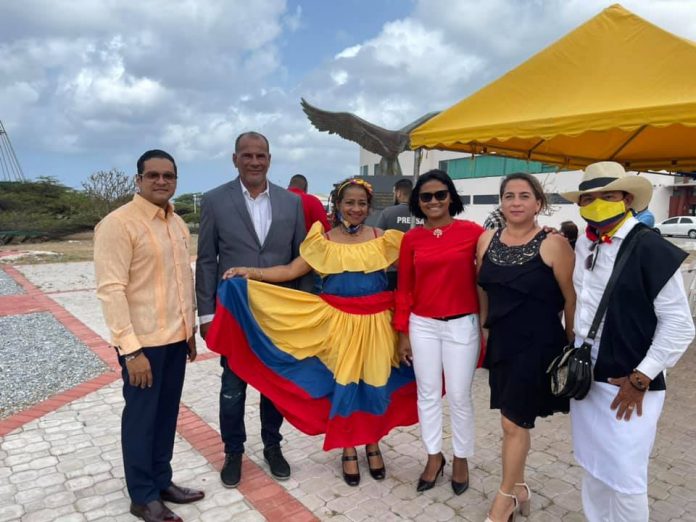 Aruba is known as an island that is home to many migrants, be it from other continents or the Latin American region. Yesterday, July 20, in commemoration of 212 years of Independence Day of the Republic of Colombia, our reporter spoke with Moises Fernandez, president of ASOCOL Aruba.

Fernandez told us that he arrived in Aruba from Barranquilla around 32 years ago, when the armed conflict in Colombia became worse in the entire region related to drug trafficking. He came to explore a change in lifestyle together with his wife and two sons.

“I had to think about the safety of my two sons. My father also migrated with my family to the United States because he was being extorted for some properties which we had in Sierra Nevada in Santa Marta”, he says.

His first anecdote in Aruba was something traumatic: the person who was supposed to pick him up from the airport when he arrived in Aruba for the first time never showed up. It turned out that he was hospitalized. But for Fernandez, starting a new life in Aruba didn’t turn out too difficult, ‘everything is a process of work, discipline and constancy’.

Regarding the process of integration, he says that he started working in a construction company and then he went to work in another company to do with air conditioning, which was Fernandez’s specialty. From there the whole panorama changed, and he managed to bring his family to Aruba, where he grew professionally and socially, adapting to the local culture.

He points out that Aruba is not the same island as it was 30 years ago. Back then, there didn’t exist a big group of Colombian nationals, there wasn’t much unity or a place to gather amongst people of the same nationality. “There was a small store owned by a countryman in Playa (city centre) where we used the place on Saturdays and Sundays to meet each other, but there wasn’t much communication like there is today”, he says.

As president of ASOCOL Aruba, Fernandez expressed that he assumed this task four years ago, and they have been working for the community, to better some aspects and help those who are in a more vulnerable position.

Regarding the most difficult moments for migrants in Aruba, both from Colombia and from other countries, it was in 2020 during the Covid-19 pandemic arrived in Aruba. “It was a very delicate situation for all of us. As I always say, we Colombians are resilient people, we adapt to any circumstance or when we are confronting a difficult situation.” He also points out that Colombians in Aruba lack an institutional organization “which will gather them, defend them and guide them with tools so that their stay in Aruba is easier.”

He feels that he is a very blessed and privileged person, because he integrated into the island very fast. He says that he started speaking Papiamento within four months. “I understood that I had to be with the local community in order to grow. This made it easier for me to integrate into the community – also because Aruba is a very special place, when you give respect, you receive respect.”

As a professional, he says that in Colombia he carried himself with a certain work ethic, which in Aruba opened many doors for him. That time it was also the case that there weren’t many people who were working in his area of expertise, something with which he received an important place and acceptance within the Aruban community. He also told us that two local families provided him with the support he needed and treated him like their own family.

For Fernandez, “Colombia is my homeland and will always be so, it is the place where I was born, grew and learned, the place where I became what I am today. And Aruba is my homeland who adopted me and allowed me to grow. It is also the place that allowed me to represent it with great honor in international sport. For me, Aruba is my second homeland, my second home, where my children grew up. Here I have everything, the fruits of my labor and my effort together with my family. It is my second nation.”

Tod and Barb honored as Goodwill Ambassadors of Aruba

A camera and a happy photographer