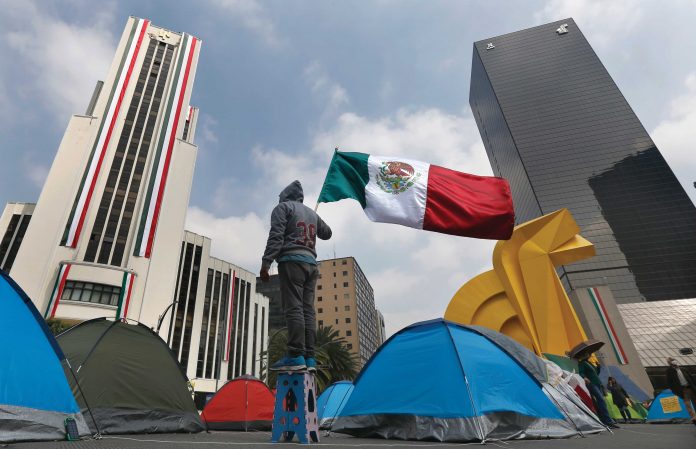 Mexican President Andrés Manuel López Obrador said Wednesday that conservative protesters demanding his resignation are welcome to camp out in Mexico City’s main plaza outside his offices in the colonial-era National Palace.

López Obrador himself led numerous protest encampments in his decades as an opposition leader, and he offered some advice to the more novice opposition of today.

“Don’t playact,” López Obrador said. “The (protest) leaders should stay to sleep” in the collection of hundreds of small tents that sprang up on an avenue leading to the plaza over the weekend after demonstrators complained that police blocked their attempt to march into the main plaza, known as the Zócalo.

The president, who is better known by his initials as AMLO, was apparently suggesting that only foot soldiers among the demonstrators were sleeping in the tents, an uncomfortable proposition in Mexico City’s rainy season.

The protest movement calls itself the “National anti-AMLO Front” or FRENA, a contrived acronym that is also the Spanish word for “brake.” The leaders claim López Obrador has accumulated too much power, has ignored checks and balances and civic groups. They are also angered by his handling of the pandemic and its economic effects.

On Sunday, the group complained that dozens of police blocked protesters from marching to the Zócalo and called it an attack on free speech. In fact, police have been limiting access to the plaza off and on since the coronavirus pandemic began as a way to enforce social distancing.

The group pledged to make another attempt Wednesday to enter the plaza, the symbolic and historical center of the city.

The protesters appear to be a little more well-heeled than those who manned communal tents for miles on the city’s main avenue for seven weeks in 2006 to protest what they claimed was electoral fraud that prevented López Obrador from winning in the first of his three runs for the presidency.

The conservative protesters sleep in their own individual or family-sized tents and appear to have a bit more camping gear that the pro-AMLO encampments of 2006 and others in the 1990s.

But it is also not clear that López Obrador followed his own advice. Toward the end of his seven-week-long encampment in 2006, many of the tents pitched along the city’s Reforma boulevard were actually empty.

While López Obrador no longer enjoys the overwhelming popularity he had after taking office in December 2018, he still appears to have the support of a majority of Mexicans.

Recovery through Creativity and Innovation

October 21, 2020
Many studies confirm the breakthrough role of creativity throughout this pandemic.

Next up in hunt for COVID-19 vaccine: Testing shots in kids

After explosive growth at Square, Chase launches own version