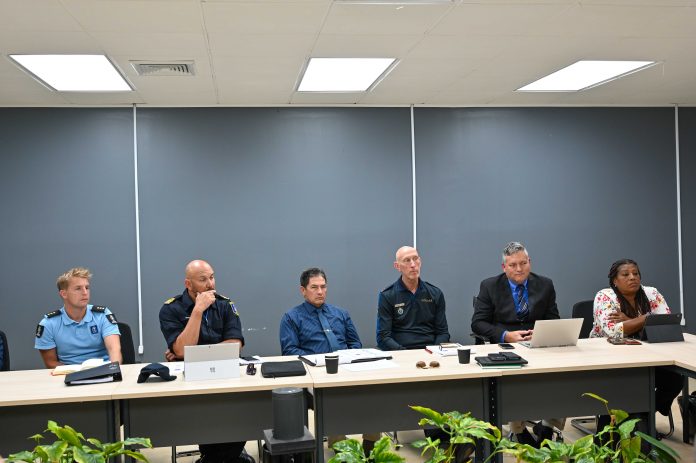 A while ago, a multidisciplinary team was installed and is preparing all preliminary work, like documents and strategic plans, for the moment in which negotiations will begin for the reopening of the border with Venezuela.

Additionally, meetings were held also with the Department of Shipping and Department of Aviation, where the harbormaster gave a wide explanation on how the work needs to be prepared before the reopening of the border.

Minister of Justice and Social Affairs, Mr. Rocco Tjon indicated that during this meeting concrete agreements were made. He said this week two pieces of advice will be received from the other two groups dealing with this subject. The first group will focus solely on the operational part. There are different models that they use that will need to be operational before the gradual reopening of the border can start. On the other hand, the other group will focus on the legal aspect, namely the management of visum and how this entire aspect needs to be put together before the negotiations can begin.

As was mentioned above, this week both pieces of advice will be received and presented to the Council of Ministers in order to make a decision for the negotiations to start. The decision has already been made that by the end of the month the group will begin with these meetings with their counterparts from Venezuela as well, thus initiating the technical consultation in order to see a realistic timeline in which all points can be operational before the gradual reopening of the border with Venezuela can begin.

In 2018, Venezuelan president Mr. Nicolas Maduro closed the border between his country and Aruba and Curaçao, accusing Aruba of stealing copper from Venezuela. At that time, the border was closed for approximately five months, until the governments of Aruba and of Venezuela reached concrete agreements under which conditions the border could be reopened. “Aruba doesn’t steal copper from anyone, and we do not accept that Aruba will get a bad reputation because of this”, Prime Minister of Aruba, Evelyn Wever-Croes said at the time.

Between May and June of that year, the border was reopened in good agreement between Aruba and Venezuela, but then, in January 2019 once again president Maduro closed the border with the ABC islands – Aruba, Curaçao and Bonaire – because Curaçao was acting as a humanitarian hub for help for Venezuela, and he considered this a reason to close the border with the Dutch islands.

In May 2019 the decision was made to reopen the border with Aruba, not with Curaçao or Bonaire as the prime minister pointed out, but Aruba was not ready to accept this as there were no agreements nor conditions under which to agree to open the border.

Foreign Relations for Aruba are a matter of the Kingdom of the Netherlands handled from The Hague.