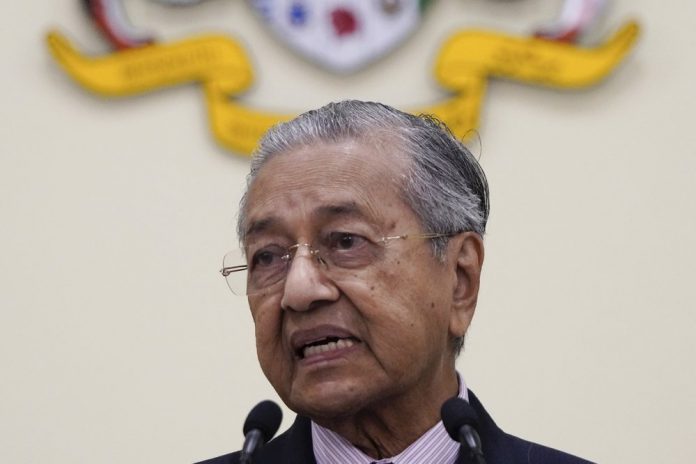 Malaysian interim leader Mahathir Mohamad said Thursday that Parliament will pick a new prime minister next week following the collapse of the ruling alliance, and that snap elections will be called if the vote ends in an impasse.

But his former alliance led by rival Anwar Ibrahim rejected the announcement, saying that only the king has the power to appoint the prime minister under the constitution.

Mahathir, who met the king earlier Thursday, said the monarch couldn’t find a candidate with a clear majority to lead the nation after consulting all 222 lawmakers over the last two days. As a result, the king decided to have the lower house of Parliament vote on a new leader on Monday, he said.

“If the lower house fails to find a person with the majority, then we will have to go for a snap election,” he told a news conference.

A failed bid by Mahathir’s supporters to form a new government without his designated successor, Anwar, and Mahathir’s shock resignation on Monday broke apart the ruling alliance less than two years after it defeated a corruption-tainted coalition that had led the country for 61 years.

Both Mahathir and Anwar are now vying for the premiership, renewing a political feud that stretches back more than two decades.

In a statement late Thursday, the three remaining parties in Anwar’s alliance said Mahathir had jumped the gun in making the announcement because the palace hadn’t issued any official statement. They said it also came ahead of a meeting of the Conference of Rulers to discuss the matter.

The Conference of Rulers is composed of nine ethnic Malay hereditary state rulers who take turns being Malaysia’s king for five-year terms under a unique rotating monarchy system. While the king’s role is largely ceremonial, the monarch is highly regarded by the country’s Malay majority as the guardian of Islam and Malay tradition.

The alliance said Mahathir’s move was akin to challenging the king’s power to appoint the prime minister and urged all sides to respect Sultan Abdullah Sultan Ahmad Shah’s authority.

Anwar was Mahathir’s deputy in the 1990s during Mahathir’s first stint as prime minister, but he was sacked following a power struggle and later jailed on sodomy and corruption charges that he said were trumped up. Anwar led a reform movement that helped build a fledgling opposition but was jailed a second time for sodomy in 2014 in what he said was aimed at killing his political career.

Mahathir, who retired in 2003 after 22 years in power, made a comeback in 2016, spurred by anger over a massive graft scandal involving a state investment fund. Mahathir and Anwar reconciled and forged an alliance that won the 2018 election, ushering in the first change of government since independence from Britain in 1957.

But their relationship remained uneasy as Mahathir refused to set a time frame to hand over power to Anwar under their election pact.

Mahathir, the world’s oldest leader at 94, said Wednesday he wanted to form a nonpartisan government if chosen as prime minister for a third time. But his unity government plan was rejected by Anwar’s camp and other opposition parties, which said it would only create a “Mahathir government” that was not accountable to the people and was unsustainable.

Lawmakers from Anwar’s alliance nominated Anwar instead as prime minister when meeting the king after Mahathir rejected their offer to restore their former government. Anwar’s camp controls 41% of parliamentary seats, 20 seats short of a simple majority.

Mahathir on Thursday also said he had rescinded his resignation as chairman of his Bersatu party.

Bersatu abandoned the governing alliance four days ago in a bid to form a new government with several opposition parties. But it flopped after Mahathir quit in protest of the plan to work with the United Malays National Organization, the party of disgraced ex-Prime Minister Najib Razak who is on trial on corruption charges, that he ousted in the 2018 polls.

Mahathir said he still cannot accept UMNO but will embrace UMNO members who leave the party. He said he still needs to discuss this with Bersatu leaders, who were willing to accept UMNO en bloc. Bersatu already joined hands with UMNO to take control of a southern state earlier Thursday.

Mahathir said he will accept the outcome of Monday’s vote and that the new leader can choose anyone he likes as his Cabinet members, alluding back to the unity government plan he proposed.

The political drama that unfolded over the weekend saw 37 lawmakers, led by Bersatu, ditching the ruling alliance, depriving it of majority support. The king dissolved the Cabinet but reappointed Mahathir as interim leader.

The crisis comes at a time of slowing economic growth, with Mahathir saying Thursday that the economy is expected to expand by 3.2% to 4.2% this year, down from the previously forecast 4.8%. He announced a 20 billion ringgit ($4.7 billion) stimulus plan to boost the economy, which has been hurt by the global outbreak of a new virus.