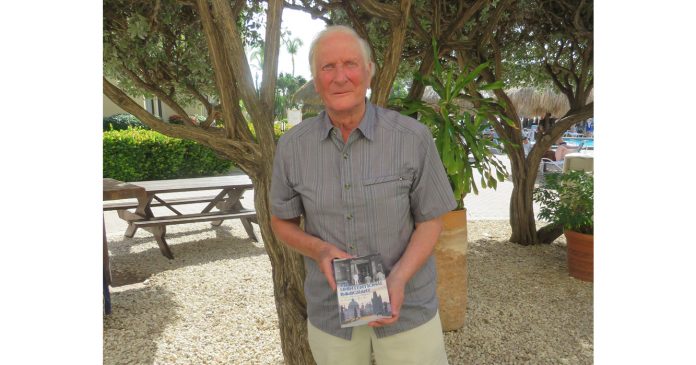 Jorge DeNapoli is the author of the book ‘The unintentional immigrant’ telling the story of his life. His journey is not a common one as DeNapoli used to be a US secret service servant for about 20 years. He also built an impressive career as a psychiatrist. In the year 1995 he and his belated wife fell in love with Aruba and they have spent more than 35 years visiting the island. “This book is my legacy to my children and grandchildren that they should know who their father was and my friends from the US and Aruba.”

Aruba Today meets DeNapoli for an interview during his vacation on the island and he is open to talk about his extraordinary life. “I graduated from the University of Buenos Aires medical school, I am Argentinean and after two years of practicing surgery I decided to move to the United States to specialize in some branch of surgery. In those days of course we did not have internet so the only means of communication was by telephone which took hours to do it. Another form was to write to different hospitals where I was going to do a rotating internship at first.” One hospital in New York City answered that they would accept him right away and of course he was delighted. “I was a city boy and moving to fantastic New York was a dream. But when I got there I was surprised because it was a hospital in Harlem and it was not up to standards. I did my internship there but when I tried to apply for surgical service they wouldn’t accept me. Number one because I was a graduate from a foreign medical school and number two because my internship was at a substandard hospital.” He decided to go back to Argentina but he had no funds to go back when a friend of his who was doing psychiatry told him that state psychiatric hospitals in Massachusetts are taking doctors and pay a good salary. “I was actually there to make money to return to Argentina. I had a student visa which I had to turn into a working permit, a green card. I worked there about two years when I met this crazy nurse,” he laughs. They fell deeply in love and they decided to get married. “I made psychiatry my career and went working at a hospital in New York State. I got my degree in psychiatry and that’s why the title of the book is The Unintentional Immigrant because it was not my idea to stay.”

Eventually the couple returned to Massachusetts where DeNapoli opened a psychiatry practice and they got four children. “A friend decided to run as US Representative and he wanted me in his campaign team because I understand human behavior and so I did. We travelled to Washington many times and I was introduced to a lot of people.” He received a phone call two years later from someone in Washington from the intelligence services wanting to recruit him to be part of the office of strategic information. It sounded interesting to him but he thought: this must be a joke, my friends are setting me up. “We had planned to meet and I expected my friends to be there laughing their hats off. But it was for real, he was from the Strategic Service Department, now called the CIA. He explained what they wanted from me.” They were recruiting people who could travel throughout Europe without arising any suspicion. Business men, professionals, academia, entertainers and so DeNapoli became part of this undercover group. “I was young and I wouldn’t pass a challenge. I could not even share this with my wife. She nor my children knew about this. I would always find my way to schedule time for the secret services.” He needed to attend medical congresses in Europe so it was not so difficult to disappear for some hours. His task usually was to gather information on certain persons. “I was not a James Bond doing stunts while being surrounded by beautiful women, but there were certain risks involved.”

DeNapoli and his wife came to Aruba for the first time in 19915. “It was still a quiet place. They purchased time share at the Casa del Mar Beach Resort & Timeshare and the Playa Linda Beach resort & Timeshare. “We fell in love with Aruba because of the friendly people, they are very accommodating and helping you in any possible way. At that time most workers were Arubans, now we notice most are Spanish speaking. We became friends with many Arubans and we felt part of the community.” This became their second home and now he comes here with his children. “My wife and I had a great relationship for almost 56 years, she passed away 5 years ago.”

He states: “The book is about my life, my journey to the US as an immigrant and adapting to a new society. It is also about contributing to the country that gave me a life, a wife and children. It is my way of paying back. The book is also a message to immigrants who come to the US to learn that it requires hard work to adapt and that you have a duty to contribute to the country you have chosen to make your life.”