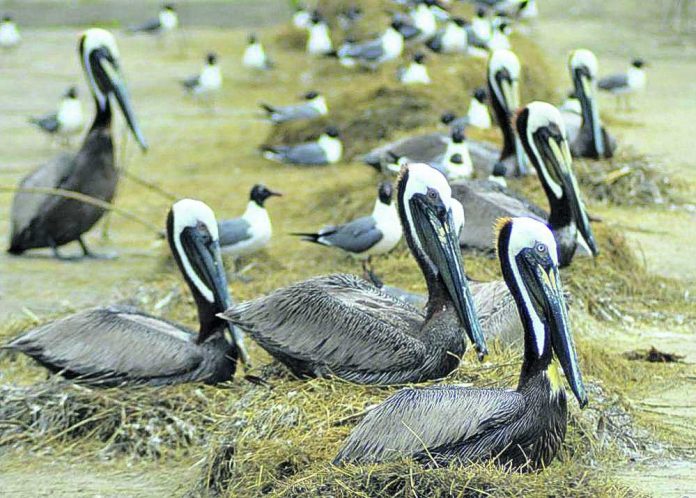 RABBIT ISLAND, La. (AP) — Restoration of an island in Louisiana’s fragile coastal area is proving wildly popular with the birds it was rebuilt for, their numbers exploding on the recently added land, authorities said Wednesday.

Pelicans, egrets, herons, ibis, terns, and other colonial water birds built about 6,100 nests on Rabbit Island — more than 16 times the number biologists had expected, a news release from the Louisiana Coastal Protection and Restoration Authority said.

The island supports the only brown pelican colony in southwest Louisiana, and about 1,500 pairs of pelicans were among the nesting birds. They included many of the 322 pelicans banded there this year and last, the agency said.

Rabbit Island had eroded from nearly 290 acres (117 hectares) to about 200 acres (80 hectares) — with most of that either under water or so low that high tides regularly covered nests.

Dredging began last fall, adding 102 acres (41 hectares) rather than the 88 (36 hectares) planned and creating an expanse up to 3.5 feet (about 1 meter) above sea level.

Settlement money from a devastating 2010 oil spill paid by energy giant BP funded the $16.4 million project run by the coastal authority and the Louisiana Department of Wildlife and Fisheries.

Federal scientists estimated that the spill killed up to 102,000 birds Gulf-wide, though later studies put the figure much higher. Anywhere from 12,700 to 27,600 pelicans were killed, according to the National Oceanic and Atmospheric Administration. Experts say the pelicans have recovered well, unlike longer-lived corals and dolphins.

Hundreds of birds rescued from the spill were released on Rabbit Island after having oily gunk washed from their feathers.

Sediment dredged from the Calcasieu Ship Channel raised and expanded the island, which lies about 6 miles (10 kilometers) from Louisiana’s southwestern coast, in a cove of Calcasieu Lake.

Twelve species nested there this year, 10 of them considered “species of greatest conservation need” by Louisiana. All were among species hardest hit by the BP oil spill, the coastal authority said.

Grasses and shrubs will be planted to make it even more attractive to the birds.

The project started as a collaboration between Cameron and Calcasieu parishes, said state Rep. Ryan Bourriaque, a Republican from Cameron Parish.