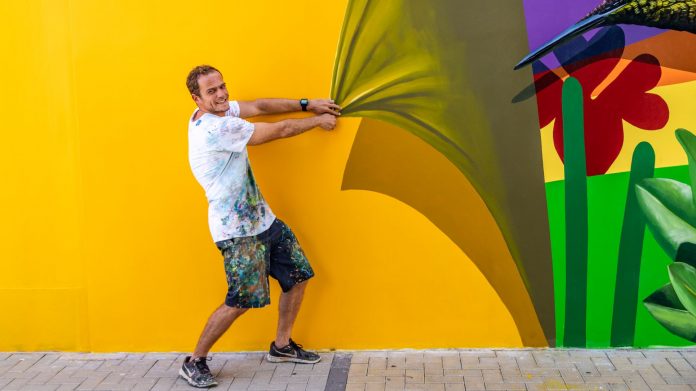 The community of Aruba and its visitors can all enjoy a new mural in the center of San Nicolas. A.T.A commissioned a local artist, Armando Goedgedrag to create a new mural.

Recently, Armando presented this mural and gave an explanation of the idea behind this mural to many including the San Nicolas Business Association. Armando highlighted that he felt proud to be able to create art for San Nicolas that is so special to him and his family. His grandfather was an employee of Lago, Aruba’s refinery back then and his family members are residents of Weg Sero Preto.

The mural that Armando created is part of a campaign with the goal to motivate visitors and locals alike to take care of nature and Aruba.

Armando explained that this mural focuses mainly on nature, something that he loves to paint. Gutu (Green Parrot Fish), Blenchi Berde (Blue-Tailed Emerald) that can be seen on Aruba also as a Blenchi Cora (Ruby Topaz Hummingbird) are all species that belong to Aruba. The yellow and orange colors are a symbol of the rising of the sun, which is an homage to San Nioclas as the ‘Sunrise City’. The symbols representing the traditional houses of Aruba were included as cultural elements. To give everything a colorful finish, the radiant colors of the beaches and mangroves were included.

This mural has an interactive element where both visitors and locals can stand at the corner of the mural, and place their arms in a way that it looks like they are ripping a page revealing the mural behind it. In the photos Armando can be seen demonstrating this interaction.

Soon a QR code will be distributed by A.T.A where more information about the mural can be found.

Collaboration of the organizations leads to success during this pandemic; Aruba...