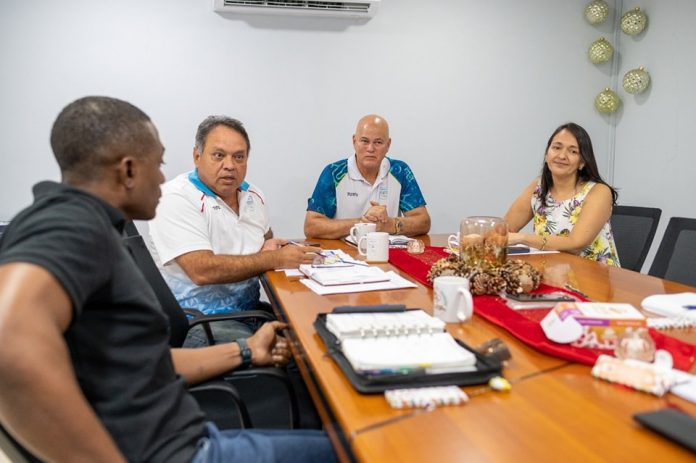 “Since the year 2019, I have been working in collaboration with the Aruban Olympic Committee. This began since the Panamerican Games in Lima, Pery, where Curaçao competed under the flag of Aruba with three athletes, since they were not able to participate representing Curaçao”, he said. “After this we began evaluating how we can continue helping high-performance athletes from Curaçao to continue participating under the umbrella of the Aruban Olympic Committee, but in this case, receiving financial and technical help from Olympic Solidarity of the International Olympic Committee, IOC.”

According to Mr. Doran, time was dedicated to analyzing the entire process under the technical direction of the Aruban Olympic Committee and to reach an agreement so that some athletes can begin with the preparation process for classification for the Central American and Caribbean Games in San Salvador, as well as the Panamerican Games in Santiago 2023.

Athletes AmirDaou, Philip Elhage (shooting), Ingrid Gonesh (mixed team shooting), Just van Aanholt (sail), and Rob Timmermans (karate) are already busy with heavy preparations for this and are in the program of the Aruban Olympic Committee.

Cyclist Lisa Groothuesheidkamp confronted certain difficulties to complete the process of changing the license in order to be able to compete for Aruba.

The Curaçaoan athletes are already working according to the rules and criteria placed by the technical direction of Aruban Olympic Committee, and each of them must comply with all the requisites in order to be part of the classification program and also to receive the necessary help coming from the IOC.

Taking into account the new policy of the Aruban Olympic Committee after the Covid-19 pandemic, everything was adapted, and the Curaçaoan athletes who have an interest in participating under the Aruban flag became aware of this. Here communication plays a big role so that the Curaçaoan athletes can be constantly aware regarding the development of the process and program of the Aruban Olympic Committee, and it is here where the involvement of Mr. Doran is crucial, to avoid any eventuality.

The role of Thakai Doran in Curaçao means that he is the point of contact for the athletes in Curaçao who have a wish to enter the program of the Aruban Olympic Committee, as well as helping the federations in Curaçao that want to compete in the Panamerican Games, by contacting the Aruban federations to see if work can be done in this regard.

Finalizing, Doran said he is very thankful for these opportunities, seeing that Aruba is awarding the possibility for athletes from Curaçao to compete in a higher level of world sport.

Time to invest: Premium condominium and house prices in Aruba are...

Aruba to me: Michelle Fay