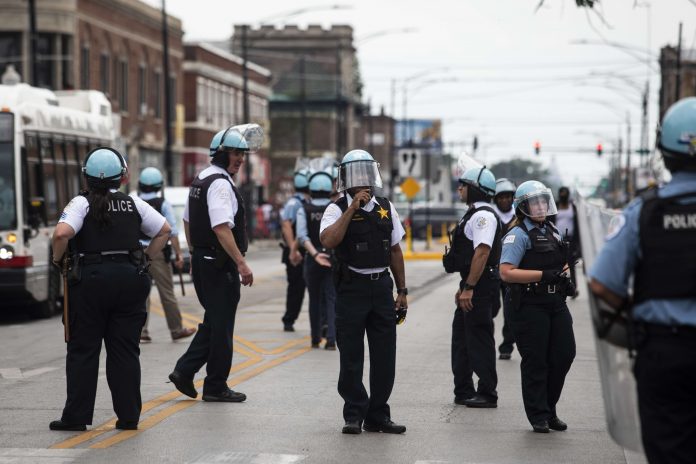 A police force with a history of brutality and racism created a new crime-fighting team, but on one of its first forays into the streets, the group did not wear body cameras, which would have shown whether a man accused of firing a gun at officers was, in fact, armed.

That’s where the Chicago Police Department finds itself in the wake of a police shooting of a Black man that prompted hundreds of vandals to descend on the city’s famed Magnificent Mile shopping area, where they smashed store windows and made off with everything from clothing to cash registers.

Latrell Allen, 20, appeared in court Tuesday on charges of attempted murder and was ordered held on a $1 million bond. Police said he fired at officers before they returned fire and wounded him. Authorities have said they found a gun at the scene, but they acknowledge that the officers who shot him were not wearing cameras.

Investigators have reviewed video from a surveillance camera that captures the pursuit of a man matching Allen’s description, but the Civilian Office of Police Accountability, or COPA, has not found video that shows Allen was carrying a gun, spokesman Ephrain Eaddy said.

In announcing that the officers were not wearing body cameras, the police department stressed that it “understands how technology can support accountability and transparency.” In the past, the department has pointed to its rollout of body cameras as among the most extensive of any police force in the nation.

But department spokesman Howard Ludwig said citywide teams, including the team that Superintendent David Brown created last month to respond to crime hot spots, do not yet have the cameras.

“It’s a matter of resources,” Ludwig said. “We don’t have enough to go around.”

The department said it is working on changing that, announcing in a news release that getting the cameras to that team and another similar group was a priority under the 2021 budget.

On Tuesday, both Brown and Mayor Lori Lightfoot said the department is working to get cameras to as many officers as possible. Both of them suggested that the effort to put more uniformed officers on the street led to a shortage of cameras.

Lightfoot, who started trying to equip more officers on the street with cameras even before Sunday’s shooting, said, “We can’t have people out on the street interfacing with the public on a regular basis who don’t have body cameras.”

But those comments after another police shooting do little to address suspicions in the city, both about the kind of units Brown has created and the department as a whole.

More than a decade ago, another citywide crime-fighting unit called the Special Operations Section was disbanded after an investigation revealed members were robbing drug dealers and committing home invasions and other crimes. Other units were disbanded after Mayor Rahm Emanuel took office amid concerns that their tactics sowed more public mistrust.

After Allen was shot on Sunday, activists immediately seized on the news that the officers were not wearing body cameras. Black Lives Matter Chicago issued a statement questioning the department’s version of events.

“These details are uncorroborated, partially because CPD also claims there is no body camera footage available for this interaction,” the group said. Soon activists were organizing another demonstration outside a South Side police station to protest what they called the “attempted murder” of Allen.

Questions about the lack of body cameras extend beyond activist groups. One law enforcement expert found it baffling that the department did not equip with cameras officers whose job it is to wade into violent situations in a city where there remains widespread suspicion of police.

“It is really shocking, actually,” said Wesley Skogan, who studies crime and law enforcement at the Institute for Policy Research at Northwestern University. “Without body camera footage, it (the shooting) will be disputed until the end of time.”

Cameras have played a prominent role in the recent history of the Chicago Police Department. Dashboard cameras led to murder charges against a white police officer in the 2014 shooting death of Black teenager Laquan McDonald. That was the first conviction of a city cop for an on-duty shooting in decades.

Without the video showing the teen shot 16 times, the investigation may have begun and ended with the false contention of officers at the scene that the teen lunged at officer Jason Van Dyke before he fired.

Chicago police have also used body camera footage to show that officers acted properly, possibly heading off the kind of rampage that unfolded this week. In 2018, for example, then-Police Superintendent Eddie Johnson ordered the release of a video that showed a fleeing suspect not only had a gun in a holster at his hip, but that he reached for his waist before officers opened fire, killing him.

“The community needs some answers, and they need them now,” Johnson said of his decision to release the video of a shooting that prompted protesters to throw rocks and bottles at officers.