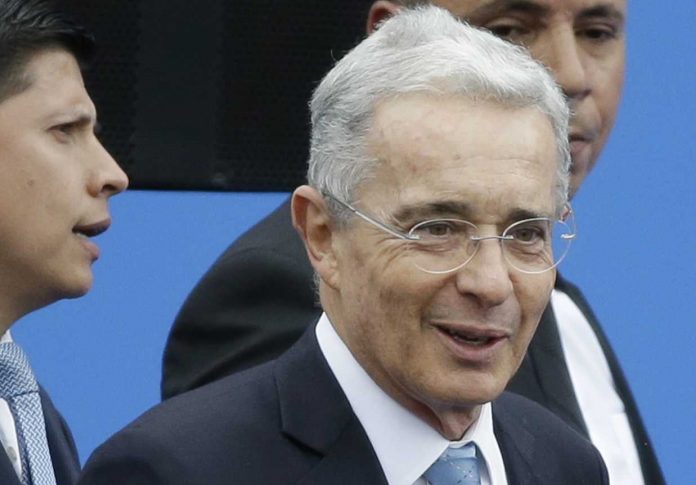 Powerful ex-Colombia President Álvaro Uribe was ordered freed from house arrest Saturday while he is investigated for possible witness tampering, the latest chapter in a case that has revealed lingering tensions over the country’s peace process.

The nation’s Supreme Court had ordered Uribe detained in August during the probe, shocking Colombians and unleashing protests in favor and against the decision. He was the first president in Colombia’s recent history to be ordered placed on house arrest.

But municipal Judge Clara Salcedo ruled Saturday during a virtual hearing that the prior ruling could not be upheld under a new legal framework under which Uribe is being investigated since resigning his Senate seat after his detention.

“Thank God,” Uribe wrote on Twitter as the decision was read.

The decision can be appealed but Uribe was immediately ordered released.

The Supreme Court argued in its 1,554-page decision in August that there was ample evidence to show Uribe had engaged in trying to pressure former paramilitaries into retracting damaging statements against the ex-president. But the high court later relinquished control of the case when Uribe resigned his Senate seat, handing it to the chief prosecutor’s office.

Magistrates have since ruled that Uribe should be tried under a different legal framework designed for ordinary citizens, paving the way for his release.

The former president’s lawyer argued that because Uribe is only under investigation and has not been charged he should be freed. Prosecutor Gabriel Ramon Jaimes agreed, telling the judge he believed that Uribe’s due process rights had been violated, but he has stressed that the investigation continues.

“My request today is not a prelude of procedural steps still to come,” he said Thursday. “There will be no impunity. There will be justice.”

Uribe has vehemently denied the allegations.

His supporters contended the house arrest decision was unfair because ex-guerrillas have been allowed to remain free while they testify about war crimes. His critics argue that the courts have effectively turned a blind eye until now toward numerous accusations that Uribe had ties to paramilitary groups during the conflict.

Such groups were organized by wealthy landlords, sometimes with the complicity of the state, to fight guerrillas who espoused a leftist ideology while often resorting to kidnapping and extortion.

“The victims demand truth, justice and reparations,” he said. “And the justice system should provide effective answers but always within the confines of the law.”

The case has sparked long simmering tensions over Uribe’s legacy in Colombia and how to handle those suspected of crimes during the nation’s long conflict between the state, paramilitary groups and leftist guerrillas that left hundreds of thousands dead or missing.

Uribe is widely credited in Colombia with leading a military offense that pushed the rebels to the negotiating table and the signing of the 2016 peace accord. President Donald Trump tweeted congratulations to Uribe after Saturday’s ruling, praising him as a “hero” and U.S. ally in opposing the socialist government in Venezuela.

But Uribe’s record is also riddled with accusations of human rights abuses. During his presidency, military officers killed thousands of poor peasants and passed them off as guerrillas to inflate body counts and get bonuses. Allegations of ties to paramilitaries have dogged him for years.

The Supreme Court’s lengthy ruling ordering his house arrest contains transcripts of numerous intercepted calls and covertly recorded conversations in which the former president pushes his lawyer and allies to pressure ex-paramilitaries into testifying that he had no ties to them.

A recently declassified U.S. Department of Defense memo shows at least one high-level official believed that Uribe “almost certainly” had dealings with paramilitaries.

Uribe has denied those accusations, saying they are part of a plot against him.

Francisco Bernate, a lawyer and professor at Colombia’s Rosario University, said the next step will be for the chief prosecutor’s office to decide if charges should be filed.

“The ball is totally in the hands of the chief prosecutor to decide the luck of the ex-president,” he said.

Iván Cepeda, the opposition lawmaker whose initial accusations against Uribe sparked the case, vowed to appeal the ruling, contending that the prosecutor handling the case showed partiality toward the ex-president during the hearing.

“We believe there is no guarantee for the rights of victims in this case,” he said.

The ruling comes as Colombia is grappling with implementation of the peace accord ending Latin America’s longest-running conflict. The deal remains divisive and many Colombians believe the terms are far too generous toward ex-combatants. Under the agreement, most are allowed to remain free so long as they confess their crimes.

Proponents of the accord say such concessions are necessary and irrevocable in order to move past a bloody chapter in the nation’s history.

Unlike in the aftermath of the Supreme Court detention order, there were no immediate protests in favor or against the decision to free Uribe. Current President Iván Duque, an acolyte of Uribe, did not issue any quick comment on the ruling as he did after the ex-president’s house arrest two months ago, much to the criticism of human rights groups who accused him of meddling in judicial affairs.

José Miguel Vivanco, the Americas director for Human Rights Watch, noted that the ruling Saturday is not a judgment against the Supreme Court’s detention order but a procedural interpretation of the law under the new framework.

He called on Colombians to respect the judge’s decision regardless of their opinion.

“That’s what Uribismo did not do when the Supreme Court ordered Uribe’s detention,” he said. “But it’s what all Colombians should do now.”

‘Finally’: France seeks to set age for sexual consent, at 15