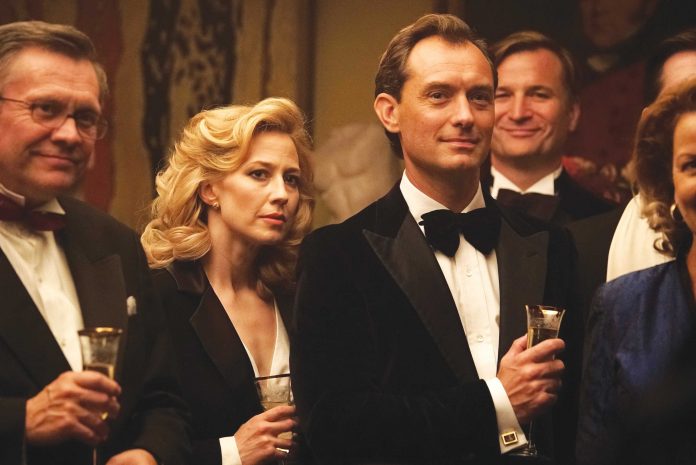 Carrie Coon so badly wanted the slow-burn familial drama “The Nest” to be made, she told its director that she’d step aside so that he could cast “someone more famous” in her role.

“The Nest,” which is now playing in select theaters nationwide, is writer-director Sean Durkin’s first in almost 10 years. His debut, “Martha Marcy May Marlene,” was a critical darling and had a breakout role for Elizabeth Olsen, but in the years since the “mid-budget” films that he wanted to make became even rarer in a franchise-obsessed ecosystem.

“It just goes to show how you can be successful and make a very fine and compelling and critically well-received film and still not be able to get something made,” Coon said.

Coon had signed on early to play Allison, one half of a married couple who leave their happy life in the U.S. for the promise of a grander one in the U.K. in the mid-1980s. The “Leftovers” and “Fargo” actor has a devoted base, but she also knew that it would take a star to get “The Nest” made. She said to Durkin and his producer that they may need to “let her go.”

Durkin, for his part, declined her offer. And thankfully Jude Law entered the picture not too long after.

“Like most people, I was I was just curious to know what Sean was going to do next,” Law said.

In Durkin’s script, he found an intriguing challenge in the character of Rory, an entrepreneur whose dreams of a high society life have started to curdle into delusion. When he moves his wife, stepdaughter and son to a stately old mansion in Surrey, the veneer on their yuppie life starts to fade.

“I kept trying to color him so that he was attractive before he became destructive,” Law said.

Although Law and Coon were strangers coming into “The Nest,” they quickly found that they shared a common language in the theater. And Durkin’s style of filming, long takes from a distance, complimented their stage backgrounds.

“We of course enjoyed that aspect of playing a scene in its entirety and knowing where you go in isn’t where you’re going to come out,” Law said. “You’re going to let the scene affect you and carry you.”

Coon was excited to discover that her co-star was “delightful” and “unguarded,” which she said can be rare for someone so famous.

“So much of the tone is going to get set by him. And it was such a great energy. He’s such a generous and open person,” she said. “And he was so lovely with the kids (Oona Roche and Charlie Shotwell). He wanted to make sure the kids understood that they were just as much a part of this film, that they should feel free to make choices, that their choices were valid.”

“The Nest,” which has been described as a ghost story without ghosts, is a work of fiction, but Durkin did draw some inspiration from his own life. He spent “a good portion” of his childhood in England and moved to New York at age 11.

“Nowadays the move between New York and London is a very seamless one, but at the time, in the late ’80s, early ’90s, there was a very stark difference in atmosphere and feel,” Durkin said. “I wanted to capture that.”

The eerie tone he sets is juxtaposed with a vision of 1980s elegance rarely seen in period films.

“One of the first things I said to my costume and makeup and art teams is that when people make films about the ’80s, they have too much fun with it,” Durkin said. “If you look at the real references in family pictures and pictures from the street that aren’t the pop references, it doesn’t look very different from today.”

Law said the set and costume design kicked back memories from the time, like a particular pair of shoes he coveted as a young teen

Coon, who was a child in the mid-’80s, dyed her hair a honey blonde shade that was specific to the era and said that she got to wear “better clothes” than she remembered from the time. “I got the best of the ’80s palette,” she said, including a reproduction of a stunning black and white suit inspired by a Chloe advertisement.

But at the heart of it, behind the wealth signifiers, the chinchilla coats and the earnest class climbing, is a marriage and a family that’s being redefined under the societal pressures of a new environment.

“It was a really egalitarian marriage in a time when that was unusual and she’s thrust into a position of being more of a housewife than she’s ever been. She feels uncomfortable in this new arrangement because it doesn’t suit her,” Coon said.

“I’ve never seen marriage dealt with in a film this way. It felt like a very truthful look at the tacit agreements we make. And marriages are built on much less than these two have.”

Director James Burrows looks back on his career in new book

Review: A portrait of a Putin opposition leader in ‘Navalny’