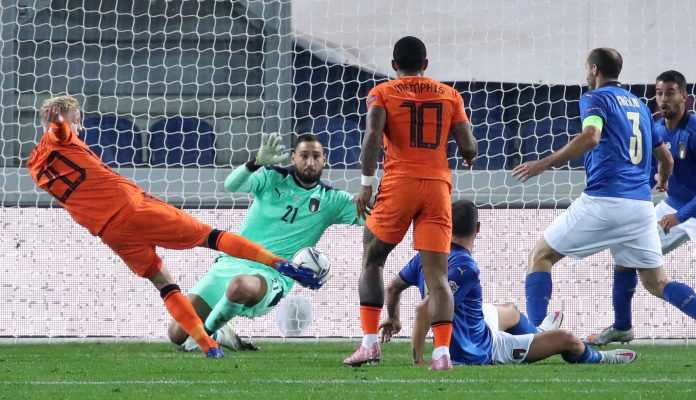 Italy slipped to second in its Nations League group after it was held to a 1-1 draw by the Netherlands on Wednesday in a game that paid tribute to Bergamo’s many victims of the coronavirus pandemic.

Poland moved top of Group 1 in League A after beating Bosnia-Herzegovina 3-0. It has a point more than Italy and two more than the Netherlands.

“No problem, we’ll win both the matches and we’ll qualify for the final phase,” Italy coach Roberto Mancini said.

It was the first time in 14 years that Italy played a match in Bergamo, one of cities hit hardest by the coronavirus pandemic. Before the game, a delegation from the federations of the two teams laid two wreaths at a cemetery in the city in tribute to the victims.

One of the stands of the stadium was covered in a huge Italy flag and, after the national anthems were played before kickoff, the Azzurri players turned to the main stand and applauded the health workers and 243 mayors from the province who were among the 1,000 spectators invited to the match.

Italy took the lead in the 16th minute. Nicolò Barella played a perfect through ball for Pellegrini to run onto and drill past Netherlands goalkeeper Jasper Cillessen.

The Netherlands had scored just one goal in three matches but leveled with its first real opportunity nine minutes later as Van De Beek fired into the roof of the net from close range after a series of attempts had been charged down.

Italy had a number of chances to restore its lead but the Azzurri were thwarted by several saves from Cillessen.

“The Netherlands is a strong team, with great players,” Mancini said. “They put us in difficulty but that’s okay, it hadn’t happened to us for a long time.

“We attacked, they did too. But it was us who had the best chances.”