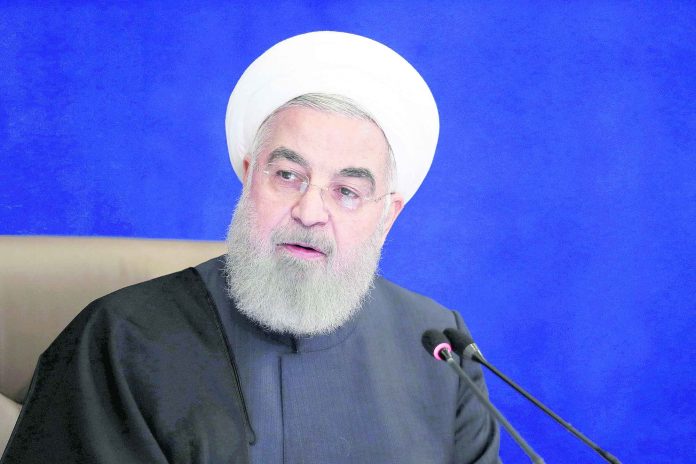 Iran’s President Hassan Rouhani said Wednesday that U.S. sanctions are making it difficult for Iran to purchase medicine and health supplies from abroad, including COVID-19 vaccines needed to contain the worst outbreak in the Middle East.

President Donald Trump’s administration has imposed crippling sanctions on Iran’s banking sector and its vital oil and gas industry since unilaterally withdrawing the U.S. from Iran’s nuclear deal with world powers in 2018.

While the United States insists that medicines and humanitarian goods are exempt from sanctions, restrictions on trade have made many banks and companies across the world hesitant to do business with Iran, fearing punitive measures from Washington. The country is also cut off from the international banking system, making it difficult to transfer payments.

“Our people should know that for any action we plan to carry out for importing medicine, vaccines and equipment, we should curse Trump a hundred times,” Rouhani was quoted as saying by the official IRNA news agency.

He said even simple transactions to purchase medicine from other countries had become extremely difficult and that it can take “weeks” to transfer funds.

Rouhani said authorities are nevertheless doing what they can to buy vaccines from abroad, hoping to deliver them to high-risk individuals as soon as possible.

Last week, Iran said it is working on its own vaccine, with testing on human patients expected to begin next month. It plans to buy 20 million vaccine doses from abroad, for a population of more than 80 million people.

Iran has reported more than 50,000 deaths from the coronavirus out of more than a million confirmed cases — the worst outbreak in the Middle East.

Authorities have been reluctant to impose the kind of lockdown measures seen elsewhere in the region, partly because of concerns it would further exacerbate an already dire economic crisis. The sanctions have contributed to a plunge in the country’s currency in recent years that has caused the price of basic goods to soar and wiped out many Iranians’ life savings.

In a separate development, Iran’s foreign ministry on Wednesday imposed sanctions on the U.S. ambassador to Yemen, Christopher Henzel, because of his alleged help “in organizing, providing financial and arms support” to the Saudi-led coalition waging war in Yemen against the country’s Houthi rebels.

Under the measure, which is mainly symbolic, Henzel would be denied an Iranian visa, should he ever apply for one. He is also barred from holding any accounts in Iranian banks and financial institutions and having financial transactions with Iranian entities.

On Tuesday, the Trump administration said it imposed sanctions on Iran’s envoy to Yemen’s Houthi rebels, Hasan Irlu, and the Iranian Al-Mustafa International University for alleged recruiting fighters for the paramilitary Revolutionary Guard to foment instability in Yemen and in Syria.

Iran and the U.S. support opposite sides in Yemen’s conflict. In August, Iran imposed similar symbolic sanctions on Richard Goldberg, a hawkish former expert with the White House National Security Council. And in 2017, Iran sanctioned 15 American companies over their alleged support for Israel, terrorism and repression in the region.

Afghan forces retake prison after deadly attack by IS group