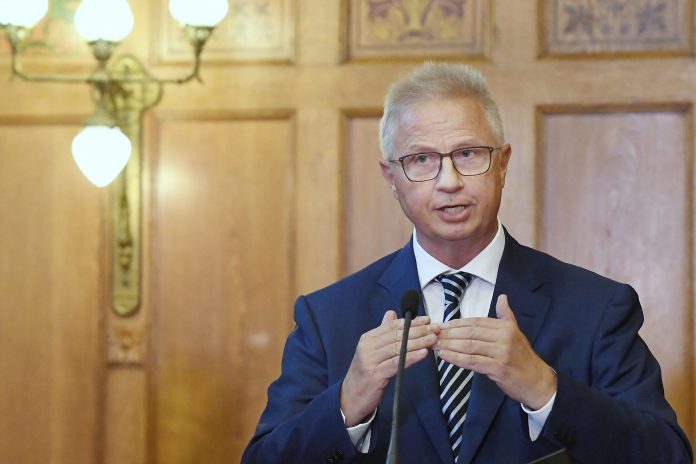 Hungary’s prime minister said Friday that Western countries in the European Union are suffering from “enlargement fatigue” and using newer members as a scapegoat for their problems.

“Those in the West are exhausted from enlargement,” Prime Minister Viktor Orban said on state radio, adding that there was a mistaken view in Western Europe “that if expansion had not taken place … then the Western half of the continent would perform much better.”

Orban also said that if countries like Serbia had been part of the EU already during the 2015 migration crisis, “illegal migrants wouldn’t have reached Germany.”

Orban, who in 2015 ordered fences protected by razor wire built on Hungary’s southern borders with Serbia and Croatia to stem the flow of people trying to reach Western Europe, said that had North Macedonia, Serbia and Montenegro been in the EU at the time, the migrants would have been stopped there after going through Greece.

Orban said he was pleased that former Hungarian Justice Minister Laszlo Trocsanyi has been selected as EU commissioner for neighborhood and enlargement issues, even if he expected the nominee to encounter “heated moments” during upcoming hearings before the EU parliament’s vote on the new EU Commission.

Hungary is facing EU action regarding the rule of law and democratic procedures, including over laws enacted during Trocsanyi’s ministerial tenure, but Orban said there could be no professional objections to Trocsanyi, who earlier was an ambassador and a member of Hungary’s constitutional court, only “that he is Hungarian.”

Hungary has been a strong advocate for EU enlargement, even despite snags in bilateral relations with some of its neighboring countries — earlier with Serbia or Romania, for example, and now with Ukraine — over the rights of Hungarian minorities there.

Trocsanyi’s nomination was welcomed by authorities in Serbia and the Serb-run part of neighboring Bosnia, who have close relations with Orban.

“It is important that this is someone from the region, someone with a balanced approach, someone who is an honest friend of the region,” Serbian President Aleksadar Vucic said.

Asked about Trocsanyi’s nomination by a Serbian reporter during a meeting of regional leader Thursday in Prague, Orban said: “If I were a Serb, I would be happy.”

Bosnian Serb leader Milorad Dodik, who is the Serb member of Bosnia’s multi-ethnic presidency, also said it was “important” that the new enlargement commissioner would be from Hungary.”

“They have a better feel for the Balkans than some other European countries,” Dodik said.

“He will have a tough job to, on one hand, try to revive hope of a European perspective” among the countries in the Western Balkans, following widespread disappointment after the latest EU summit, Grubjesic said in a telephone interview. “Even a tougher job would be to convince the EU member states to put back enlargement high on their agenda.”

Others in the Balkans, however, were skeptical about Trocsanyi, especially on how much he would focus on bringing the rule of law in the candidate countries up to EU standards.

Bosnia’s Klix news portal, for example, carried analysis headlined “Why the appointment of Trocsanyi may be the worst signal for Bosnia from the EU in the last five years.”

Edit Inotai, a senior fellow at the Centre for Euro-Atlantic Integration and Democracy, a Budapest-based think tank, said press freedoms or judicial independence would be not a priority for the Hungarian commissioner candidate.

“Trocsanyi will not make strong demands for the strengthening of the rule of law in these countries,” Inotai said. “Instead, he will emphasize how important enlargement is for the EU from an economic or security perspective, or to avoid the advance of Islam, Turkey or Russia in the region.”q