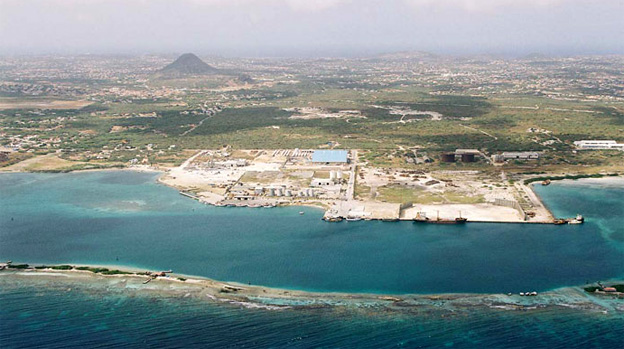 ORANJESTAD – Recently in the local news, the issue of the switch from heavy fuel oil (HFO) to liquid natural gas (LNG), so that WEB Aruba NV can use it to generate energy for NV Elmar Aruba has been prominent. LNG will be healthier for people and environment, and will reduce the price of water and electricity.

Utilities Aruba N.V., representing the government of Aruba, gave the American company Eagle LNG from Texas the mandate to execute the plan for this proposed switch. This is a secret contract bound by a non-disclosure agreement, negotiated y Eagle LNG. All information in this contract regarding how, when, who, and the risks, etc, in this contract are not available to anyone.

Eagle LNG began with information sessions for interested residents and began visiting homes in the pertinent neighborhoods, with representatives from Eagle LNG talking about the placement of gas pipes in resident’s streets or general area.

In the past, Eagle LNG spoke of placing a gas pipe on the surface, from the refinery RdA to WEB Aruba NV on the same route where currently there are three pipes. This plan changed, and now Eagle LNG wants to dig a tunnel to place the gas pipe under the surface. In some areas, the intention is to dig the road in front of houses to lay the pipe. Eagle LNG says that this process is very safe and does not carry risks for the residents and their homes.

But from information received and investigated online by the residents themselves, it turns out that the placement of gas pipe under the surface carries great risk. The pipe running from the refinery to WEB Aruba NV will be a pipe for transmission of gas, which is under a lot of pressure. The pressure is necessary for WEB to maintain its equipment in continuous functioning.

A group of citizens calling itself Group Against Gas Pipe (Grupo Contra Tubo di Gas), residents in the area of Balashi, Pos Chikito, Savaneta and Cura Cabay, say they came together to demand that Eagle LNG and the government of Aruba recognize and guarantee their right to live in peace, without fear for their safety and without losing the value of their property. For this reason they are urging Eagle LNG and the government to install the LNG tank in Barcadera and limit the risk to their neighborhoods. This is based on investigation by their own experts.

According to Dutch and American norms, a gas transmission pipe is not allowed to go under inhabited areas. Representatives of Eagle LNG told those they visited that the pipes are similar to the gas lines running in Dutch and American cities. However, this is not correct because this is talking of a distribution pipe. In Aruba, the only place where there will be a gas distribution pipe will be at WEB Aruba NV itself, distributing for the machinery.

The system is comparable to the pipes for kitchen gas (LPG). But for WEB Aruba NV to get this gas (which will later need to pass through the distribution lines) it will require a bigger pipe, which then comes with a higher pressure and a lot more gas (higher mass) from RdA. It is these pipes with a higher mass of gass that will pass by, below and surely close to people’s homes, retirement home Huize Maristella, schools and places frequented by many tourists, according to the group of citizens.

Not a lot of details are known, and this is also the reason why Marinierskazerne – the Dutch army base in Aruba – cannot give approval for the pipes to run through its land until it receives specifications from Eagle LNG, something that has not taken place yet.

And now the citizens found out that WEB Aruba NV itself is working on a plan to use LNG. Already experts from WEB Aruba NV took into consideration to minimize all the risks for the residential neighborhoods by putting the tank for the gas right next to WEB Aruba NV itself, in Barcadera. The Barcadera quay will be expanded so that the LNG ships can dock there and transfer the gas from a pipe to the tank. WEB Aruba NV even gave information sessions (roadshows) in 2018 and 2019, but sadly this plan was cancelled in February 2021.

The group clarifies that they are not against LNG. They also see the benefits of LNG, but they are extremely concerned for our people, our homes and our neighborhoods in case that the project for the gas pipe continues in the way Eagle LNG intends. They will do everything they can to avoid a gas pipe from running through residential zones.

A leak, a spark and you can have an explosion of 33 meters around the point of explosion or a length of 66 meters. This means an entire neighborhood would be wiped off the map, with enormous consequences for human life and property. Eagle LNG on its own website says that when there is a gas leak, an area of 100 meters needs to be evacuated. How can this be done effectively, if there are so many houses around the pipe?, the group concludes.