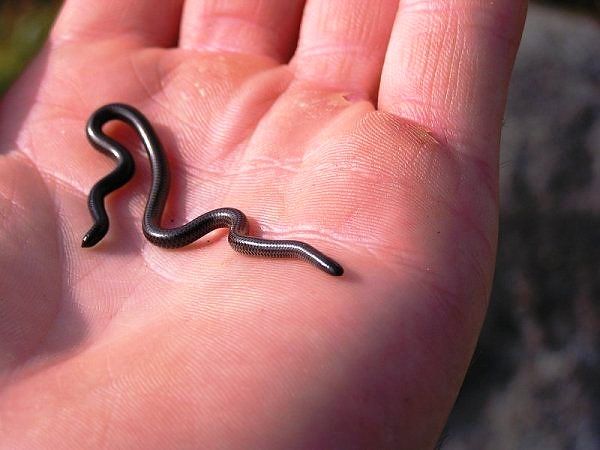 The world’s smallest snake species, which adult’s average size is just beneath four inches in length and 0.11811 inches in diameter, has been discovered on the Caribbean island of Aruba some years ago. Encountering this species which is as thin as a spaghetti noodle and small enough to rest in the palm of your hand, is becoming very frequent by our curator Anthony Croes, who advocates the goals of Etnia Nativa to share and protect our natural richness. Our curator has found this snake variety that lives in tiny cavities in the limestone flats, alongside the South and North-Western part of the island bordering the salt lake that ends or starts in the Malmok area. There we find the top layer of the limestone plateau that has deprived of its original vegetation by heavy equipment for housing projects. Turned over and tumbled rocks exposed the underground part of the limestone showing holes and cavities that form the ideal hunting and living biosphere for the small snake.

Etnia Nativa`s concern is that the Aruban species is new to science and therefore its importance is unacknowledged but is might be vital in Aruba’s ecosystem. Studies based on its genetic most probably differences from other snake species and its unique color pattern and scales. It is also stated that some old museum specimens that had been misidentified by other scientists actually belong to this new species.

Scientists use adults to compare sizes among animals because the sizes of adults do not vary as much as the sizes of juveniles and because juveniles can be harder to find. In addition, scientists seek to measure both males and females of a species to determine its average size. Using these methods could determine if this species could be unique to Aruba. A snake of this same specie was discovered by Blair Hedges, an evolutionary biologist in 2008 on the island of Barbados and the nearby island of St. Lucia. He named the one discovered on Barbados Tetracheilostoma carlae or Leptotyphlops carlae, which is the smallest of the more than 3,100 known snake species on the planet. The smallest animals have young that are proportionately enormous relative to the adults. The hatchlings are one-half the length of an adult, whereas the hatchlings of the largest snakes are only one-tenth the length of an adult. Tiny snakes produce only one massive egg — relative to the size of the mother — which suggests that natural selection is trying to keep the size of hatchlings above a critical limit in order for them to survive

Biologists think the Barbados snake may be at or near the minimum possible size for snakes, though cannot say for sure that no smaller species exists — several other snake species are nearly as small. While it is possible that a smaller species exists, finding such an animal is unlikely. “Snakes may be prevented by natural selection from becoming too small because, below a certain size, there may be nothing for their young to eat.” Like others to which it is related the snake feeds primarily on earth worms and larvae of ants and termites. In contrast to larger species — some of which can lay up to 100 eggs in a single clutch — the smallest snakes and the smallest of other types of animals usually lay only one egg or give birth to one offspring. The Aruban variety is no exception to this pattern. It produces a single slender egg that occupies a significant portion of the mother’s body. “If a tiny snake were to have two offspring, each egg could occupy only half the space that is devoted to reproduction within its body.”

To get to know more about Aruba’s stories of origins, about animals and culture, art and desert gardens, visit our native expert at Etnia nativa. Our renowned cultural encounter session has been entertaining curious participants for decades. Mail us at etnianativa03@gmail.com to confirm your participation. Our facilities and activities take place close to high rise hotels.