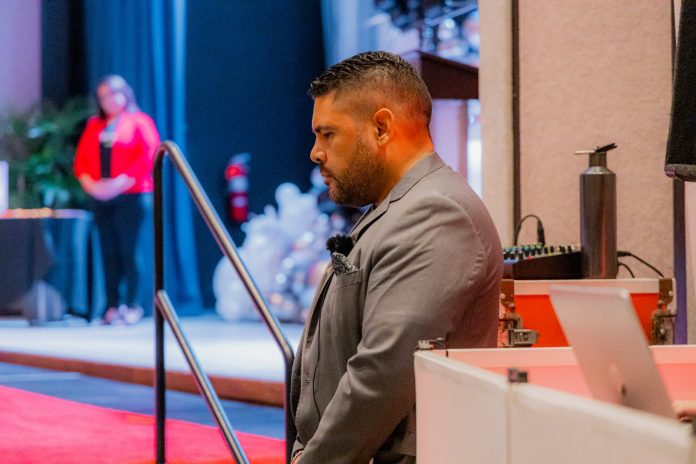 The teacher as well as the student are people, and before everything, must be seen as people. That is the philosophy of Gershwin Lee, headmaster of the MAVO school, Colegio San Antonio.

Lee had just finished supervising a ‘strafmiddag’ – afternoon detention – when he spoke with our reporter. A group of students unhappy that they had to spend a Friday afternoon at school is not exactly and ideal situation, but the headmaster doesn’t let any opportunity go by without connecting with his students. “They feel that the teacher doesn’t like them, they told me. Many times it is a teacher who gave them a low grade.” And what Lee told them was that by getting lower grades, the children reinforce the bad impression that the teacher might have of them, but the negative consequences fall on them.

He knew of which teacher the kids were talking, someone who has an interest but follows a stricter line. When the headmaster asked the kids why they don’t make an effort, the answer was that “I don’t want the teacher to think that I’m a teacher’s pet”. In that moment, Lee gave them a challenge, to ask the teacher directly if he thinks they have a perspective. “I told them that they will be surprised by the answer, because I’m sure that the teacher will say that he does believe in them, as long as they apply themselves.”

After the conversation, Lee let the kids watch the documentary about gymnast Simone Byles, who despite having addicts as parents who couldn’t give attention to their child; she was adopted by her grandparents. “The difference is the mindset. The idea was for the children to realize that trauma doesn’t need to be an obstacle. Everyone has trauma. A child who gets screamed at by a teacher when he was in first grade because he couldn’t read well will be left with trauma. The point is how you deal with trauma.”

Perhaps the most surprising aspect is that Gershwin Lee told the students that he also experienced a challenging youth. His father, the late Atan Lee was an extremely strict parent who didn’t hesitate to use physical discipline and demanded perfection at school from his children. Gershwin as the older of three would rebel. His grades in MAVO were nothing to be proud of, and his rebellion continued until after finishing HBO (Dutch equivalent to college). His father dreamed of his son receiving the title ‘drs’, and Lee got all the way to his thesis and then decided not to do it. He informed his father, who was obviously disappointed, and then moved to Spain where he obtained his Masters in Business Administration with specialization in marketing and public relations.

The trajectory however made Lee realize why his father was so focused on his children’s achievements. “My father grew up poor in a big family. A male child of Chinese heritage, who was a victim of bullying, managed to overcome and wanted the best for his children. He couldn’t believe it himself how much he achieved. No one believed in him when he was a child.”
The realization that his father’s demands were the result of trauma allowed Gershwin to accept that the disciplinarian was simply a father who loved him and wanted the best for him.

And these stories, Lee tells them to the students of Colegio San Antonio. This however does not mean that it’s not necessary to recognize the difficulty that some students are going through, because often, the attitude and arrogance of some students hides the lack of a parent’s love, or the fact that the family is poor. Such attitudes are reflected in the results, and sometimes parents have a hard time understanding this. Gershwin applies the same human approach with the parents, some of whom sometimes come to school very angry.

From the start, ever since he was a teacher, Gershwin noticed that the best way to see the student, the parent, or the colleague is first as a person, holistically. For this reason also it is important for Gershwin to have personal contact with parents, to really get to know them. And he asks all of them the same question: “How was your day yesterday? How are you this morning, what did you have to eat?” This way of showing interest tears down walls and allows him to come closer to people, in order to reach the core of any conflict. A student (who is not a ‘repeat client’) who approaches him because the teacher kicked him out of school will not get scolded, but will be approached by a person who wants to know more about the life of the student. “I see what his fears, doubts and complexes are, if he is afraid.”

The way in which Gershwin Lee deals with people is thus more like a coach than a strict disciplinarian. He doesn’t leave out that there are rules to be followed, but in order to demand adherence, Lee believes it is essential to motivate the student as well as the teacher so that both want to work on improvement.

It might be part of his personality, but Gershwin Lee explains that from early on he realized the importance of a different approach, and he followed all courses and training possible on this area, from Conscious Discipline to yoga, which provide techniques to help anyone breathe in and calm down.

The results can be seen, because Colegio San Antonio already has years on top of the list of schools with a better percentage of graduates. But this is not what motivates the headmaster. “If you take the first exam period from last year, our school was the one with the worst results. There was the possibility for every student to drop their lowest grade (an arrangement due to the pandemic) and still graduate. But I told them to still take the second chance exam and improve their grade.”

The headmaster motivated his students to believe in themselves and assured them that they will graduate. The result of the school in itself was not important for Lee. Rather, his objective was for the students to grow and realize their potential and be happy people, an approach that is proven to work.

Consumers more optimistic in the second quarter of 2021: Results for...