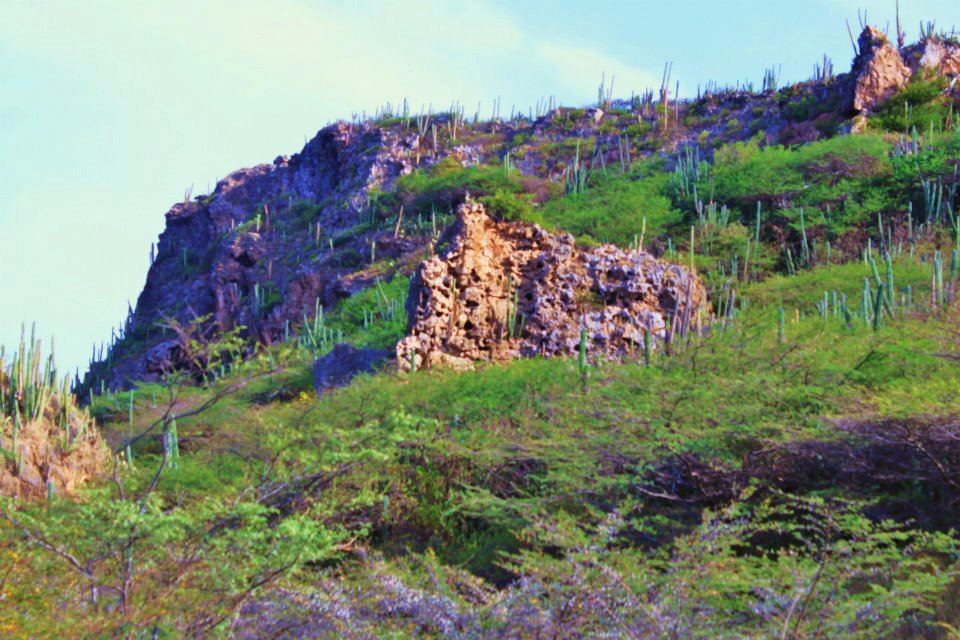 Each week we share the most interesting and revealing articles regarding Aruba, a destination to be explored,we can find,and so doing uncover amazing and informative stories along the way.

The areas consisting of Limestone is what today surrounds the Aruba lava formation and the areas which includes the QD conglomerations. Limestone terraces can be best observed at the north and east coast of the Island. However limestone occurs also inland at Isla, Hudishibana, French Man Pass and Canashito for example. These terraces are mostly areas with little vegetation and soil. The limestone areas inland are an exception because these areas are usually bordered by a QD landscape. The combination of limestone and quartz diorite also result’s in permanent freshwater sources like the one at Fontein and the one east of Malmok. Rainwater is “caught” by limestone and released at the border where the limestone meets the quartz diorite. The most important geological feature of the limestone landscape are the caves. They were formed by dissolution of limestone by groundwater and were exposed due to changes in sea level and upwards tectonic movements of the earth. For obvious reason all pre-ceramic sites except a minor one are situated in the limestone areas. At Canashito a group of five individuals belonging to this group were buried in a “habri” open space of a big limestone outcrop. Most pre-ceramic individuals in the ca. 70-persons-cemetery at Malmok were buried under large pieces of limestone. The ceramic sites found on limestone show no signs of long-term habitations as these areas have no suitable agricultural soils (unless they occur in association with a QD landscape). The hydrological conditions are favorable due to some freshwater sources in these areas. One ceramic burial site, Budui, is found in a limestone cave. It is one of the four historic activities that have been recorded in the other caves. The prehistoric groups used several of the caves for their pictographs. At Fontein, Quadirikiri and Canashito drawings were made inside the limestone caves. At Rooi Thomas and Rincon, the drawings were made in big limestone “habri” open space. No limestone tools have been found in association with prehistoric groups. The softness of the rock is clearly a limiting factor. A variety of limestone called crystalline limestone has been used to make human figurines. Furthermore, all these categories of rocks can also be divided into crystalline rocks (ALF and batholith) which are impermeable, and limestone, which has the natural components of the more recent Landscape.

In the previous chapter, we suggested that originally there were three main categories of rock, the group from the Aruba Lava formation (mainly diabase), the group from the batholith (quartz diorite) and the limestone formation. This is basic for our understanding of the soil that we find today on top of the main geologic formations. This soil consists partly of these rocks and is a product of erosion. By erosion we mean all the processes that loosen up rock and existent soil and carry these downhill into the landscape. Besides sand and clay which are erosion products of rocks, the soil also contains humus. This latter is the decay material of organic matter (remains of dead plants, animals, etc.) So, the soil is the surface accumulation of sand, clay and humus, no crystalline structure, and is permeable. Pic. 4. Mining of Limestone use as gravel has damaged great part of islands landscape for construction activities.

In general, a soil profile is made up of three units or horizons, the topsoil which contains all kind of decay material, the aforementioned, humus. It is characterized by a darker color. The subsoil has little decay material with coarser rock fragments than the topsoil, and the original rock lying under the soil is the parent or bed rock.

The thickness of these horizons depends on age, climate, vegetation and other factors closely related to the easiness of the soil to be transported. The A horizon is the part of the soil where all biological activity takes place. For this reason it is important for the vegetation and/or cultivation possibilities.

According to the local report, and to our own field observations, this “ideal” stratigraphic situation is extremely rare in Aruba at the present time. The top horizons are thin or absent in most places. Of importance is the comparison of the few places where such layers can be distinguished and places where both top soil and most of next stratus is missing. The former are mostly areas with significant vegetation or vegetation bordering it.

We’ll be back next week with another episode. If you’ve liked our stories, book your reservation for a personal Etnia Nativa experience through etnianativa03@gmail.com and take Aruba home with you.