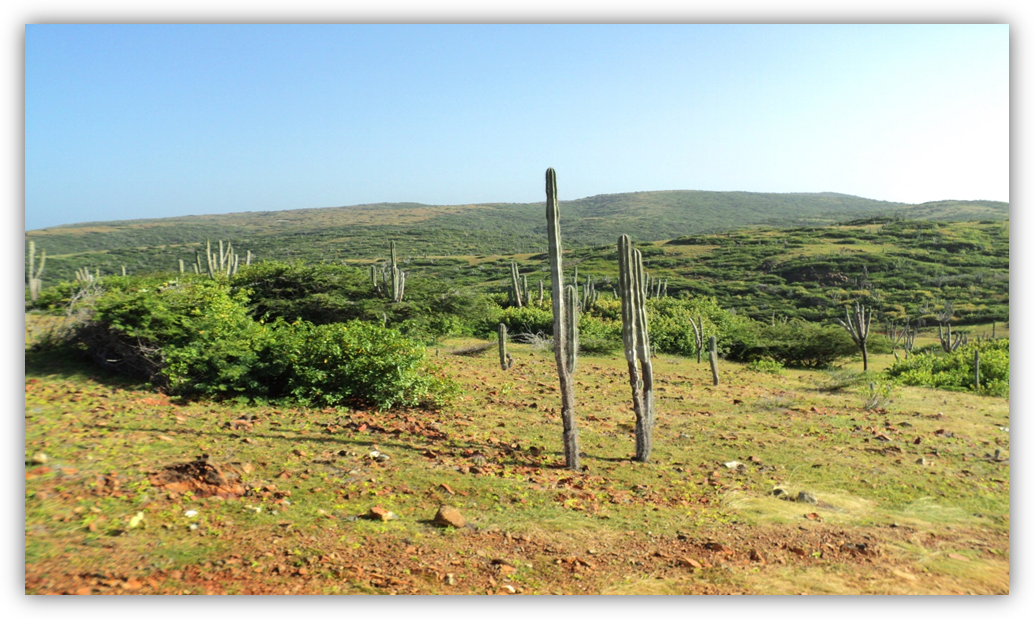 If we must define Aruba`s landscape today. We can differentiate three basic geological formations. One is a hilly part, second by an undulating part and a third part consisting of limestone which embraces these two zones mentioned before and forming also the coast line.

The central hilly part is where you can find the highest hills of the island. The highest point of the island (Jamanota 189 m) and most of the other hills (Arikok 184m) are situated in the central part of the island. This landscape is constituted of the rock unit called the Aruba Lava Formation (ALF). This rock unit has two main components, volcanic rock and metamorphic rock. The hills are made up of the resistant volcanic rocks. The most common of these rocks is diabase, a hard, black rock. The metamorphic rock, schist, is a less hard, green rock with a sheet-like structure. The parts of the ALF landscape which consist of schist are the less resistant.

It is in these parts where water is transported after rainfall, forms guts or rooien. These cut across the valleys of the ALF area. Such guts are not significantly deep and the weathered material which has accumulated around them is limited. Outcrops and small hills of the ALF manifest themselves all along the northern coast of the island. This northern coast is rugged with some small bays cutting through it. The geological processes by which these rocks were created are complicated by the fact that numerous events which took place influenced these processes through the ages.

The ALF landscape seems to have had a specific function for the prehistoric inhabitants. The specific function of this landscape is reflected in the fact that both stone extraction camps can be found on, or close to this landscape. Coashiati is one of these locations, situated north of Jamanota hill and is part of the ALF landscape. Dos Playa; two beaches in Papiamento, is made up of two bays at the northern coast.

The plateau between these two bays is formed partly by the ALF with much debris of this rock unit scattered around. One small Pre-ceramic site found is called Daimari. It is situated on one of the outcrops of the ALF. No ceramic sites are found in the ALF landscape, although several like Daimari and Boca Prins are near outcrops at the northern coast. Also, some pottery has been found in the area of Arikok hill. This landscape was obviously not suitable for long-term habitation. A lack of good agricultural soil may be the reason for this. The hydrological conditions provided permanent freshwater at Fontein, where rainwater is caught by limestone and is released at the boundary of the limestone and a different rock unit. The rocks of the Aruba Lava Formation were extensively used by the inhabitants of the prehistory. The physical characteristic of the rocks played a key role in determining the purpose for which it would be used. Diabase was used to make axes, chisels, knives and the polishers. The hardness and the homogeneous structure of the rock make it the best raw material for these artifacts available on the island. The polishers were collected at the bays on the northern coast and were then further polished by the Amerindians of the mainland to make similar artifacts. The schist was used as material to make pendants and beads; the green color was probably the determining factor. No tools of schist has been found, the sheet-like structure is a limiting factor when making an axe or chisel. The rock will easily split along the sheet-lines. The rock type of similar beads and pendants found in the area_ and described in the literature as greenstone_ is often difficult to establish since the term greenstone covers a wide range of different rock types (schist, rhyolite, jade). dominated by a rock unit which the main component is quartz diorite. The landscape here is flat to slightly undulating with quartz diorite boulders in it. This rock is black and white speckled. It is relatively hard. The typical diorite landscape is found near Santa Cruz. These are all areas with boulders and small or large patches of sand and vegetation. Places with few boulders and large areas of quartz diorite debris are found in the east in Tanki Flip, Noord, Alto Vista and in the south in Savaneta.

We’ll be back next week for a following episode. Now, if you’ve liked our stories, book your reservation for a personal Etnia Nativa experience trough etnianativa03@gmail.com and take Aruba home with you.