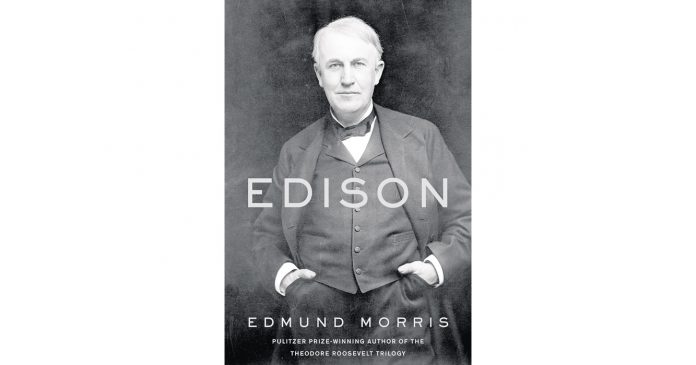 The late Edmund Morris, a Pulitzer Prize-winning biographer known for his willingness to brush aside the norms of his genre if it suited his narrative ends, does it again in his final book: a fresh look at Thomas Alva Edison, perhaps America’s most prolific and consequential inventor.

Morris, who died in May at age 78, opens “Edison” conventionally enough with a prologue highlighting the inventor’s world-changing accomplishments. Starting in his teens as a precocious telegraph operator, the man known as “the Wizard of Menlo Park” invented and patented nearly 1,100 machines, systems and electrical devices until his death in 1931 at the age of 84. Beginning with lower Manhattan in 1882, Edison lit up entire cities using long-burning incandescent lightbulbs and electrical dynamos. He invented the phonograph and a host of other sound devices that brought recorded voices and music into living rooms and cinemas. Besides those signature accomplishments, Edison was responsible for, among many other things, the first universal stock ticker, movie camera, alkaline reversible battery, the first industrial research and development laboratory (at Menlo Park, New Jersey), even the world’s biggest rock crusher, invented while spending years on one of his least successful ventures trying to mine iron ore from a western New Jersey mountain.

He did all this on a lifelong diet consisting mainly of plain milk and a brutal work regimen of 18 hours a day, often at the expense of his personal life with his two wives and six children. Nearly deaf since age 12, Edison found a blessing in the silence as a way to shut out distractions. And while he relished and promoted his worldwide fame, he never cared for labels like “genius” or “wizard.”

“I never had an idea in my life,” he once told a reporter. “I’ve got no imagination. … My so-called inventions already existed in the environment — I took them out. … The industrious one coaxes it from the environment; the drone lets it lie there while he goes off to the baseball game. The ‘genius’ hangs around his laboratory day and night.”

After this introductory section, Morris’ narrative takes a highly unorthodox turn by describing the inventor’s later years in the opening chapters. He then proceeds backward, decade by decade, culminating with Edison’s younger years when many of his most familiar and consequential inventions in electricity and sound replication occurred.

Morris’ willingness to breach the organizational norms of biography may not surprise readers familiar with his even bolder previous work, “Dutch: A Memoir of Ronald Reagan,” in which Morris included himself as a made-up Zelig-like character who “knew” the former president back to his youthful days. He claimed this device gave him a way to share insights he had gained about the hard-to-penetrate former president. But the resulting blend of fact and fiction in such a high- profile biography caused a ruckus among many critics and historians.

Morris never directly addresses why he presents Edison’s life in reverse chronological order. But he drops a possible clue in his endnotes by asserting that previous Edison biographies offered only scant details about his later life. Whatever the reason, Morris’ decision to begin his book with lesser known details about the aging Edison’s inventions and exploits makes for a rousing start. Edison tried during the 1920s to help free America from its dependency on foreign rubber in the early auto age by trying to identify plants capable of producing enough commercially viable rubber that would thrive in American soil (he never did). We also learn about Edison’s many inventions in support of the Allied cause during World War I despite his personal pacificism.

There were episodes, miscalculations and loose-tongued pronouncements, especially late in life, that further humanize Edison’s story. He made a losing bet (at least at the time) on battery-operated cars versus the internal combustion engine as the automobile age dawned. He caused international shock waves by questioning the existence of God or an afterlife. The ultimate empiricist, Edison didn’t hide his contempt for academic scientists whom he considered impractical — “the bungleheaded fraternity,” as he called them.

Morris’ genre-bending biography of Edison is a briskly written, fact-packed work that, like its subject, is also highly illuminating.q

The 10 best movies released since theaters were shuttered