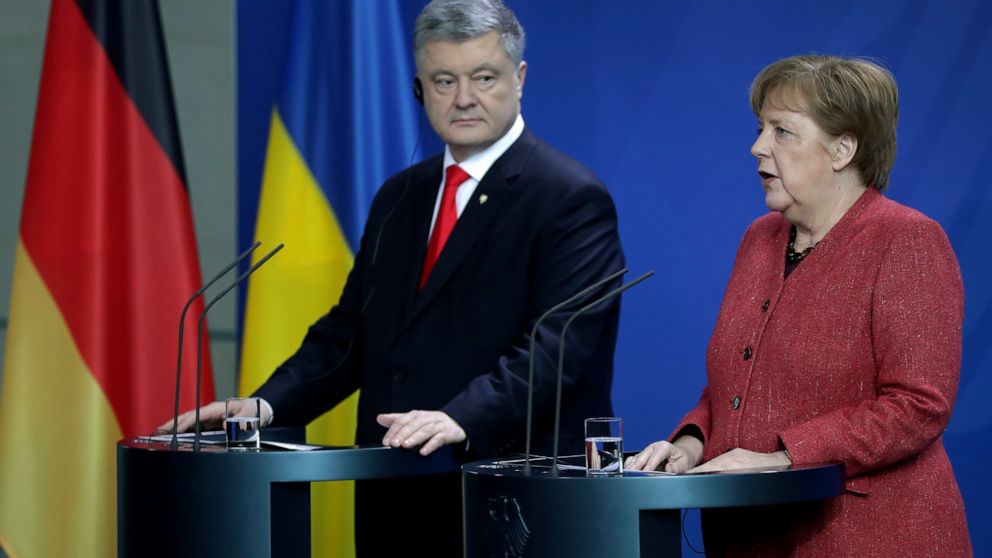 Ukraine’s beleaguered president traveled to Germany and France on Friday ahead of a presidential runoff in which he is trailing a comic actor who is a political novice. His rival headed to Paris only.

Polls show Ukrainian President Petro Poroshenko behind by a wide margin ahead of the April 21 runoff against Volodymyr Zelenskiy. Germany and France, which have led diplomatic efforts for years trying to ease tensions between warring neighbors Ukraine and Russia, are following the election closely.

Macron successively met with Zelenskiy and Porochenko at the Elysee presidential palace in Paris.

“We had a very constructive conversation,” Zelenskiy was quoted as saying by Russia’s state news agency as saying after the talks. “It was a pleasure to meet Mr. Macron.”

He would not elaborate.

After his meeting with the French president, Poroshenko later tweeted that he was “happy to meet with a sincere friend of Ukraine.”

In Berlin, Merkel received only Poroshenko. Her spokesman, Steffen Seibert, said a meeting with Zelenskiy “is not planned at present.”

At a joint news conference in the German capital, Merkel deflected a question about the impression that she favors Poroshenko, arguing that she is in “permanent contact” with the incumbent and it’s important to keep talking on those topics despite Ukraine’s election.

“We have built very close relations in the last few years,” Merkel said, adding that “implementing democratic change is a complicated process … Ukraine has made progress here, but certainly is not at the end of the road.”

Germany and France brokered a 2015 peace accord with Kiev and Moscow to stop the fighting in eastern Ukraine between government forces and Russia-backed separatists, but the deal is far from fully implemented.

“We must continue on this path, because it is the only one I can see on which we can really make progress,” Merkel said, adding that she favors continuing four-way talks between Ukraine, Russia, Germany and France.

“There have been successes in some areas, but a great deal of work remains to be done on many things, so Germany will continue — independently of the outcome of the election — to support the positive and good development of Ukraine,” Merkel said.

Poroshenko said he would be prepared to hold a summit “immediately after the election.”

Zelenskiy, for his part, said his top priority would be holding talks with Russia on ending the fighting in eastern Ukraine.

Poroshenko has campaigned on promises to lead Ukraine on a path to join the European Union and NATO. On his initiative, the country’s parliament added that commitment to the constitution earlier this year.

The president has cast himself as a seasoned statesman capable of standing up to Russian pressure and sought to denigrate his rival as a rookie who would become easy prey for the Kremlin.

Zelenskiy, who has never held a political office, has argued instead that his lack of political experience is an advantage because he has no ties to Ukraine’s corruption-ridden political elite. He has also pledged to keep the country on track to join the EU and promised to call a referendum on whether Ukraine should become a NATO member.q

Far-right seen gaining but not winning in 2 German states