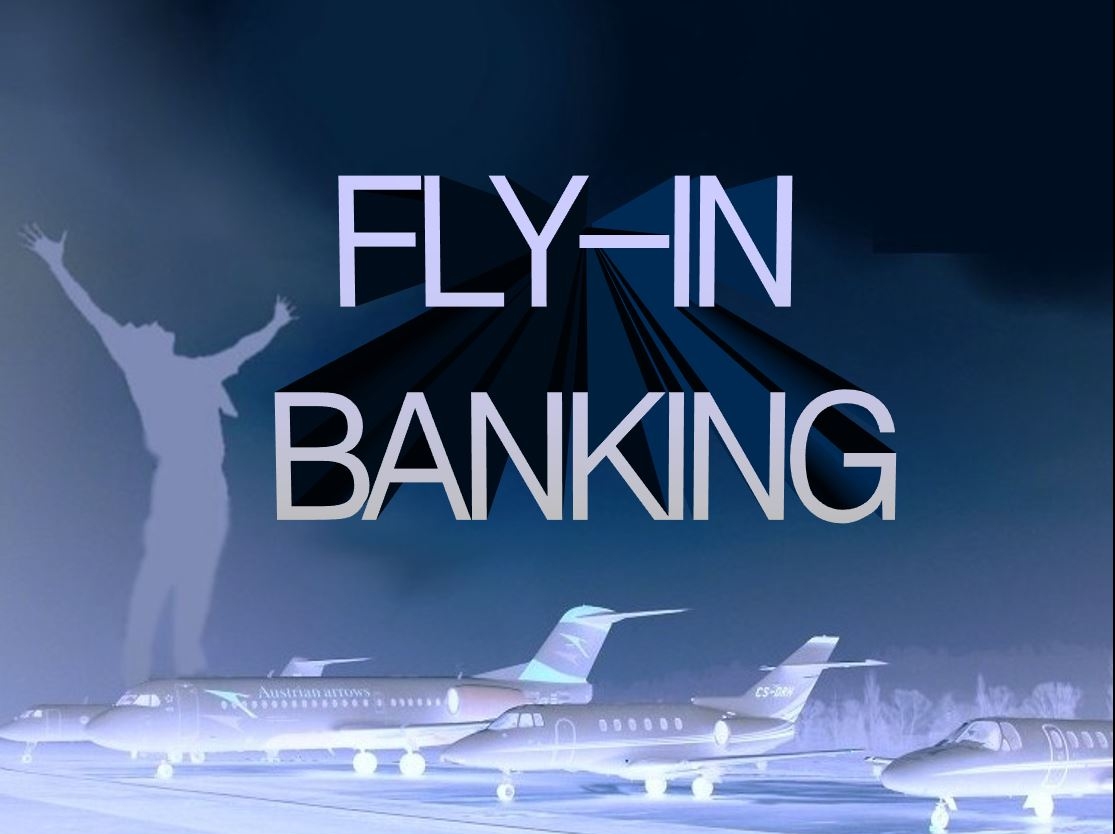 How about Fly-In Banking; like a drive-in fast food operation? No, it’s no joke. In the Caribbean? Probably not, but that is not the point. One has to look at the principles of the concept and explore if one could do a ‘fly-in’ something that might fit a particular destination in a region. Bottom line, it’s all about economic development of a region. Follow-me!

Developing airport business requires some creative thinking especially when it comes to private and business aviation. No one is flying to an airport because of the airport. Passengers are coming for the destination and in the Caribbean for instance especially for the ‘Tourism Product’. How do you get aircraft passengers to come and do business; ‘Tourism d’Affaires’, as the French say? Just visiting conferences for creating awareness and networking is not enough of a marketing effort. At least it was not enough for me. I was in charge of business aviation development. My line of thinking was more about a sustainable development.

I observed that a well-known foreign business man would frequently arrive at ‘my’ airport on his private jet and met with a financial expert for a good hour in the airport’s restaurant and then boarded his jet and left again. Hmm? Could one turn that in some kind of concept? The airport was located in a country well-known for international banking and finance. The idea was born: fly-in finance services. Why not? A service-concept enabling foreign persons and companies to have quick access to financial services by flying to an airport and using the services of the financial institutions on the airport premises or in nearby branches. Fly-In Banking would be a marketing innovation, in airport business development and promotion, but also in the Private and Investment banking industry.

I did some research. In the sixties, in Rio Vista, Texas, there was the ‘Cow Pasture Bank’. The banker owned a grass airstrip behind the bank building. He created a unique financial institution by offering a fly-in feature. Clients would fly their planes in from their farms to do their banking. Mind that in Texas distances are far; the farms are so big that the farmers would also have a grass strip and their own small private airplane. The banker commented that in addition: “We financed a lot of airplanes. It was an easy way to let people fly in and we would look at the airplane and that sort of thing and decide if we wanted to finance it.”

Of course, ‘my’ airport didn’t have a bank. The closest branches of major international brand banks were 15 minutes away. Yet, we had a building where we could rent out space and make meeting rooms available to advisors from the financial institutions, who could come to meet their clients on our premises. My vision was, that if we were successful, we could even initiate a cluster development with additional facilities and offices of service providers from financial industry segments. Good for airport expansion and good for the local community.

So instead of chasing aircraft owners and operators, as one might have expected me to do, I went after bankers. On a local level, the concept was well received. Why wasn’t it realized? The headquarters of the banks that were located in the two cities with a major international airport, didn’t want to lose any business to their branches. Does the word ‘commission’ ring a bell? They believed that the branches could attract the cross-border road traffic, but the HQ’s wanted to keep the flying jetset for themselves.

By accident, it went in international aviation magazine as: “fly-in banking to attract more well-heeled travelers” and “just trying to make things as easy and comfortable as possible for them,” and

“facilitating meetings with representatives from major banks in the airport’s new business center and arranging limousine transportation to nearby branch offices”. The journalist who published the information may have been just a bit too excited about the new service, by publishing it prematurely before the program was actually realized. Bad PR? No. Because in the same article he also mentioned that: “Business aviation movements at the airport during the first half of this year are up by 94 percent over the same period last year, because more executive travelers have discovered…, etc.”

Why write this column about something that failed? It didn’t fail, it just didn’t work due to an unforeseen circumstance. Now, one could come up with a series of quotations of some of the most famous successful people saying that progress is based on trial and failure. The essence of such quotes is that one has to come up with new ideas and eventually one of them will succeed. If one doesn’t try anything new or different, then nothing happens.

Question is, where should it all start? My concept started as an initiative of an airport business developer. Should the idea have come up in a bank? A government economic development authority, maybe? What about a Chamber of Commerce or a Tourism Office? I’m in favor of brain storming meetings with competent participants from various organizations and including some independent open-minded intellectual individuals. When does that happen here in the region and where? And if it was done, where are the tangible results? No results? Maybe change the participants or just make them try harder. What may help is gathering the persons in a room, give them food and water, lock the door and don’t open it anymore until there is a result. Cruel thought? No way, you just couldn’t see the amused grin on my face.

This is about progress for a territory and helping its community. When it comes to tourism product or business development, or even the economic development of a whole region, fresh and especially unique concepts are needed. Concepts that outdo the competition. Think about Fly-In-Something and where that may applicable, or about something else that is original.

More than 80 employees were honored by the Divi Resort