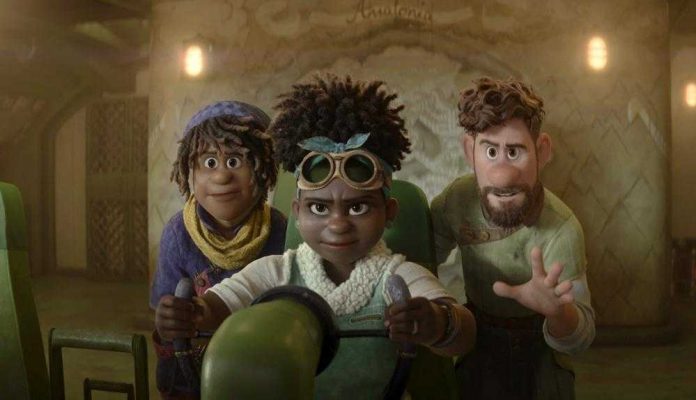 (AP) – Thanksgiving often serves up a feast of new family movies at the box office, but the Walt Disney Co.’s animated offering “ Strange World ” fizzled with audiences out of the gates. The production, which carried a reported $180 million budget, grossed just $18.6 million in ticket sales in its first five days and $11.9 million over the weekend in North American theaters, according to studio estimates Sunday.

The top spot for the holiday corridor, which runs from Wednesday through Sunday, instead went to another Disney movie, Marvel’s “Black Panther: Wakanda Forever,” which raked in an additional $64 million over the last five days, $45.9 million of which was from the weekend. The superhero sequel has reigned over the charts for three weekends now and has grossed $675.6 million worldwide.

It was a muted weekend despite a buffet of well-reviewed options, including the Korean War aviation drama “ Devotion,” the nationwide expansion of the Timothée Chalamet cannibal romance “ Bones and All ” and Steven Spielberg’s “The Fabelmans.”

“Glass Onion: A Knives Out Mystery” also opened in 600 theaters nationwide for a weeklong limited run. It marks the first time a Netflix film has played in the nation’s major theater chains, including AMC, Regal and Cinemark, but neither Netflix nor the exhibitors provided sales estimates for the film, which won’t hit the streaming service until Dec. 23. The first “Knives Out,” which was released by Lionsgate, opened to $41.4 million over Thanksgiving weekend in 2019.

“This was not pre-destined to be a blockbuster Thanksgiving weekend,” said Paul Dergarabedian, Comscore’s senior media analyst. He noted that the marketplace is still being impacted by the pandemic’s effects on Hollywood production and release schedules.

Disney has historically “owned” the Thanksgiving weekend. Walt Disney Studios and Pixar animated titles account for the top six Thanksgiving openings of all time, including films such as “Frozen,” which made $93.6 million in 2013, “Ralph Breaks the Internet,” which pulled in $84.8 million in 2018 and “Moana,” which earned $82.1 million when it opened in 2016. But it’s also been a difficult two years at the company, which last week stunned the industry when it announced that Bob Iger was returning to the company as CEO, replacing his handpicked successor Bob Chapek

“Strange World” opened in 4,714 locations on Wednesday, but it was clear from early preview showings that it was going to be slow going. On Friday, it earned only $5.2 million. “Wakanda Forever,” by contrast, made $18.2 million on Friday in 4,258 theaters and has been out for three weeks.

The animated adventure film’s debut is one of the bigger bombs in the modern history of the Disney Animation studio, similar to the $16 million 2002 Thanksgiving opening of “Treasure Planet.” “Strange World” was directed by Don Hall and Qui Nguyen and follows a family of explorers and features the voices of Jake Gyllenhaal, Dennis Quaid, Gabrielle Union and Lucy Liu. Reviews have been mostly positive, with a 73% Rotten Tomatoes score.

A lack of new family oriented films over the past several weeks may have resulted in “muted” awareness for “Strange World,” according to Dergarabedian.

Third place went to “Devotion,” directed by JD Dillard and starring Jonathan Majors and Glenn Powel, which made $9 million in its first five days and $6 million over the weekend from 3,405 locations. The film was made by Black Label Media and distributed by Columbia Pictures in 3,405 locations. The war epic is based on the true story of Jesse Brown, the first Black aviator in the history of the U.S. Navy, who along with his friend Tom Hudner were pivotal in turning the tide in one of the most brutal battles of the Korean War.

“ The Menu,” the satirical fine-dining thriller starring Ralph Feinnes and Anya Taylor-Joy, landed in fourth in its second weekend, with $7.4 million over the past five days and $5.2 million over the weekend. Fifth place went to “Black Adam.”

In sixth place for the weekend was Spielberg’s “The Fabelmans,” which is based on the filmmaker’s own family and teenage years. The Universal release expanded to 638 theaters, where it earned $3.1 million over five days and $2.2 million over the weekend.

United Artists Releasing rolled “Bones and All” out to 2,727 theaters, where it made an estimated $3.6 million over the five-day opening, with $2.2 million of that coming from the weekend. According to exit polls, some 74% of the audience was between the ages of 18 and 34. The R-rated film from Luca Guadagnino stars Chalamet and Taylor Russell as young cannibals on a road trip through the American Midwest.

In more limited releases, Elegance Bratton’s “The Inspection ” expanded to 32 screens and earned $103,033 over five days.

Overall ticket sales are expected to net out around $125 million. That would be down about 12% from last year, which boasted releases such as “Encanto,” which opened to $40.6 million even with a spiking COVID-19 variant. For movie theater owners, it places even more pressure on “Avatar: The Way of Water,” to deliver a big windfall to close out the year. It launches on Dec. 16.

“Usually Thanksgiving weekend is all about kids and families going to the theater. This year, it’s a heavy mix of films aimed at adults and that’s not a recipe for a box office feast in theaters,” Dergarabedian said. “But it’ll come back in a big way when Avatar opens.”

Morning shows extend the day to cope with viewer erosion