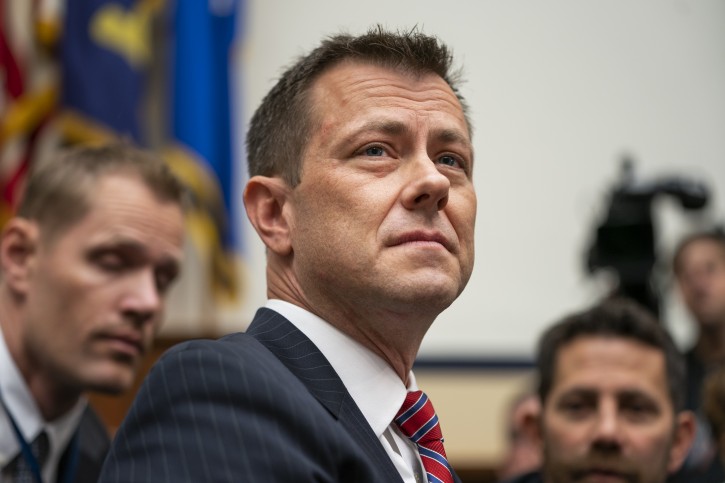 WASHINGTON (AP) — Peter Strzok, a longtime FBI agent who was removed from the Russia investigation over anti-Trump text messages, has been fired by the agency, his lawyer said Monday. The FBI had been reviewing Strzok’s employment after the politically charged text messages were discovered last year. President Donald Trump’s allies have seized on the texts, saying they show the investigation into possible coordination between the Trump campaign and Russia is tainted by political bias.

Strzok was fired late Friday by FBI Deputy Director David Bowdich, said his lawyer, Aitan Goelman. He said the 21-year veteran of the FBI was removed because of political pressure and “to punish Special Agent Strzok for political speech protected by the First Amendment.”
Goelman also said the FBI had overruled the agency’s Office of Professional Responsibility, or OPR, which he said had determined that a 60-day suspension and demotion from supervisory duties was “the appropriate punishment.”

In a statement, the FBI said Strzok was subject to the standard FBI review and disciplinary process and defended the decision to overrule the OPR. “The Deputy Director, as the senior career FBI official, has the delegated authority to review and modify any disciplinary findings and/or penalty as deemed necessary in the best interest of the FBI,” the statement said.
Strzok, who exchanged text messages with FBI lawyer Lisa Page, vigorously defended himself at a combative House hearing in July that spanned 10 hours.

Strzok repeatedly insisted the texts, including ones in which he called Trump a “disaster,” did not reflect political bias and had not infected his work. Texts between the two included their observations of the 2016 election and criticism of Trump. They used words like “idiot,” ”loathsome,” ”menace” and “disaster” to describe him. In one text four days before the election, Page told Strzok that the “American presidential election, and thus, the state of the world, actually hangs in the balance.” In another text, Page wrote Strzok in August 2016: “(Trump’s) not ever going to become president, right? Right?!”

Strzok responded: “No. No he won’t. We’ll stop it.” Strzok worked on the early stages of the Russia investigation in 2016 and worked on the special counsel’s team for a few months after Robert Mueller was appointed in May 2017. Strzok was also a lead investigator on the probe into Democrat Hillary Clinton’s email sever in 2016. An internal Justice Department report issued in June blamed Strzok and Page for creating an appearance of impropriety through their texts but found the outcome of the Clinton investigation was not marred by bias. Clinton was cleared in the probe.

Republicans were livid during the July hearing, which several times devolved into a partisan shouting match. Democrats accused Republicans of trying to divert attention from Mueller’s investigation and Trump’s ties to Russia by focusing on Strzok. Trump, who has repeatedly taken aim at Strzok, said in a tweet Monday that Strzok is one of many “bad players” in the FBI and the Justice Department. “It is a total Hoax,” Trump said of the Russia investigation. “No Collusion, No Obstruction – I just fight back!” There is no indication that the probe will be dropped.

The president also tweeted that the Clinton investigation “was a total fraud on the American public and should be properly redone!” House Republicans cheered Strzok’s firing, with House Majority Leader Kevin McCarthy saying on Twitter that it was “long overdue.” North Carolina Republican Rep. Mark Meadows, one of the leading critics of the FBI investigations, said Strzok was fired “because of what his own written words plainly showed: he was willing to use his official FBI position to try and stop President Trump from getting elected.

He tarnished the FBI’s sterling reputation and severely damaged public trust in an institution where trust is paramount.” Meanwhile, the chairman of the House Judiciary Committee was lambasted by his own son on Twitter Monday for “ruining” Strzok’s career. Bobby Goodlatte, the son of Rep. Bob Goodlatte, R-Va., wrote, “That committee hearing was a low point for Congress” and called Strzok a “patriot.” The younger Goodlatte also began soliciting campaign donations Sunday for the Democrat who is running to replace his father, who is retiring.

Navy to name ship after Marine battles in Fallujah, Iraq