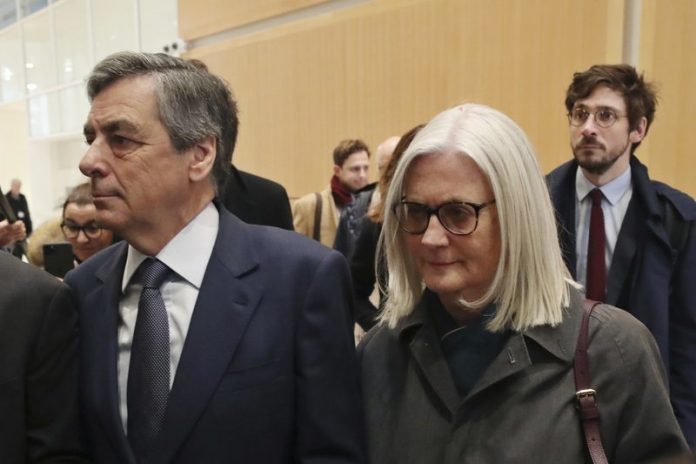 For over three decades, Penelope Fillon was known as the very discreet wife of a prominent politician who became France’s prime minister. She is now at center stage of a fraud trial in Paris for well-paid, public-funded jobs as an aide to her husband that she allegedly did not perform.

The Fillons have denied wrongdoing.

The trial ending Wednesday is set to determine whether Penelope Fillon’s activities were in the traditional role of an elected official’s partner — or involved actual paid work.

The scandal, revealed by the French press just three months before the country’s 2017 presidential election, cost ex-Prime Minister Francois Fillon his reputation. Once the front-runner, Fillon sunk to third place in the presidential race won by Emmanuel Macron.

The long-standing practice of French politicians hiring family members for well-paid public jobs while other French workers were struggling created a backlash of public anger against France’s political elite.

The verdict will be rendered on June 29.

Her aide work brought the family more than 1 million euros ($1.08 million) since 1998. Her previous jobs were subject to the statute of limitations.

British-born Penelope Fillon, 64, told the court how she came to France to study literature, met Fillon and got married in 1980.

When he was first elected as a French lawmaker in 1981, she decided to support his career at a local level in the small town Sable-sur-Sarthe, in rural western France. That’s when she started helping him, no matter whether she was being paid for the job or not, she said.

Over the years, she was offered different types of contracts as a parliamentary assistant, depending on her husband’s political career.

Speaking with a barely audible voice, she often remained vague and hesitant in her answers.

She detailed her mission as mostly writing reports about local issues, opening the mail, meeting with residents, writing press reviews and help to prepare speeches for local events. She said working that way allowed her to have a flexible schedule and raise their five children in the Fillons’ countryside manor.

Prosecutors said her wages — up to nine times France’s minimum salary — appeared to depend on the available financing from the National Assembly rather than the nature of her work.

“I believe my husband decided the amount based on the financing he had at his disposal,” she said.

Prosecutor Aurelien Letocart pointed at the lack of actual evidence of her work, including the absence of declarations for any paid vacations or maternity leaves.

Penelope Fillon acknowledged difficulties in exactly estimating her working hours and said her husband was the one who decided the length of her contracts and other details like bonuses she got.

When she was first interviewed by investigators, Penelope Fillon forgot to mention her first jobs with her husband in the 1980s.

“I believe that in this room, most people would remember well their first professional experience,” the president of the court noted.

The Fillons tried to use “all casual tasks and gestures of everyday life to magnify the reality,” Letocart argued. “Meeting with voters, getting the children from school, going shopping or reading mail is not intended to be paid work.”

In contrast to his wife, Francois Fillon, 65, appeared confident and determined in court and insisted his wife’s job was real. He noted he was first elected at 27 — then the youngest lawmaker at the National Assembly.

“We both immersed in a way of life that is a little like the priesthood, 7 days a week, 365 days a year,” he said.

Francois Fillon insisted that, according to the separation of powers, the justice system cannot interfere with how a lawmaker organizes work at his office.

“I am the one deciding the aides’ wages,” Fillon said. “I am not accountable to anyone.”

In addition, charges also cover a contract that allowed Penelope Fillon to earn 135.000 euros in 2012-2013 as a consultant for a literary magazine owned by a friend of her husband — also an alleged fake job. The magazine owner, Marc de Lacharriere, already pleaded guilty and was given a suspended eight-month prison sentence and fined 375,000 euros in 2018.

Fillon served as prime minister under president Nicolas Sarkozy from 2007 to 2012. He was also a minister under two previous presidents, Francois Mitterrand and Jacques Chirac.

He left French politics in 2017 and now works for an asset management company.

In Latin America, face masks become a form of expression