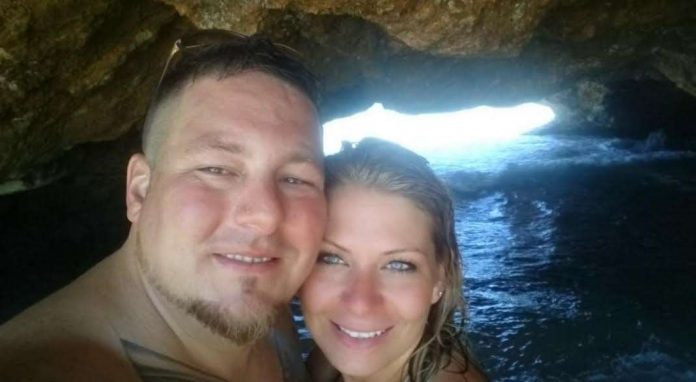 James Taylor and his fiancé Laura Smith from Toronto, Canada frequent the island a minimum of three times per year and have become very close with people that live on the island over the past seven years of travelling to Aruba. They have so many stories to share from the island and would like to tell you about some of their experiences on ‘Dushi Aruba’.

James: “One day Laura and I were swimming at Baby Beach and when we were out into the ocean I noticed a giant turtle swimming around us and close to Laura. You know we we’re having a swim and we had a great lunch and a few drinks so Laura wasn’t taking it too seriously when I said there was a turtle beside her.” She thought James was just joking but then when they got out of the ocean and walked to their chairs to sit down with their radio and have a cold beverage the turtle climbed up on to the shore right in front of them and began to dig a hole. “Once the turtle was up onto the shore Laura started to feel bad for her as the turtles eyes were crying and Laura wanted to pour water on her eyes but we didn’t and the authorities showed up shortly after because the locals called them and we’re all saying that it’s a very rare occasion to see what we witnessed.”

Laura and James have been from one side of the island to the other numerous times and always rent a Jeep so they can stop and visit their friends that live there at their houses and move along the island at their own leisure. “We participated in the party bus, Jolly Pirates, ATV rentals, you name it we’ve done it and we love supporting any tourist attraction that is on the island as we know it helps make the world go round. Last time we were down we actually looked at a couple properties to purchase while we were there but we are waiting for our Canadian currency to come a little closer to par with the American currency.” He remembers one time they were in the natural pool and there was an ATV tour where the tour guide had lost his key. The entire tour was trying to help him find the key and Laura and James had stayed back late. “We were the only people in the natural pool and when we got out the gentleman asked us if we had seen his key. I said that we hadn’t and in return I asked him to take a picture of us and believe it or not my sandal was standing on top of his key when he took the picture. When I look down it was under my foot.”

Their favorite places to eat on the island would be the LG Smith Steakhouse above the Renaissance Mall and Salt and Peppers in the high-rise area and also the Italian Restaurant out on the tip near the lighthouse, James says. “The night we went on the tour bus I had to get up on the bar and be the cowboy from the village people singing YMCA. Over the seven years of us travelling to the island I have brought probably over 30 different friends to Aruba.”

They have also rented Harley’s and even went on the massive bike ride for the Camacuri Bike day. “We also love Baby Beach and eat at the restaurant there where we have made good friends with the employees over the years who we speak to on Facebook all the time.”

James: “Aruba is our home away from home and we have been all over the world as far as north Iceland, Europe and so on. We have never felt so welcome and safe at any other place we have been and are very proud to be a part of your happy island.”