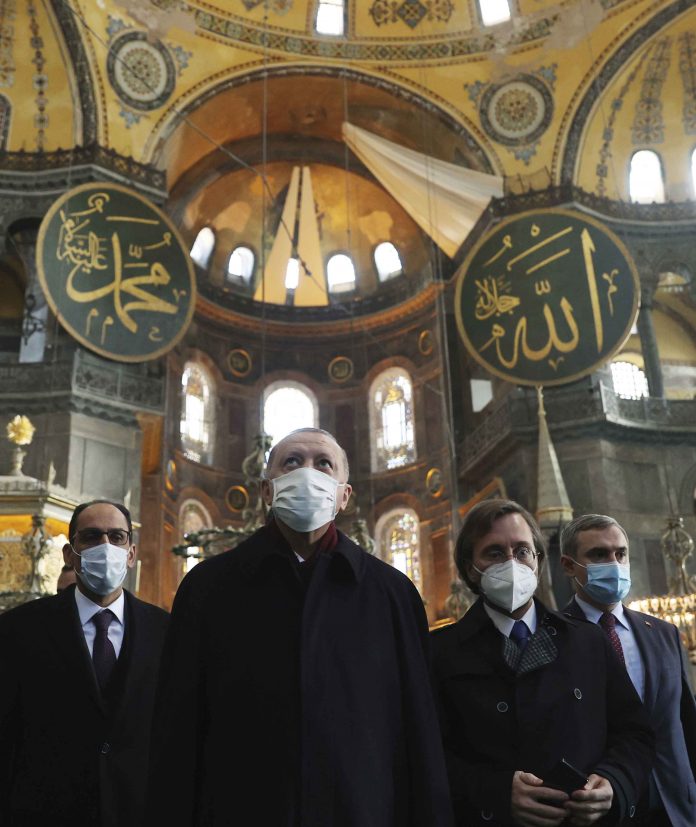 Turkey’s president has renewed his vitriolic attacks on French President Emmanuel Macron, saying he hopes France will get rid of him soon.

Speaking after Friday prayers in Istanbul, Recep Tayyip Erdogan called Macron “trouble” for France, which he said was experiencing a dangerous time under his leadership.

“My wish is for France to get rid of the Macron trouble as soon as possible,” Erdogan said. Otherwise, Erdogan claimed, France would not be able to overcome the Yellow Vest protest movement against social injustice in the country.

Erdogan also said France has lost its credibility as an intermediary of the Minsk group, which was created in the 1990s to encourage peaceful resolution for the conflict in Nagorno-Karabakh. France has sided with Armenia in that conflict, and Turkey with Azerbaijan.

Erdogan’s comments come amid harsh rhetoric from both leaders.

Macron tried to avoid further escalation Friday, calling for “respect” after Erdogan’s attack, and deflecting a question on the spat. The French leader also told Brut, a news website, that Erdogan was in the process of limiting the liberty of the Turkish people.

Relations have been tense over a host of issues, including what Erdogan characterizes as French Islamopohobia, energy disputes in the Eastern Mediterranean and Libya.

In October, Erdogan said Macron needed his head examined for defending caricatures of the Prophet Muhammad.

At the time, French authorities denounced Turkish “propaganda” against France and Paris recalled its ambassador to Turkey for consultations.

The French presidency responded to Erdogan’s comments in October with unusually strong language, saying: “Excess and rudeness are not a method” and “we are not accepting insults,” and called for changes in Erdogan’s “dangerous” policy.

Group: We warned Germany of Russia threats to slain Georgian