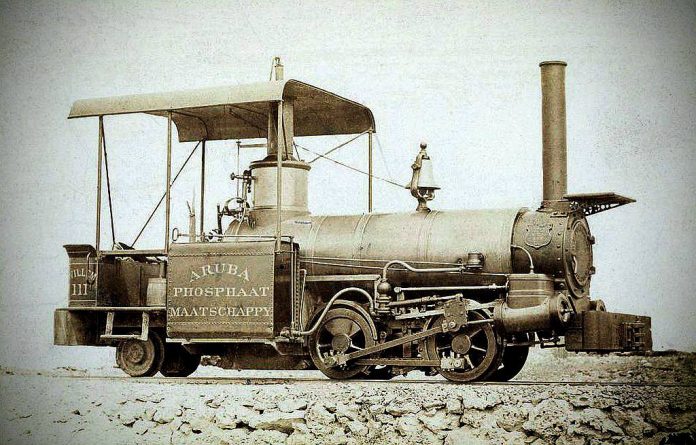 The Phosphate Industry of Aruba:

It was so that the Aruban phosphate mines yielded a sum total of over 9.000.000 guilders, a very considerable result seeing that the original capital amounted to only 112,000 guilders. About 4.000.000 guilders in export-duties were obtained by the government from Aruba during the period.

When World War I broke out in 1914, the exploitation of phosphate became very difficult. It was impossible to get dynamite and the means of exportation became worse as a result of the war in Europe Three- to five hundred tons of phosphate per day could be handled by the pier. In 1882, about 250 men worked in the phosphate industry and the salaries were not bad. At first mining was restricted to Cero Colorado and Cero Culebra. After some fifteen years the surface supplies on the hills had been exhausted. Borings were made in the south-east part of the island, and at a depth of from fifteen to eighteen meters deep phosphate layers were discovered from which the phosphate won during the next fifteen years was obtained.

In those years Aruba virtually bore the taxes of the whole colony, for the colony so far had needed a subsidy. In 1873 thanks to exploration on Klein Curacao, there had been a surplus, but after 1880, when the phosphate layers on Aruba began to be mined, the colony could do without subsidies for twelve years consecutively, from 1882 to 1895. Phosphate mining continued the most important source of income for the colony till the establishment of the oil-industry, Aruba being the main contributor. Our island was the milk-cow of the colony. One entrance to the mine

The procedure adopted in winning the phosphate was relatively simple. The mineral occurred in thick layers, sometimes to a depth of about twenty feet, resting on the original rock-bases of the hills and partly covered by younger limestone. The color of the phosphate varies from yellow to a reddish brown or liverish hue; it is hard, but crisp.

Mining was started on the surface, in open quarries. To this end about three feet deep holes were drilled by means of hand-drills, after which the phosphate was made loose with dynamite. As the workers reached further down, they came under the hollow rock and soon worked under an overhanging roof. A few pillars were left standing to support this. These phosphate pillars were later taken away when the layer had been exhausted and it did not matter anymore whether the roof caved in here and there. This stealing of the pillars was a hazardous job and had to be done very carefully. At the same time as the work in the quarries went on, mining was also started at a deeper level by constructing a shaft and galleries leading from it. In this manner a real mine was made, with corridors and high vaults where the phosphate had been removed.

But in the course of the years, phosphate exploitation became less profitable: as the phosphate had to be extracted from deeper underground, the quality became poorer.

It was a very levelly industry. The Aruba Phosphaat Maatschappij which was the company`s name in Dutch, had to put into circulation their own currency on our rural island. Money had always been scarce here. The laborers who earned their living elsewhere used to send their wages in gold to Aruba.

Before the coming of the Phosphaat Maatschappij there virtually was no Sint Nicolaas; the few fishermen’s cabins assembled there could not yet pretend to the name of village. But now this little assemblage soon began to expand. The Cero Colorado Lighthouse was constructed during this period. The only real houses at St. Nicolaas, however, were those built for the Company. Local labor was initially only found with difficulty: that was because of the rival branch of industry, the exploitation of gold. That’s why forty men were attracted from Bonaire and about twenty bricklayers and carpenters from Curaçao. The workers stayed near the phosphate mines all week and slept in barracks. Even a group of Italians was attracted to the island to manage the company; four of them never left the island: Antonio and Victorio Petrocci, Eugenio Falconi and Cajetano Jacopucci. They settled at Tanki Leendert.

Men of the engine For the transport of the phosphate to the harbor, a six kilometer long narrow gauge railway was built and the phosphate was taken to the loading berth in trains of about twenty tip carts and a steam locomotive. There it was loaded into sail ships that took it to countries like England, France, Germany and the United States to be processed to super phosphate that was used as fertilizer.

To get to know more about Aruba and its origins, its animals and culture, we highly recommend you to book your visit for our renowned cultural encounter session has been entertaining curious participants for decades. Mail us at etnianativa03@gmail.com to confirm your participation. Our facilities and activities take place close to high rise hotels. Q