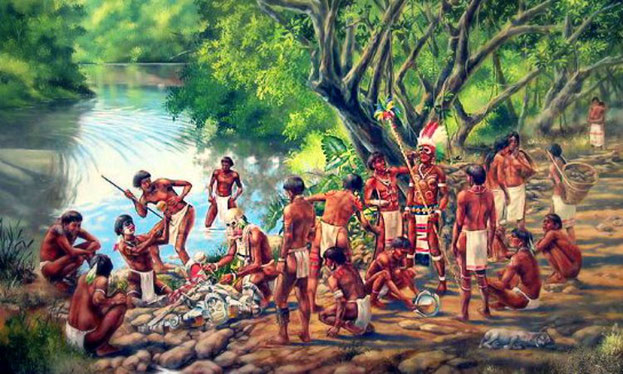 Coming from the South to the beloved rock,

Approximately 3000 to 2500 years ago agro-potters from the Amazon-Orinoco river basins started their journey spreading in a constant Northwestern direction.  They did this mainly over land. Great obstacles had to be overcome during their journey. The enigma is what triggered this new wave of migration on land, while other groups chose the rivers to reach to the Atlantic Ocean. In time they perfected their vessels into sea worthy canoes, capable to traveling alongside the coastline and the open sea, reaching the isles of Caribbean Sea. These Amerindians were from a totally different ethnic group if compared to the Paleo natives we mentioned before. These tropical rain forest farmers were different in many other physical and culture aspects. Arawakan speaking people who in a thousand years or more colonized the northern and coastal areas of South America, including almost all the islands of the Caribbean Sea. However it is most probably that the ancient and well -cured Paleo cousins, who populated the land before, behind the Cordillera de Merida and the Segovia Highlands in Venezuela, which together with the Cordillera de Perija in Colombia, formed an enclosed highland area. This land stretched around a big lake, following along the coast line and reaching the ocean and the isthmus of Paraguaná .

,played their part in their cultural development of the new comers, since they knew exactly how to survive in this part of land. This Cordillera or mountainous ridge represented at one time a natural barrier, separating the area of Lake Maracaibo and where the earth stretched east, reaching the Caribbean Sea. This land of forest and palms, abundant in game was soon to be transformed in to an area where slash-and-burn or tropical forest agricultural techniques were introduced and practiced. This method of clearing the land for agricultural purposes is associated with the cultivation of mainly tubers such as yucca, yams, sweet potatoes and probably some Musa varieties, like Bananas and plantains were common. There was many plants that could be grinded in to flour for the elaboration of their main staples such as arepas, cachapas and allacas, etc.

A more organized form of agriculture developed with the acquiring of the seeds of life or better known as the American corn, a totally new crop that was developed in Mexico that changed the world. This Indian corn or Zea Maize soon became the transformer of cultures, where simple and the ordinary use of clay is transformed into the development of sophisticated ceramic artifacts of high artistic mastery of the ceramic techniques. Ceremonial ornaments where created in gratitude to the spirits of life and fertility.  The Paleo hunters were those who knew the land, knew the use of the flora, fauna and what was available as raw materials, essential and elemental for a their rapid adaptation. Pic. 2. The bringing of the holy cross to Sta. Cruz.

These people were the descendant of South American tropical-forest farmers. They became the heirs of the land and later the legendary Caquetio tribe. The people who received the Spaniards on arrival when the R.C. cross was brought from the main land.  At that time, an organized society had established itself responding to the main chief who lived on the mainland. History mentioned his frequent visits on this part of his territory of influence.

Like hunters and gatherers, had socio-cultural units consisting mainly of kin-based populations which were structured along the lines of age and sex, without much in the way of economic, political, or religious grounds for social status differentiation. Social controls were largely based on kinship rights and obligations of a moral nature, except in cases of certain military activities that were often under the temporary leadership of special chiefs. Their richer technology and production of agricultural surpluses enabled villages to remain in the same place for many years. They were supported by a more adequate and dependable food supply, which included maize (corn), beans, squash, manioc, and tropical vegetables and fruits, as well as the riches of the mangroves forests and the Caribbean Sea.

Caquetío, also spelled Caiquetio, or Caiquetia, Indians of northwestern South America were living along the shores of Lake Maracaibo at the time of the Spanish conquest. They conquered the islands Bonaire, Curacao and Aruba.q

If you like our stories we recommend you to follow us by booking your Etnia Nativa experience and take it home with you.