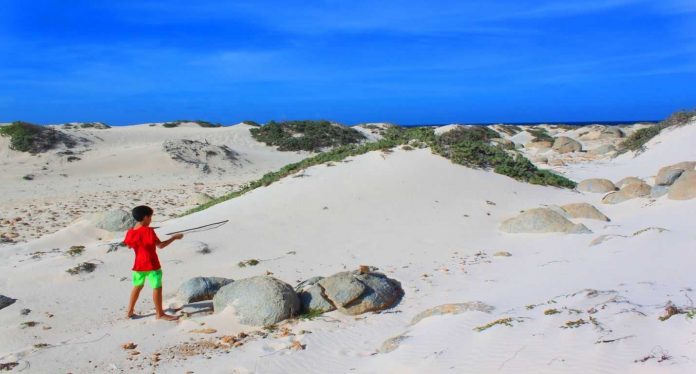 Aruba has a few areas that have some beautiful dunes. Most of these areas are protected by law which prohibits motor vehicles to ride on them, like those at California, behind the Lighthouse. We should thank our parrot fishes for their contribution, because they bite on the coral for food and spit out the crusher calcium sand, which on its turn eventually will be picked up by the wind and accumulates all behind the beaches forming these clear white dunes.

The word “dune” came into English from French around 1790, which in turn came from the word dūne and today “duinen” in Dutch. A dune is a landform, a large mass of wind-blown sand. Dunes are common in deserted environments and near beaches.

Some coastal areas have one or more sets of dunes running parallel to the shoreline directly inland from the beach. The dunes are important in protecting the land against potential ravages by storm waves from the sea. Although the most widely distributed dunes are those associated with coastal regions, the largest complexes of dunes are found inland in dry regions and associated with ancient lake or sea beds.

As a dune forms, plant succession occurs. The conditions on an embryo dune are harsh, with salt spray from the sea carried on strong winds. The dune is well drained and often dry, and composed of calcium carbonate from seashells. Rotting seaweed, brought in by storm waves adds nutrients to allow pioneer species to colonize the dune. In Aruba some of these pioneer species is the “tabaco di piscado” Sesuvium portulacastrum and “cocorobano” “Tournefortia gnaphalodes” in our native language Papiamento and also knows with the name “sea lavender” These plants are well adapted to the harsh conditions of the dunes.

The dunes have a flora specially adapted to the aridity of the soil, the mobility of the loose sandy substrate, the low nutrients and the salinity. Few species survive in these extreme conditions, but these habitats should not be underestimated for this reason.

As we move away from the sea, the intensity of the wind, the saline spray and the mobility of the substrate are reduced. This makes the environmental conditions less extreme, which is used by a greater number of species.

The plant communities in the dunes are considered halophytes, that is, with vegetation that lives in soils with a high content of soluble salts. … The predominant fauna of the coastal dunes are insects such as bees, wasps and ants, beetles, flies spiders, sea birds and also lizards.

To get to know more regarding Aruba and its origins, its animals, culture etc., we highly recommend you to book your participation. Living our cultural encounter session is mind opening and entertaining curious hearts for decades. Mail us at etnianativa03@gmail.com. Our facilities and activities take place close to your place.