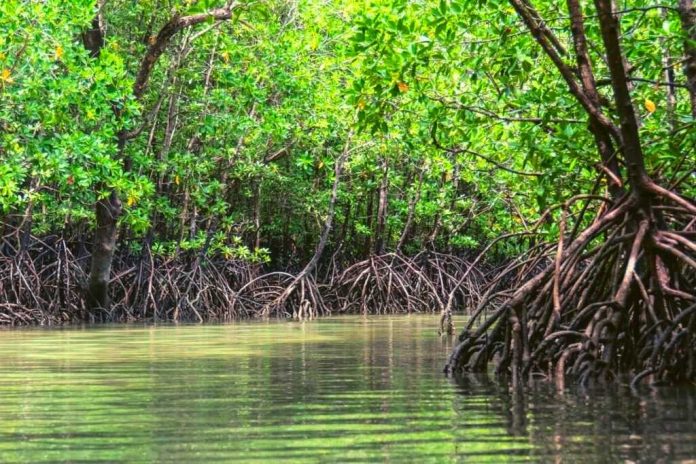 Mangroves form transition vegetation from land to sea which offers great protection to tropical islands and continental shorelines, estuaries and lagoons of tropical latitudes areas, trees and shrubs that can grow below the maximum level of tides and are very tolerant to high salinity of sea water. Mangrove forests forms a separate and unique echo system on its own right.

Mangroves protect both the saltwater and the freshwater ecosystems they straddle. The mangroves’ complex root systems filter nitrates and phosphates that rivers and streams carry to the sea. They also keep seawater from encroaching on inland waterways.

They act as a protective barrier between water and land, preventing coastal erosion and reducing the effect of waves and swells, especially during extreme weather events, being a powerful shield against storms, hurricanes and tsunamis.

According to experts, mangroves capture and store 34 million tons of carbon globally. A great contribution to the fight against climate change and global heat!

They promote biodiversity as they serve as a habitat in its entirety. Many types of fish, crabs, shrimp and mollusks inhabit its roots; birds also find a favorable habitat in the mangroves. They also provide spawning grounds for fish and crustaceans on nearby coral reefs and offer them shelter during the early stages of life.

Mangrove forests provide many of the resources upon which coastal people depend for their survival and livelihood. At low tide, people can walk across the tidal flats to collect clams, shellfish, and shrimp. At high tide, fish move in to feed among the protection of mangrove roots, turning the marshy land into rich fishing grounds. The mangrove trees themselves provide fuel, medicines, tannins, and wood for building houses and boats.

Recent studies have shown that mangroves can be used for biotechnology. And due to its tolerance to salinity, the possibility of transferring genes taken from mangrove species to certain foods, such as rice, has been studied to develop new varieties of crops, generating new opportunities for coastal farmers.

However we must also know keep in mind that mangroves are very susceptible to drastic change, delicate because they require an environment in balance to survive. This means that they require an appropriate concentration of fresh and salt water to thrive.

The rise in sea level as a consequence of climate change causes a saline imbalance in the mangrove habitat that makes their survival difficult in addition to pollution caused by man and the overexploitation of resources. All this endangers these species, which are among the most diverse and productive in the world offering so many benefits that they undoubtedly deserve governmental commitment and our protection.

Fishermen of Southern Thailand Trang Province have a saying that goes like this “If there are no mangrove forests, the sea will have no meaning. It is like having a tree with no roots, for the mangroves are the roots of the sea.”—