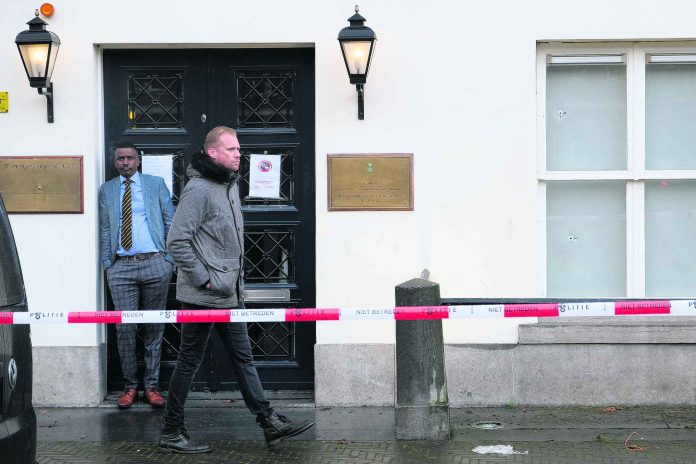 The Saudi Arabian embassy in The Hague was sprayed with gunfire early Thursday, leaving bullet holes across the facade and in several windows. Police said nobody was injured and a man was arrested on suspicion of involvement in the shooting.

Spokesman Steven van Santen said police were alerted around 6 a.m. to shots being fired at the building on a stately avenue opposite a canal in the Dutch city.

Officers found several bullet casings outside the building and launched an investigation including an appeal for witnesses.

Later Thursday, police said they had arrested a 40-year-old man from the nearby town of Zoetermeer on suspicion of involvement in the shooting. The identity of the suspect, who was being held for questioning, was not released in line with Dutch privacy rules.

The official Saudi Press Agency said that the embassy had witnessed “a cowardly shooting incident.”

As soon as authorities learned of the incident from embassy officials, they cordoned off the area, closed the road leading to the embassy, bolstered security measures and “took criminal evidence,” the statement added.

The embassy condemned the attack and praised Dutch authorities for their prompt response, saying it “looks forward to investigating the circumstances, knowing the results and bringing those behind the incident to justice.” Saudi Arabia also urged its citizens in the Netherlands to exercise caution.

The Dutch foreign ministry said in a statement that it was taking the shooting “extremely seriously” and was in close contact with Saudi authorities.

The shooting came a day after an explosion at a Saudi cemetery where American and European officials were commemorating the end of World War I wounded three people. There was no indication that the shooting in The Hague was linked to the blast.