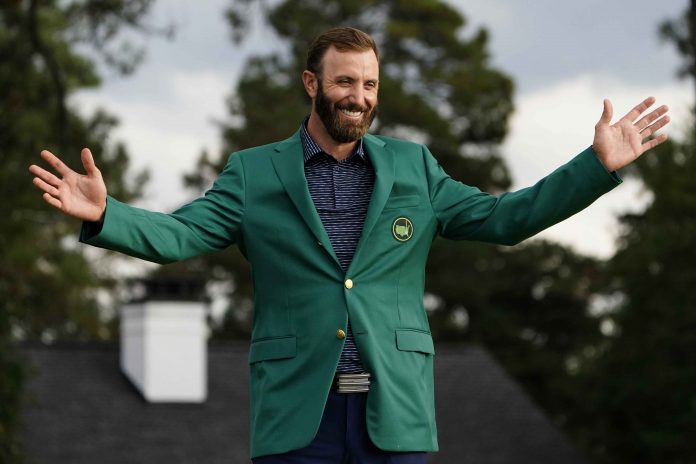 Breaking the scoring record was on his mind, because, of course it was. Dustin Johnson wanted it, too. He just hadn’t bothered to look the number up.

“It was 19 (under) before?” Johnson asked a Masters official to his right in the interview room late Sunday afternoon. They had on identical green jackets.

Told it was 18 under (shared by Tiger Woods and Jordan Spieth), Johnson flashed a shy grin. His expression rarely gives much away; his answers seem designed to deflect attention. A moment later, Johnson admitted that he hadn’t looked at a scoreboard all day, either.

Not after shaky back-to-back bogeys at Nos. 4 and 5 peeled his four-shot lead back to one; nor after three straight birdies on the back nine left Cameron Smith and Sungjae Im, Johnson’s last two pursuers, in the dust. He didn’t see the need to complicate things.

“I didn’t want it to affect the way I played,” Johnson said. “I just didn’t look at it. I took what the course gave me and hit the shots I felt I could hit.”

Coming down 18, though, he finally gave in. Johnson turned to his brother Austin, who conveniently doubles as his caddie, and asked where he stood.

“I told him he had a five-shot lead,” Austin recalled. “I could kick it in from there. He had no clue.”

Johnson’s distaste for drama is often mistaken for indifference. He came out on tour in 2007 looking to all the world like he was born to play golf — long arms, a slow heartbeat and a syrupy swing that belies its raw power — then won early and, with the exception of the majors, often.

Johnson completed the climb to No. 1 in the world the first time in 2017 and stayed there for the better part of the three years since. He’d won twice already this year and still held that lofty spot when he arrived at Augusta, having already spent nearly two weeks in quarantine after testing positive for the coronavirus to boot. If anyone had a storyline that ran straight through this strange, pandemic-disrupted season, it was Johnson.

Yet nobody was happier when the pre-tournament spotlight focused on Tiger Woods’ chances of reprising his improbable 2019 win, and bulked-up Bryson DeChambeau’s grand plan to carve up Augusta National the way he sliced and diced Winged Foot at the U.S. Open. Predictably perhaps, both were old news by the time Johnson stretched out to a four-shot lead heading into the final round.

That move brought Johnson’s haunting past at the majors back to the fore. In his lone triumph, the 2016 U.S. Open, he came from four shots behind on the final day to win. On four other occasions, Johnson had at least a share of the lead after 54 holes and failed to cash in. Though you wouldn’t have known by watching him play — at least after those early bogeys — the suspense was taking its toll on him, too.

“I proved to myself that I do have it, ” Johnson began, “because I’m sure a lot of y’all think …” and then paused. “Like, when am I going to have the lead and finish off the golf tournament or finish off a major?”

Johnson saved the real surprise, as it turned out, for afterward. In a post-match interview for CBS, Amanda Balionis tried several times to get Johnson to explain what finally slipping on the green jacket meant. Every time he tried to answer, Johnson choked up, fighting back tears.

“I’m sorry,” he said apologizing more than once. “It’s hard to talk. I’ve never this much trouble gathering myself.”

Not on a golf course, perhaps, because inside the ropes, Johnson knew where he was headed. But at age 36, he again faced the question of whether all that talent would be enough when it mattered most, and finally answered it by proving how much it mattered to him.

NBA’s ties with China, worth billions, now under strain