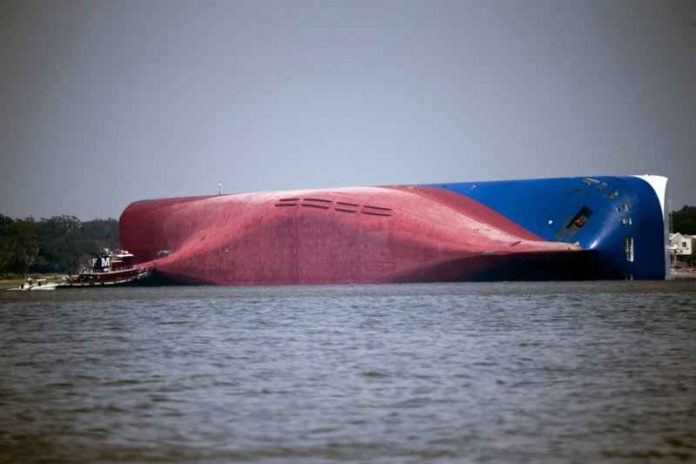 Using a heavy anchor chain like a saw, a towering crane Friday began cutting apart a cargo ship that’s been stranded on the Georgia coast since it overturned nearly 14 months ago.

Demolition of the South Korean ship Golden Ray finally started after months of planning and setbacks. Officials warned that removing the partially submerged shipwreck off St. Simons Island will be loud and messy. It’s expected to take roughly new months to complete.

“We expect there will be noise, fires, product discharges, and debris once we begin the cutting and lifting process,” John Maddox of the Georgia Department of Natural Resources said in a statement from the multiagency command overseeing the ship’s removal. “It would be unrealistic to say that this operation will be clean and perfect.”

The Golden Ray capsized Sept. 8, 2019, shortly after leaving the Port of Brunswick about 70 miles (200 kilometers) south of Savannah. More than 4,200 vehicles remain in the ship’s cargo decks.

The salvage team plans to cut the ship into eight massive chunks. Each segment will be hoisted by a crane and then lowered onto a barge for transport to a salvage yard on the Gulf Coast.

The cutting and lifting are being handled by a giant floating crane called the VB 10,000, which resembles a giant archway of steel girders anchored to a pair of barges. It’s the largest such crane sailing under a U.S. flag, capable of lifting loads of up to 7,500 tons (6,800 metric tonnes).

While straddling the shipwreck, the crane is using chains measuring 400 feet (122 meters) long to cut through the vessel. The salvage team expects each cut will take a full day, with perhaps a week needed to cut, lift and remove each giant segment.

“Frankly, it’s very slow,” said Coast Guard Petty Officer 2nd Class Michael Himes, a spokesman for the command team. “The chain itself is moving about 7 to 8 feet (2.1 to 2.4 meters) per minute.”

Himes said noise had been minimal because the chain was cutting below the water level, working its way upward.

Crews erected a mesh barrier around the Golden Ray to contain any leaking pollutants and falling debris — including cars that were among its cargo — during the cutting. That will be cleaned up once the rest of the dismantled ship gets removed.

The ship’s demolition was delayed by a busy Atlantic hurricane season, a handful of coronavirus infections among members of the salvage team and an engineering problem dealing with how to anchor the crane.

The command has booked an entire resort nearby through Jan. 21 to isolate 100 salvage workers as a safeguard against the virus.

The Coast Guard held hearings on the cause of the shipwreck last month. An expert concluded the Golden Ray tipped over because unstable loading had left its center of gravity too high. Coast Guard Lt. Ian Oviatt said the ship lacked enough water in its ballast tanks, used to add weight at the bottom of a vessel, to offset that of the vehicles in its cargo decks above.