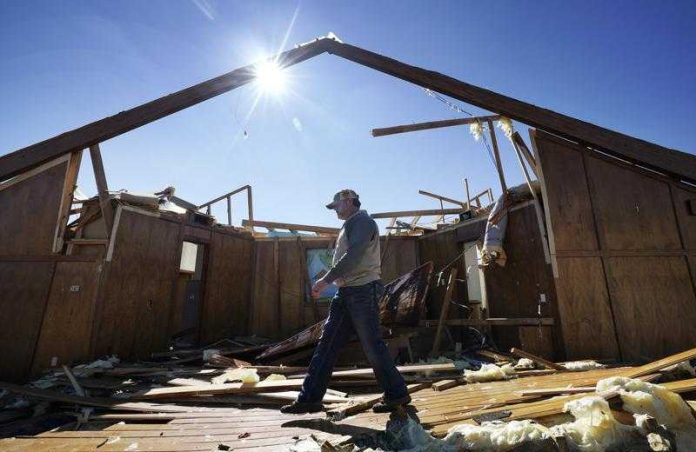 IDABEL, Okla. (AP) — Residents in southeastern Oklahoma and northeastern Texas began assessing weather damage Saturday, working to recover and thankful to have survived after a storm stretching from Dallas to northwest Arkansas spawned tornadoes and produced flash flooding, killing at least two people, injuring others and leaving homes and buildings in ruins.

Oklahoma Gov. Kevin Stitt went to the town of Idabel to see the damage. He said on social media that all the homes had been searched and a 90-year-old man was killed. Keli Cain, spokesperson for the state’s Department of Emergency Management, said the man’s body was found at his home in the Pickens area of McCurtain County, about 36 miles (58 kilometers) north of Idabel.

Morris County, Texas, Judge Doug Reeder said in a social media post that one person died as a result of a tornado in the far northeastern Texas County, offering no other details.

Reeder and other county officials did not immediately return phone calls for additional comment.

The Oklahoma Highway Patrol also reported a 6-year-old girl drowned and a 43-year-old man was missing after their vehicle was swept by water off a bridge near Stilwell, about 135 miles (217 kilometers) north of Idabel. The drowning has not been officially attributed to the storm and will be investigated by the medical examiner, Cain said.

Saturday afternoon Stitt declared a state of emergency for McCurtain County, where Idabel is located, and neighboring Bryan, Choctaw and LeFlore counties.

The declaration is a step in qualifying for federal assistance and funding and clears the way for state agencies to make disaster-recovery related purchases without limits on bidding requirements.

Texas Gov. Greg Abbott said damage assessments and recovery efforts are under way in northeast Texas and encouraged residents to report damage to the Texas Division of Emergency Management.

“I have deployed all available resources to help respond and recover,” Abbott said in a statement. ”I thank all of our hardworking state and local emergency management personnel for their swift response.”

Idabel, a rural town of about 7,000 at the foothills of the Ouachita Mountains, saw extensive damage, Cain said. “There are well over 100 homes and businesses damaged from minor damage to totally destroyed,” Cain said.

Trinity Baptist Church in Idabel was preparing to complete a new building when the storm ripped apart their sanctuary and flattened the shell of the new structure next door, according to Pastor Don Myer.

The 250-member congregation was to vote after the Sunday service on whether to move ahead with he final work to complete the building, Myer told The Associated Press.

“But we didn’t get to that. Every vote counts and we had one vote trump us all,” Myer, 67, said. “We were right on the verge of that. That’s how close we were.”

Myer said the congregation is going to pray on what happened, see how much their insurance covers and work to rebuild. On Saturday morning, a few members of the church took an American flag that had been blown over in the storm and stood it upright amid the wreckage of the original church building.

Shelbie Villalpando, 27, of Powderly, Texas, said she was eating dinner with her family Friday when tornado sirens prompted them to congregate first in their rented home’s hallways, then with her children, aged 5, 10 and 14, in the bathtub.

“Within two minutes of getting them in the bathtub, we had to lay over the kids because everything started going crazy,” Villalpando said.

“I’ve never been so terrified,” she said. “I could hear glass breaking and things shattering around, but whenever I got out of the bathroom, my heart and my stomach sank because I have kids and it could have been much worse. … What if our bathroom had caved in just like everything else? We wouldn’t be here.”

Terimaine Davis and his son were huddled in the bathtub until just before the tornado barreled through Friday, reducing their home in Powderly to a roofless, sagging heap.

“We left like five minutes before the tornado actually hit,” Davis, 33, told The Associated Press. “Me and my son were in the house in the tub and that was about the only thing left standing.”

In their driveway Saturday morning, a child’s car seat leaned against a dented, grey Chevrolet sedan with several windows blown out. Around back, his wife, Lori Davis, handed Terimaine a basket of toiletries from inside the wreckage of their house.

The couple and the three kids who live with them did not have renter’s insurance, Lori Davis said, and none of their furniture survived. “We’re going to have to start from scratch,” she said.

They hope to stay with family until they can find a place to live.

Judge Brandon Bell, the highest elected official in Lamar County where Powderly is located, declared a disaster in that area. Bell’s declaration said at least two dozen people were injured across the county.

Powderly is about 45 miles (72 kilometers) west of Idabel and about 120 miles (193 kilometers) northeast of Dallas and both are near the Texas-Oklahoma border.

The National Weather Service in Fort Worth confirmed three tornadoes – in Lamar, Henderson and Hopkins counties – Friday night as a line of storms dropped rain and sporadic hail on the Dallas-Fort Worth area and continued to push eastward.

The weather service’s office in Shreveport, Louisiana, said it was assessing the damage in Oklahoma.

Weather service meteorologist Bianca Garcia in Fort Worth said while peak severe weather season typically is in the spring, tornados occasionally develop in October, November, December and even January.

“It’s not very common,” Garcia said, “but it does happen across our region.”