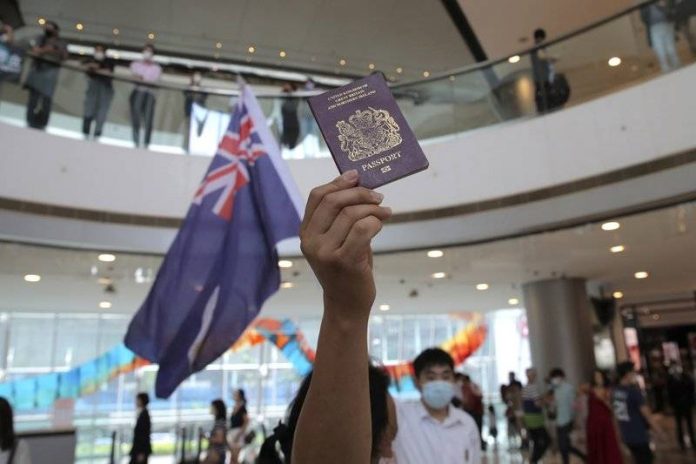 China’s ambassador to the United Kingdom lashed out at what he saw as one-sided reporting on human rights issues Thursday, presenting a series of videos defending Chinese actions against Uighur Muslims in the northwest Xinjang province and warning Britain to stop meddling in his country’s affairs.

Ambassador Liu Xiaoming’s presentation stressed that China’s actions in Xinjiang were meant to fight terrorism, and the grainy images he played for reporters included bloody scenes showing the aftermath of attacks.

The videos were meant to counter a recent BBC interview in which presenter Andrew Marr had challenged the diplomat to explain drone footage that apparently showed Uighur prisoners being guarded and transferred to trains by Chinese authorities.

Liu denied Uighurs were being mistreated and posted screen grabs that challenged, among other things, whether the prisoners were kneeling or sitting on the ground. He described “so-called victims” of human rights violations as being either separatists or “actors trained by anti-China forces in the U.S. and other Western countries.”

“There are so many fallacies and lies that permeate Western media,” he said. “It can be called the lies of the century.”

The rising tensions come as U.S. President Donald Trump and his administration push Washington and Beijing toward a new era of ever-growing confrontation.

The U.S. government last week imposed trade sanctions on 11 companies it says are implicated in human rights abuses. The sanctions upped U.S. pressure on Beijing over Xinjiang, where the ruling Communist Party is accused of mass detentions, forced labor, forced birth control and other abuses against Muslim minorities.

Liu added that disputes over human rights, the imposition of a new security law in Hong Kong and Britain’s decision to ban Chinese tech giant Huawei from taking part in building a new high speed phone network had “seriously poisoned the atmosphere” of China’s relations with Britain.”

“China and U.K. should have enough wisdom and capability to manage and deal with these differences, rather than allowing anti-China forces and Cold War warriors to kidnap (the) China-U.K. relationship,” he said.

The United States has lobbied its allies to shun Huawei, because it says the Chinese government could use the company’s technology to spy on Western nations. Huawei denies the allegations and argues that U.S. protectionism is behind the move.

Britain in recent weeks also suspended an extradition treaty with Hong Kong and offered refuge for millions of eligible Hong Kongers who feel threatened by Beijing’s tightening grip on the semi-autonomous city. Liu reiterated his previous comment that Britain should stop meddling in Hong Kong.

Liu hammered the point that the U.K. and its people needed to think independently of the hawkish signals coming from the Trump administration. He said Britain was at a “critical historical juncture” in how it wanted to treat China.

“It’s our hope that the U.K. would resist the pressure and coercion from a certain country and provide an open, fair, transparent and non-discriminatory environment for Chinese investment so as to bring back the confidence of Chinese businesses in the U.K,” he said.

Earlier this month, U.S. Secretary of State Mike Pompeo visited London and applauded British Prime Minister Boris Johnson for the decision to bar Huawei from 5G and other responses to the challenges raised by China. Pompeo said the U.S. supports “those sovereign choices, we think, ‘Well done.'”

In another sign of fraying relations, U.K. Foreign Secretary Dominic Raab condemned the Hong Kong government’s decision to disqualify 12 pro-democracy nominees from a September legislative election. Authorities said they failed to uphold the city’s mini-constitution and pledge allegiance to Hong Kong and Beijing.

“It is clear they have been disqualified because of their political views, undermining the integrity of ‘one country, two systems’ and the rights and freedoms guaranteed in the joint declaration and Hong Kong’s basic law,” Raab said.

Israel’s Netanyahu rails at media over protests against him

Is Brazil the next big hot spot as other nations ease...

Housing market chills, layoffs, US cos. dial up virus fight