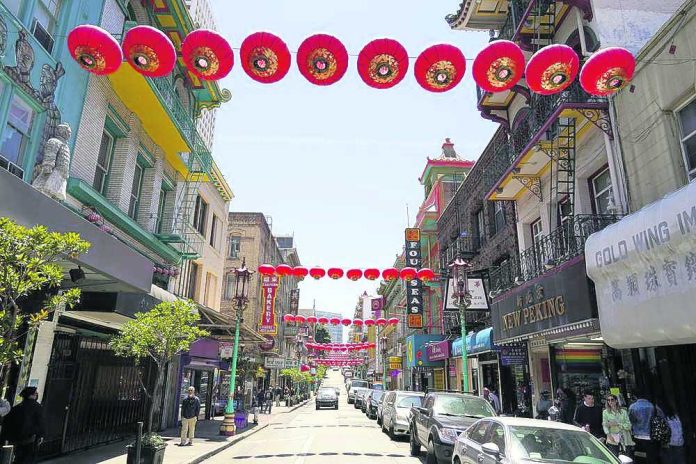 (AP) – The last week of April was a whirlwind for San Francisco’s Chinatown. The storied neighborhood debuted the “AAPI Community Heroes Mural,” a mostly black and white depiction of 12 mostly unsung Asian American and Pacific Islander figures on the wall of a bank. Three days later “Neon Was Never Brighter,” the first ever Chinatown contemporary arts festival, took over the streets throughout the night. Traditional lion and dragon dances, a couture fashion show and other public “art activations” were featured in the block party-like event.

Cultural and arts organizations in Chinatowns across North America have worked for decades on bringing greater appreciation and visibility to these communities. But they faced an unprecedented one-two punch when the pandemic caused shutdowns and racist anti-Asian attacks increased — and continue. As painful as those events are, they also indelibly influenced the reemergence of various Chinatowns as close-knit hubs of vibrancy and culture.

Cynthia Choi, co-founder of the Stop AAPI Hate reporting center, is still “blown away” to be one of the heroes painted in the San Francisco mural. But being at the festival was equally touching for her.

“I got really emotional because it’s been so long since I’d seen so many people come out to Chinatown, especially at night. I had heard so many of my friends or family saying, ’I don’t want to go to Chinatown,” she said. “I knew it was going to be fun and exciting, but I was really moved.”

There has been renewed attention from cities, companies and younger Asian Americans from outside these historic Chinatowns. Wells Fargo partnered with the Chinatown Media & Arts Collaborative on the “heroes” mural. Everyone wanted to “really address anti-Asian hate and to uplift Asian American voices,” said Jenny Leung, executive director of the Chinese Culture Center of San Francisco, which is part of the Collaborative. Youths voted on who to put on the mural.

“Frequently the way that Chinatown looks is imported as a tourist kind of attraction and fantasy for visitors to see,” Leung said. “It’s never really about celebrating the community’s perspective and voice.”

The idea for the “Neon” festival was briefly discussed pre-pandemic. But the events of the last two years lent urgency to it.

“We wanted to kind of push that deadline a little bit earlier in order to be able to address the 20, 30, 40, empty storefronts that are increasingly rising in the community,” said Leung, who characterizes Chinatown as a “museum without walls.”

Josh Chuck, a local filmmaker behind the documentary “Chinatown Rising,” has noticed younger generations dining or participating in events in Chinatowns. A friend who works in tech began last year picking up orders for friends who wanted to support Chinatown restaurants. Soon he was making spreadsheets to track 400 deliveries.

“Honestly, there’s no way I could have imagined something that would galvanize these people that I know. Even myself, like, I feel much more connected and committed,” Chuck said. “It’s a silver lining.”

In New York, the first of five summer night markets start next month in the city’s Chinatown. It will be the biggest event to date for Think!Chinatown. The 5-year-old nonprofit has done numerous projects like artists-in-residency programs and oral histories. But last year after a series of verbal and physical assaults against Asians, they partnered with Neighborhoods Now, a local pandemic relief initiative, on Chinatown Nights.

It was a small-scale gathering of less than 10 artist booths and food trucks in Forsyth Plaza park. Despite a “crazy” two-month prep window, there was a collective feeling of “we just need to be together,” said Yin Kong, Think!Chinatown co-founder and director. And there was a “tectonic shift” with philanthropy focusing on equity.

“It reprioritized these other organizations that traditionally would have funded other things to focus on how to support communities of color in a different way,” Kong said.

The expanded event next month will have 20 booths and sponsorships, and will be scheduled when most Chinatown restaurants are closed so owners can participate.

“The mechanisms that got us there would not have happened without the pandemic,” said Kong, who feels Think!Chinatown is now seen as more “legit” with better funding, full-time staff and the possibility of an office space instead of her dining table.

In Vancouver’s Chinatown, the pandemic only exacerbated ongoing issues of vandalism, graffiti and other crimes. But within the last year, the Canadian city managed to launch cultural projects planned before COVID-19.

Last month, the Chinatown Mural Project showed off a series of pastoral murals painted by a local artist on six roller shutters of a tea shop. In November, the interactive Chinatown Storytelling Centre with relics and recorded oral histories opened.

“We would have done this anyway (regardless of the pandemic),” said Carol Lee, chair of the Vancouver Chinatown Foundation, which oversees the Centre. “But you know, in some ways, it makes you feel like you have more purpose because it’s more necessary.”

Jordan Eng, president of the Vancouver Chinatown Business Improvement Association, agreed that there’s more collaboration and “a lot more youth interest than there was five, 10 years ago.”

There are fewer than 50 Chinatowns across the U.S. with some more active than others.

Many Chinatowns took shape in the 19th century as Chinese laborers arrived to mine for gold out West or work on the railroad. They lived there because of blatant discrimination or self-preservation. Their housing was single-room-occupancy units, or SROs, with communal kitchens and bathrooms, said Harvey Dong, a lecturer in ethnic studies and Asian American studies at University of California, Berkeley. Many older Chinese Americans and immigrants in Chinatown reside in these units still.