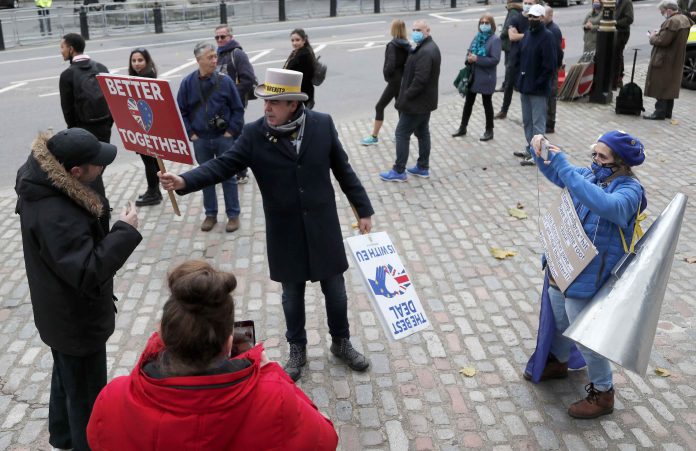 The U.K.’s chief Brexit negotiator said Sunday before renewed talks that a trade deal with the European Union may not succeed, but he was still hopeful of a resolution.

Arriving in Brussels, David Frost tweeted that “there has been some progress in a positive direction in recent days.”

“We also now largely have common draft treaty texts, though significant elements are of course not yet agreed,” he said. “We will work to build on these and get an overall agreement if we can. But we may not succeed.”

Britain left the EU on Jan. 31, but continues to follow the bloc’s economic rules until a transition period ends on Dec. 31. The two sides are trying to strike a new trade deal before then, but key sticking points such as fishing rights and competition rules haven’t been resolved.

The two sides say any post-Brexit deal must be agreed upon by mid-November in time for it to be ratified by year-end.

Environment Secretary George Eustice said the coming week is “a week when things need to move” for the U.K. and the EU to come to an agreement.

“Both sides recognize that time is very, very short,” he said. “There does come a point frankly where businesses need to know what they are preparing for.”

Ireland’s foreign minister warned Sunday that there will be no trade deal if Britain continues to push ahead with legislation that breaks a legally binding Brexit treaty with the EU.

Prime Minister Boris Johnson’s government has acknowledged that the Internal Market Bill breaches international law. But officials insist the bill is needed as an insurance policy, or “legal safety net,” to ensure smooth trade among all parts of the U.K. — especially Northern Ireland, which shares a border with the EU — no matter what happens to U.K.-EU trade after Brexit.

Irish Foreign Minister Simon Coveney told Sky News that “there is no way the EU will agree to ratify a new agreement if the British government is breaking the existing agreement that is not even 12 months old, and breaking international law by doing that.”

Britain’s House of Lords voted by large margins Monday to reject the bill, which has also drawn condemnation by U.S. President-elect Joe Biden, among others.

A failure to strike a deal will hurt both sides, with businesses facing tariffs and other barriers to trade starting on Jan. 1.