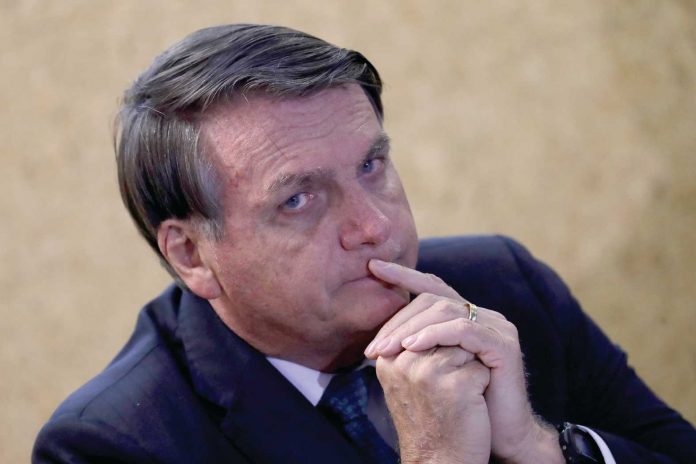 Biden said during Tuesday’s debate with President Donald Trump, an ally of Bolsonaro, that foreign countries should give Brazil $20 billion to stop Amazon deforestation, and that the country should face repercussions if it fails.

The Brazilian leader has insisted on economic development of the region, drawing condemnation from environmentalists, climate scientists and foreign leaders who say the forest is an important carbon sink and must remain standing to achieve climate change goals.

“The greed that some countries have over the Amazon is a reality,” Bolsonaro said on Twitter. “But the confirmation by someone who is fighting for the command of his country clearly signals that he wants to give up a cordial and profitable coexistence.”

Bolsonaro has repeatedly accused unnamed imperialist forces of trying to take over the Amazon, which harkens back to the stance of the 1964-1985 military dictatorship.

“What some have not yet understood is that Brazil has changed,” Bolsonaro said. “Its president, unlike left-wing presidents of the past, does not accept bribes, criminal land demarcations or coward threats toward our territorial and economic integrity. Our sovereignty is non-negotiable.”

During Tuesday’s debate, Biden said Brazil’s rainforests are being torn down.

“I would be gathering up and making sure we had the countries of the world coming up with $20 billion, and say, ‘Here’s $20 billion, stop tearing down the forest. And if you don’t then you’re gonna have significant economic consequences.'”

Preliminary official data published on Aug. 7 indicated that deforestation in Brazil’s Amazon region over the past 12 months could be at a 14-year high. The Brazilian Amazon lost 9,205 square kilometers (3,554 square miles) of vegetation in the 12 months ending in July, according to data from the country’s space agency.

Maurício Santoro, a professor of political science at the State University of Rio de Janeiro, said the statements show that “Bolsonaro’s relationship is with Trump, not with the U.S..” He said the international isolation around Brazil’s leader could deepen if Biden wins the election.

“If Brazil wants to keep a good relationship with a Biden administration it will have to make many concessions in the environmental area, beef up the enforcement on deforestation, wildfires issues, and show that it is taking the criticism seriously,” Santoro said.

Vitoria Saddi, an economy professor at Insper university in Sao Paulo, said Bolsonaro should be worried about Biden’s threat. “The U.S. already does that (impose sanctions) against China for a lack of environmental surveillance. The problems of the Amazon are even bigger,” she said.

“Only one question: those $20 billion of aid from Biden, is that per year?.” Salles asked, adding that amount is “40 times bigger than the Amazon fund” sponsored mainly by European nations.

Under international pressure for action against fires in the Amazon, Bolsonaro put the army in charge in May. But The Associated Press found the operation dubbed as “Green Brazil 2” has had little effect and prosecution of rainforest destruction by ranchers, farmers and miners has almost halted.

But Biden’s pledge also rankled some local critics of Bolsonaro, such as bank teller Fernando Campanati, 40, underscoring the sense of wounded sovereignty many Brazilians feel.

“Why can’t First World countries control their carbon emissions? We are paying the price for industrialized countries,” said Campanati, who has no favorite in the American presidential elections. “(The Amazon) is an internal affair.”