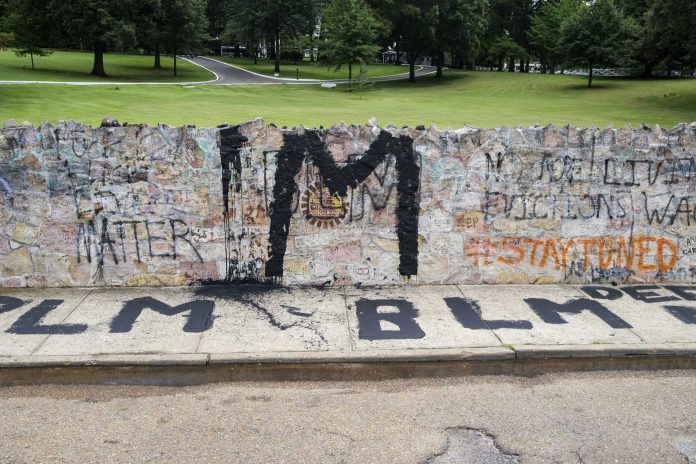 Messages of Black Lives Matter and “Defund the Police” were spray painted on several tourist attractions in Tennessee on Monday night, including Graceland, the Elvis Presley estate, authorities said.

The graffiti phrases were found Tuesday morning outside Graceland, the Levitt Shell Amphitheater in Overton Park and the “I Heart Memphis” mural in midtown Memphis, news outlets reported.

Besides “Defund the Police,” expletive-laced messages about President Donald Trump and Memphis Mayor Jim Strickland and demands to arrest the Louisville police officers who killed Breonna Taylor were also scrawled on the walls.

Memphis police said they were investigating the incident.

Graceland spokesperson David Beckwith said the estate had no comment on the graffiti but Bill Stanley, Elvis’ stepbrother, told WMC-TV he was appalled by the messages.

“This is totally uncalled for,” said Stanley. “One of the saddest days of my life. I mean, besides the day that Elvis passed away, this right here is right up next to it.”

Graceland visitors have been writing on the wall outside the estate since Presley’s death in 1977.

Levitt Shell executive director Natalie Wilson said this is the sixth act of vandalism at the Shell this year.

Wilson said she doesn’t condone the graffiti but the actions are devastating because of budget issues due to the pandemic.

“Defacing our stage is not appropriate; however, we acknowledge their pain and we want to say to our community ‘it’s time the conversations are deeper, they’re more productive and that change happens with good communication,'” said Wilson.

Path to photographing homeless began in shock then curiosity