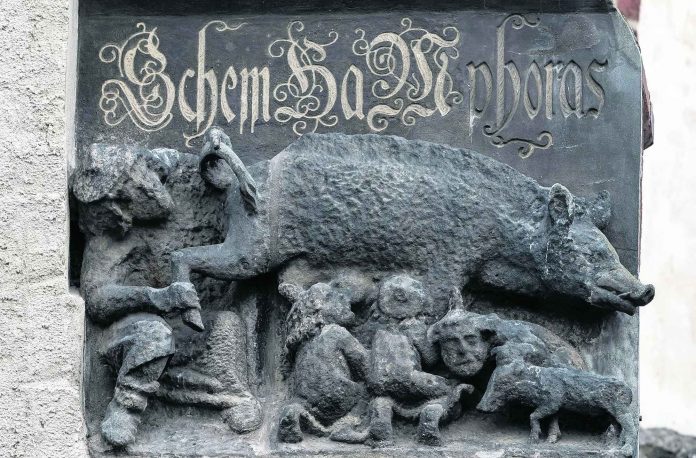 Authorities, churches and Jewish communities in Germany’s southern state of Bavaria have agreed that anti-Semitic statues and carvings dating back to the Middle Ages shouldn’t be removed from churches, an official said Tuesday.

The Bavarian government’s point man against anti-Semitism, Ludwig Spaenle, said that relics such as the “Judensau,” or “Jew pig,” sculptures that still adorn some churches should be explained “visibly and easily recognizably” where they stand, the news agency dpa reported.

Bavaria’s association of Jewish communities agreed on the approach with representatives of Christian churches and state officials, according to dpa.

There are around a dozen such relics in Bavaria, such as one on the cathedral in Regensburg. Spaenle said those considering the matter had decided unanimously against their removal, and argued that if the statues were removed from their context it would be hard to explain them. They might also lose their function as a warning against anti-Semitism, he said.

The Bavarian decision comes as a dispute about a “Jew pig” sculpture elsewhere in Germany makes its way through the court system.

Earlier this year, an appeals court rejected a Jewish man’s bid to force the removal of the 700-year-old relic, which depicts people identifiable as Jews suckling the teats of a sow while a rabbi lifts the animal’s tail, from a church in the eastern city of Wittenberg where Martin Luther once preached.

The plaintiff, who argues that the sculpture is “a defamation of and insult to the Jewish people,” has suggested removing the relief from the church and putting it in a nearby museum dedicated to Luther’s life and work. He has taken the case to a federal court.