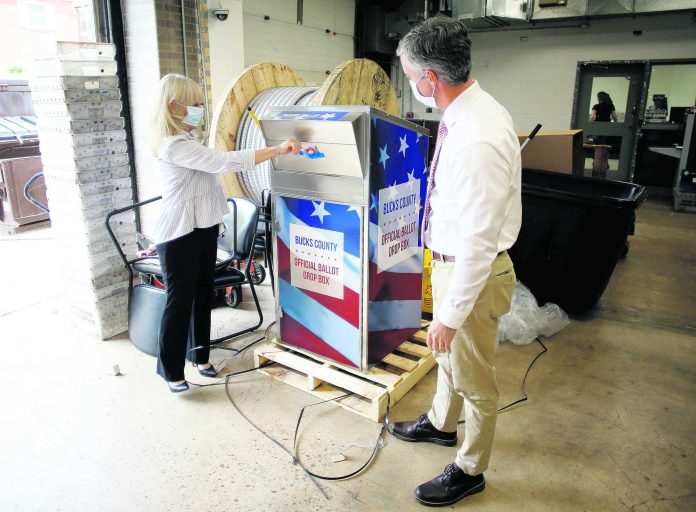 With the Trump administration openly trying to undermine mail-in voting this fall, some election officials around the country are hoping to bypass the Postal Service by installing lots of ballot drop boxes in libraries, community centers and other public places.

Such boxes have been used with success for several years in states like Oregon, Washington and Colorado that rely largely or entirely on ballots that must be sent in. But their use is being expanded because of the coronavirus outbreak and, more recently, concerns about the post office’s ability to do its job.

State or local authorities in places such as Arizona, Wisconsin and Pennsylvania are pressing for more boxes or drop-off sites that would enable ballots to reach election officials without going through the mail.

“Donald Trump continues to undermine the legitimacy of mail-in absentee ballots by attacking the U.S. Postal Service,” said New York state Sen. Brad Hoylman, a Democrat who is sponsoring legislation to set up drop boxes beyond the usual confines of voting sites and local election offices. “New York can hit back on this anti-democratic fearmongering by establishing absentee ballot drop boxes across the state to help ensure the integrity of these ballots.”

In the potential battleground state of Wisconsin, the five biggest cities won a $6.3 million grant from the nonprofit Center for Tech and Civic Life to help administer the November election, including installation of drop boxes. Milwaukee Mayor Tom Barrett said his city will use some of its $2.1 million share to buy more than a dozen to install at libraries and other locations.

Arizona’s secretary of state is ordering about 70 more for the mostly rural areas that have requested them, and a spokeswoman said some counties are also purchasing extra ones.

Washington state election officials said that there are 450 drop boxes statewide, and there are discussions about adding more.

Last week, the Postal Service, having cut overtime and late deliveries, began warning states that it can’t guarantee all mail ballots will be received in time to be counted. President Donald Trump, who has been sowing unfounded fears of vote-by-mail fraud for months, last week admitted blocking Postal Service funding so it would be harder to process the expected surge of millions of ballots.

Election officials in some states — mainly Republican-led ones — have come out against adding drop boxes, saying doing so would be too costly, raises security concerns or would violate state laws.

In a tweet Monday, Trump sought to cast doubt on the security of such boxes, saying: “So who is going to ‘collect’ the Ballots, and what might be done to them prior to tabulation? A Rigged Election? So bad for our Country.”

Typical security measures for drop boxes include video surveillance, locks, tamper-resistant seals and chain-of-custody logs that are completed each time ballots are collected.

Local officials, at a minimum, should have a drop box at their main county or city office building, and it is recommended that they have one box for every 15,000 to 20,000 registered voters, according to a memo issued by federal authorities in response to the viral outbreak.

The Brennan Center for Justice, a public policy institute at New York University Law School, has estimated that nearly 11,700 ballot drop-off boxes will be needed for November, at a cost of $82 million to $117 million for purchase and installation.

Washington state has boxes in churches, fire stations, libraries, colleges, city halls, shopping centers and courthouses. In Oregon, they are not only inside libraries and government buildings but on the street outside high-traffic businesses such as Starbucks, McDonald’s and movie theaters.

“The whole idea really is to meet people where they are in their everyday lives,” Amber McReynolds, CEO of the National Vote at Home Institute and a former elections official.

In Pennsylvania, a federal lawsuit by the Trump campaign and Republican National Committee has cast drop boxes into a legal gray area.

That was after Philadelphia and its suburbs used them — to great success, according to officials there — in the June 2 primary, when a record-smashing 1.4 million ballots arrived by mail. Democratic state lawmakers are countersuing to get a judge to clarify that drop boxes are legal.

In the meantime, Philadelphia and several suburban counties plan to create satellite election offices where people can register to vote, apply for a ballot and submit it. Philadelphia wants to establish as many as 17.

Suburban Delaware County is plowing ahead with its plans for drop boxes without waiting for the outcome of the legal dispute, said County Council member Christine Reuther, a Democrat. With the help of grant money, the county will buy 50 boxes and have them installed by Oct. 1.

The goal of the Trump campaign’s lawsuit, said Reuther, was to “scare people away from doing this.”

“We are gambling a little bit,” she said. “I think our lawyers feel pretty confident about the lawsuit.”

Louisiana isn’t debating adding drop boxes, but the state’s elections chief, GOP Secretary of State Kyle Ardoin, is proposing to allow parishes to set up curbside drop-off stations where people can hand their absentee ballots to someone in person rather than put them in the mail.

North Carolina has no plans to install boxes, and Oklahoma doesn’t use them either, though voters can drop off ballots at one location in each county. But the state plans on printing green return envelopes to help postal workers more easily identify mail-in ballots and give them priority.

Ohio will have a single drop box in each of its 88 counties. Secretary of State Frank LaRose, a Republican, said he would need legislative authority or clearance from the attorney general to add more.