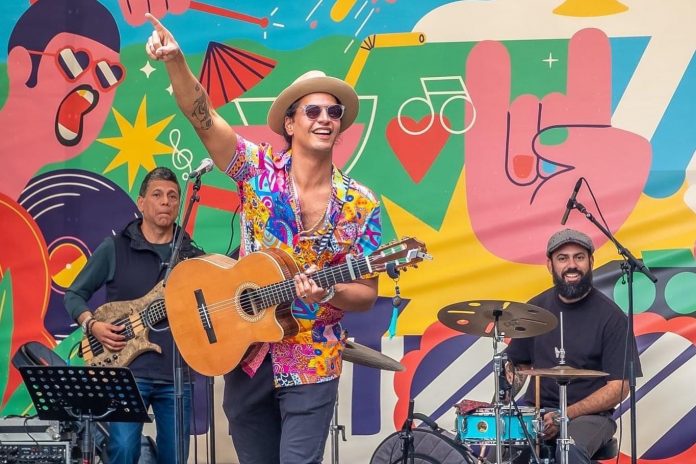 He is an Aruban musician living in the Netherlands, and when he gets on stage, he shows the Latin blood inside him, delighting the audience with catchy songs from different countries like Brazil, Colombia, Venezuela and the Caribbean.

In an interview with our reporter, Aymar says that he chose Latin rhythms because in the Netherlands there are not many artists performing the music from the old days, like Bolero or Trio Los Panchos. For this reason he decided to do this, since he sings in different languages like Spanish, Portuguese, French and Italian. “This way people get more of the feeling that they are in the past and in their country as well,” he says.

In one word, he describes himself as “happy, because I do what I love. I let people live their lives and I don’t live with envy.”

He has been living in the Netherlands for 16 years already, and he dedicates his time to his six-month old baby, his partner who will soon become his wife, his music lessons three times a week, and his shows.

Manuel is their first child. He says that together with his partner they are learning a lot from him. Torres himself is “attending father school”, and every day he makes sure to dedicate a lot of time to his child and playing music for him, since the first years are very important for a child’s development.

Torres mentions that since he was very young he decided to sing. He was a fan of Shakira and liked watching television, there was a show on a Venezuelan TV channel called “Club de los Tigritos”, which was very famous among children and teenagers in the 90s for the series of Salserin. “I grew up with all those artists and I wanted to become a singer like them. Then I learned singing when I was 16, and took it more seriously and continued improving myself.”

Regarding the difference between performing in the Netherlands or Aruba, Torres explains that there is no differnce, since “I am always myself as an artist. It doesn’t matter what country you go, you stay yourself and with the show you created, if you change something it’s going to feel weird. What I do change is my repertoire [when I’m in Aruba], because I know that many in Aruba do know the songs. Like when I play Juan Luis Guerra, there are other artists who also play Juan Luis Guerra, so I try playing a different song than what you already hear in Aruba.”

But the audience in Aruba is different, more difficult compared to the Dutch, because they know the music already. “If I play songs other than what they are used to, they enjoy, but in the Netherlands I can play more music that is played here,” he says.

Aruba has a lot of talent in the cultural, creative and artistic industry, but sometimes do not receive enough support from our own community. Aymar commented: “People need to take musicians and artists in general seriously. Some of them are not doing this job as a hobby but they live from it. Also the government can help see the musicians and artists more like a real worker, a public servant, because they are also important for our tourism. It would be good if we mix the artists with tourism so that the tourists have more to enjoy.”

Aymar also points out that some people question the work of a musician. “There are still people with the belief that music is a hobby, but if you give people a chance to see it more like a job, more people in Aruba will improve in music, there will be better musicians that can perform abroad and living in Aruba. This is true for all artists, like painters, artisans, fashion designers, among others.”

Aymar also says that he is a fan of many artists, local and international, and here he announced that he wants to collaborate with beloved Aruban singer, Edjean Semeleer. He is planning and is busy with something to sing with him. “But since I had my son, I took a pause from writing and composing songs. This year I will start again with my own songs.”

Finalizing, he leaves as a message for people to support the youth in music and art of any category. “Push those who do want to go into music, help them and stop seeing music as just a hobby,” he says.
For more information, you can find Aymar on social media as “Aymar Music.”

Images are courtesy of Aymar himself.