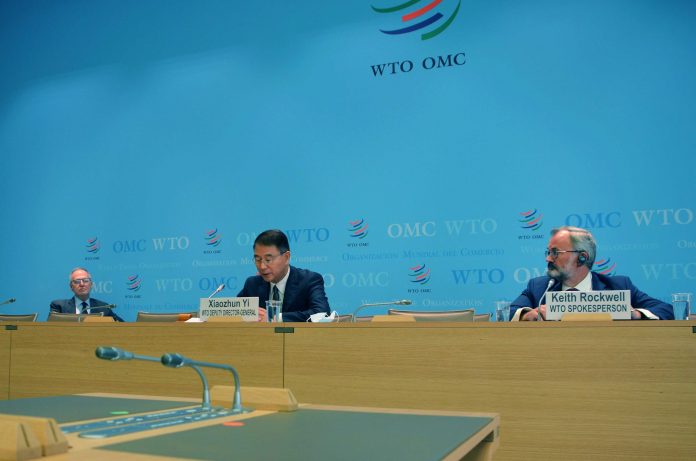 International arbitrators said Tuesday that the European Union can impose tariffs and other penalties on up to $4 billion worth of U.S. goods and services over illegal American support for plane maker Boeing. The move further sours transatlantic ties at a time when the coronavirus has doused trade and savaged economies.

The ruling by the World Trade Organization arbitrators, which could inflame Trump administration criticism of the Geneva-based body, amounts to one of the largest penalties handed down by the WTO.

It comes a year after another ruling authorized the United States to slap penalties on EU goods worth up to $7.5 billion – including Gouda cheese, single-malt whiskey and French wine – over the bloc’s support for Boeing rival Airbus.

Now the EU can have its own turn at trade punishment, and has already been considering which American products it could target. A preliminary list that the bloc has released suggests it could go after a wide range of products including frozen fish and shellfish, dried fruit, tobacco, rum and vodka, handbags, motorcycle parts and tractors.

In the past in trade disputes, the EU has sought to roughly match products affected by previous American sanctions — such as by hitting U.S. distillers if French wines were targeted. The bloc could aim for areas where Boeing planes or parts are made.

The latest WTO decision is final, cannot be appealed, and puts the final word on a standoff dating back to 2006. It is just one part of a string of long-running disputes between the two plane-making giants at the WTO. And it sets the stage for what could become intense negotiation between the EU and U.S. to end what could become tit-for-tat transatlantic sanctions.

The arbitrators were tasked with setting a dollar value in sanctions such as tariffs that the EU could impose after the WTO’s appellate body found last year that Boeing had received at least $5 billion in subsidies that were prohibited under international trade rules.

The United States had argued that the illegal support merited no more than $412 million in penalties, while the European bloc had countered that they deserved nearly $8.6 billion. The award in essence was nearly 10 times more than what the U.S. had claimed, and under half that the EU wanted.

The EU had argued that tax breaks for Boeing from Washington state, which was once headquartered in Seattle and has major manufacturing operations in the state, unfairly harmed Airbus jets in the large single-aisle civil aircraft market — namely the A320neo and A320ceo aircraft. The U.S. argues that those tax breaks ended this year, eliminating any basis for the award.

U.S. Trade Representative Robert Lighthizer told The Associated Press that the decision “doesn’t really authorize any action on their part” because Washington state has already repealed the tax breaks that the WTO deemed illegal. “Our view is that we’re in compliance,” Lighthizer said. He also said that negotiations with the EU on a resolution to the dispute are ongoing.

The WTO arbitrators said that the lifting of the tax breaks was not enough to prevent the award in favor of the EU.

European Commission Executive Vice President Valdis Dombrovskis said Tuesday’s ruling move will allow the EU to slap tariffs on American goods entering Europe, but “I would much prefer not to do so – additional duties are not in the economic interest of either side, particularly as we strive to recover from the COVID-19 recession.”

“It is my hope that the U.S. will now drop the tariffs imposed on EU exports last year,” he added. “This would generate positive momentum both economically and politically, and help us to find common ground in other key areas.”

Bernd Lange, chairman of the European Parliament’s trade committee, said the EU should enact the tariffs now, though he urged both sides to enter talks. He cautioned that “the EU should not be naive” in case of a lack of “constructive engagement from the American side even after the presidential elections.”

Boeing, in a statement, wrote: “We are disappointed that Airbus and the EU continue to seek to impose tariffs on U.S. companies and their workers based on a tax provision that has been fully and verifiably repealed.” It also argued that WTO rules are only used to force compliance – and the plane maker insisted the U.S. is now in compliance — so any EU tariffs “would not be permissible.”

“Rather than escalating this matter with threats to U.S. businesses and their European customers, Airbus and the EU should be focusing their energies on good-faith efforts to resolve this long-running dispute,” Boeing said.

Boy whose mother joined IS in Syria returns to dad in...