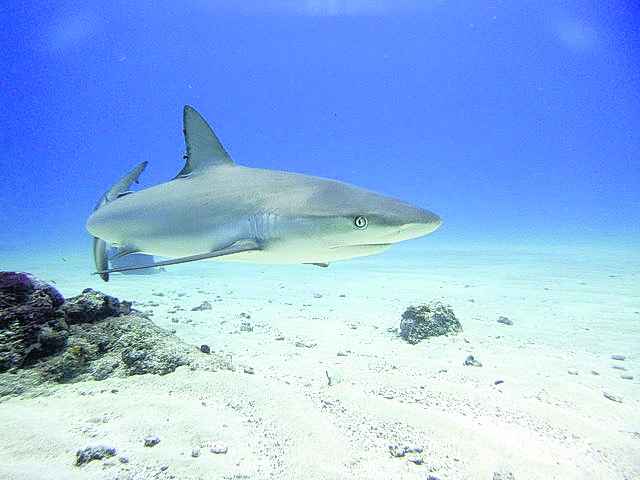 Wageningen Marine Research reported ten reef-associated shark species in the Dutch Caribbean in a published study as part of Dutch Caribbean Nature Alliance (DCNA)’s Save Our Sharks Project. The most common species are the nurse shark and the Caribbean reef shark. Overall, more sharks were observed in conservation areas than in unprotected areas, highlighting the importance of these zones in shark conservation.

Sharks keep our oceans healthy. These top predators remove sick or weak members of their prey populations. A decrease in number of sharks leads to a disturbed natural balance in the sea. This can affect the overall fish population, and good fish stocks are not only important for fishermen that depend on fishing but also for (dive) tourism and the local community.

Sharks are some of the most misunderstood species. For generations sharks had an undeserved bad reputation. People tend to see them as terrifying animals that pose a danger to everything that swims in the ocean, including humans. But we now know that is very far from the truth; these magnificent creatures are essential to healthy oceans and risks to humans are small.

DCNA’s Save Our Sharks Project

There is a lack of knowledge concerning the distribution and abundance of shark and ray species throughout the Dutch Caribbean. To combat this knowledge gap, from 2015-2018, DCNA ran the “Save our Sharks” (SOS) project for the Dutch Caribbean, funded by the Dutch Postcode Lottery. In this project DCNA collaborated with local fisherman and scientists and aimed to build popular support for shark and ray conservation amongst the local community, as well as increasing knowledge about shark and ray species within the region by conducting a number of research projects.

In BRUVs deployed around Sint Maarten, Curaçao and Bonaire the most common detected shark species were Caribbean reef shark, with Sint Maarten also frequently showing nurse sharks. Overall, more sharks were observed in marine parks or areas of conservation than in unprotected areas, highlighting the importance of these zones in shark conservation. Furthermore, when comparing the BRUV surveys from Sint Maarten, Curaçao and Bonaire to previous BRUV studies from Aruba, Saba, Sint Eustatius and Saba Bank, it showed that the Aruba survey had the largest shark diversity (8 species) and the Bonaire survey the lowest (2 species). The Saba survey documented 5 shark species, Saba bank had 4 shark species with Curaçao, Sint Eustatius and Sint Maarten each registering 3 shark species. There was an additional BRUV submarine test at 300 metres deep off Curaçao which found an additional shark species (Cuban dogfish). In total, at least 10 shark species were seen within the Dutch Caribbean in the different BRUV surveys.

Both the BRUV and acoustic telemetry studies showed higher presence of reef associated sharks within the conservation zones, along with high site fidelity and small home ranges. Furthermore, as some longer distance movements were also documented, interconnectivity between these areas is just beginning to be understood. The ongoing study on acoustic telemetry (funded by the Ministry of Agriculture, Nature and Food Quality (LNV)) will yield more data on this. Therefore, not only are local marine parks crucial for the conservation efforts of sharks and rays, but larger conservation networks, such as the Yarari Marine Mammal and Shark Sanctuary which compromises all the waters of Bonaire, Saba and Sint Eustatius, are vital to protect entire populations.

Visitors honored on our beautiful island

“We’d love to take you home”