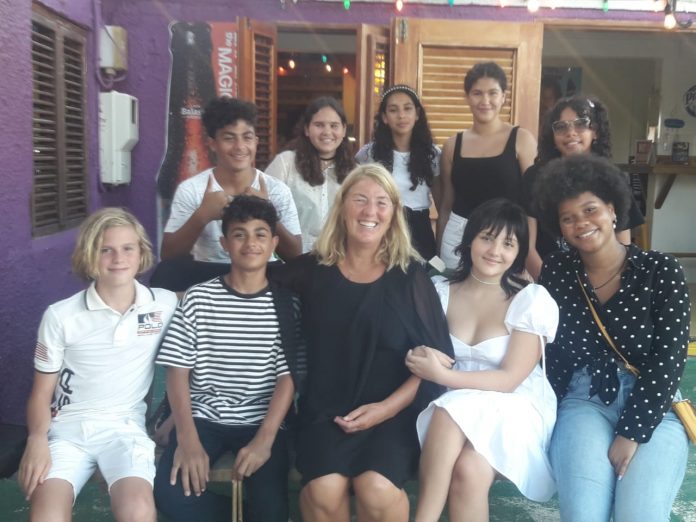 There are so many musical groups nowadays, which can be found on the internet, making it impossible to know how many groups are born each day. In Aruba, recently a youth musical group was created at a school with the goal of entertaining and to keep growing in music.

Rocking Youth Band is a group formed by 9 youngsters aged between 13 and 15 years. Last weekend, they had their first performance outside their school, which was where their band was created a year ago. Normally they performed at different school events, and this took place in a known setting.

In the beginning they were directed by their teacher Petra Alben, but Alben moved to the Netherlands, leaving behind the plea to not waste their talent and to present the group with various instruments like piano, bass, guitar, drum and ukulele, among others.

This time our reporter did a special interview with Tony Parejo, a professional musician who gives music lessons. He represents this youth musical band and is also the father of two of the band members. He says that their first performance for the general public last Saturday was a complete success, as the people present thoroughly enjoyed it.

The members received music lessons at the school, where some of them are still students, and each received private lessons for the instruments in which they specialized.

Rocking Youth Band consists of Paula Spinosi, 14, Jenna Croes, 15 – both dedicated to playing ukulele; Vida Maria, 13 who is in charge of violin and vocals; Isabella Manrique, 14, who sings; Ethan and Ian Parejo, 14, specialized in drum, percussion, violin and guitar; Cynthia Rafael, 14, dedicated to bass guitar; Lukas Teklenborg, 15, with cajon and percussion; and Hugo Vroegop, 13, who plays the piano.

These 9 teens, according to Parejo, have a special difference from other musical groups, because their performance varies. They not only play rock, pop or ballads, but they also mix cajon with ukulele. There are also three voices singing, and one of them is opera. Currently, Parejo said that they are busy with mixing a modern concept with opera, a personal production project.

Currently, the band does covers of various artists, but they also already have their own songs and their own production in that musical area. “They are very excited to do that, but they’re barely one year in, combining their studies with music lessons and the band”, Parejo said.

As young teens, each of them has their school responsibilities, their aspirations and other hobbies, like windsurfing or becoming a plane pilot. They have the purpose of doing a production in one year’s time, which is the school year which has just started. During this time they want to produce their own songs with producers and arrangers, in a way that makes everyone happy with the results, without losing their focus on school.

Parejo also said that they have decided to change the band’s name because they had the name of the school where they study, which is ‘Schakel Band’; but because some of them have changed schools, they decided to change to ‘Yessified Chicken Nugget’ – Parejo explained that not all of them were in agreement with that name, and this is why they changed the name again, to ‘Rocking Youth Band’.

Meanwhile they continue training their new songs. Parejo mentioned that they are organizing an activity for the month of September, but he could not share any details yet.

As they are a relatively new musical group, they don’t have social media as a group yet, but their representative, Parejo, assured that soon the community will hear more of them and come to know their talent.

Gourmet Dinner at The Kitchen Table by White