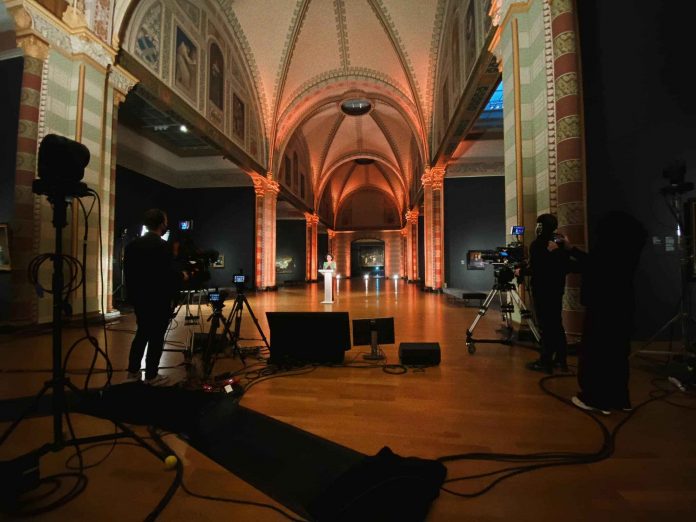 Arubans Mario Michael Gonsalves and Valentino Angela always dreamed of breaking barriers in the creative industry such as in art, culture and the media industry in general, but the resources to do this in Aruba are very limited. With this in mind, they managed to open their own creative agency in Amsterdam two years ago called ‘Recent’ and this year -despite the global pandemic- was their best year so far. Together with a crew of 50 under their guidance they were able to wrap up their first production, which took place at the Rijksmuseum in Amsterdam, the Netherlands.

The project took three months of preparations, and had a peak live viewer count of almost 2.000 people in the museum world from the Netherlands, Suriname, Curacao and other islands. This was the first ever live event organized by the museum itself. Gonsalves is a Dutch-Caribbean film director born in Almere, the Netherlands on April 11, 1992. His parents moved to Aruba with him when he was only three years old, his mother is Aruban. In 2011 Mario started his own YouTube show and gained attention from various art institutions in Aruba. These art institutions gave Mario a funding to further expand his knowledge on filmmaking as the island of Aruba didn’t have any educational programs focusing on film at the time.

Mario’s first introduction to the professional world of filmmaking was in Maine, USA where he followed cinematography classes given by cinematographer Roberto Schaefer, ASC. From there on Mario got additional scholarship funding from the art institutions in Aruba to further develop his knowledge of film in Los Angeles where he attended NYFA & USC taking classes in ‘introduction to filmmaking’ and ‘music video production & business’. Later in 2015 Mario attended the University of the Arts (HKU) in Utrecht, majoring as a film director. While studying at HKU Mario has worked on multiple projects for established artists and record labels all around the world such as Sony Music, Universal Music, Disney Music and more. While developing himself as a music video director he got more interested in the art of storytelling and started directing more narrative work.

Valentino Angela studied at University of the Arts (HKU) in Utrecht and is a Graphic Designer and Artist.

The Rijksmuseum first opened its doors in 1800 as a National Art Gallery. It was then located in the Huis ten Bosch in The Hague. The collection consisted mainly of paintings and historical objects. In 1808 the museum moved to the new capital Amsterdam, where it was located in the Paleis op de Dam. The first purchase, De Zwaan by Jan Asselijn, was bought for 100 guilders and is still considered one of the highlights of the Rijksmuseum. In 1808 the collections were moved by order of the new king Louis Napoleon to Amsterdam, which became the capital of the Kingdom of Holland. The artworks and objects were housed in the Paleis op de Dam, the former Amsterdam town hall. There they were united with the city’s most important paintings, including Rembrandt’s Night Watch . Because the collections are constantly growing and museum insights are constantly changing, a lot of work has been done on the Rijksmuseum building over time. During the last renovation, the building got back the original structure of Cuypers. The buildings have disappeared from the courtyards. Painting, crafts and history can no longer be seen in separate parts of the building, but together show a story about Dutch art and history in one chronological circuit. The building has also been modernized in all kinds of other areas, while at the same time it has become more like the Cuypers building on the inside: ‘Verder met Cuypers’, is what the Rijksmuseum calls this. The new Rijksmuseum will thus be a wonderful museum for the visitor of the 21st century!