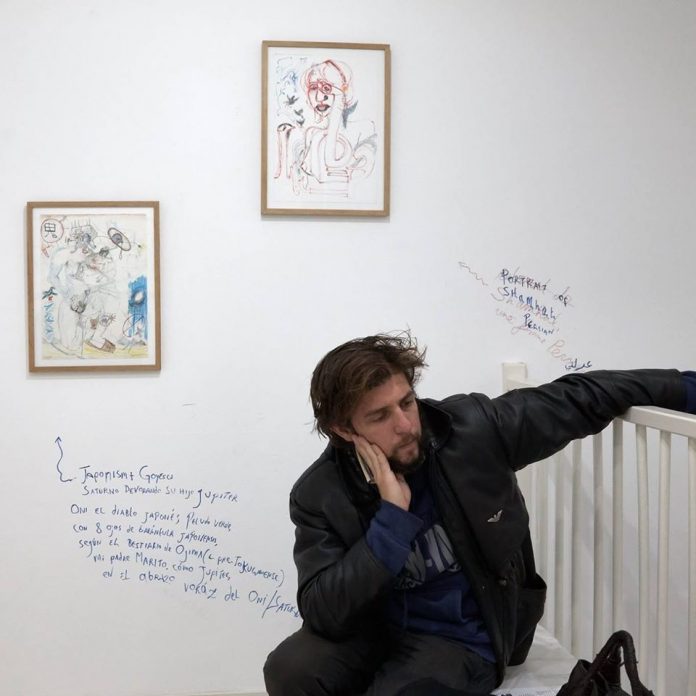 Aruba Today is connecting to our beloved readers abroad who have a special bond with the island. We launched columns like Aruba To Me Is … and My Favorite Hotel Staff where our fans can send pictures and words that express their love for Aruba and its workers in the hospitality industry.

In these difficult times we also think about our Aruban friends living abroad. How they are doing and what is their life experience right now, we wonder. The first story in this series is from Aruban Arturo Desimone who lives in Spain. Thank you for sharing this amazing article with us Arturo!

“Mostly I am dedicated to writing in various forms, and to making visual art. I have published essays focusing on politics and art criticism; two books of poems and drawings appeared recently in the UK and in bilingual edition in Argentina. My first “solo” exhibition of drawings inaugurated in November-December 2018 in an Amsterdam gallery. Born and raised on Aruba, I left at the age of 21. My mother still lives on Aruba. Though I had not anticipated it, like many Arubans I first ended up migrating to the Netherlands, where I studied “Religious studies and Politics” for a period in Utrecht. Later I resided for periods in Tunisia, and a longer time in Argentina, where I also have family.

This year I went to live in Spain hoping to improve mastery of the language, and to give book presentations of the first Spanish translation of my recent book of my poems, “La Amada de Túnez” (About a Lover from Tunisia) in the city of Cuenca and in the Canary Islands. I was still in the process of finding an apartment in Andalucía, lugging my belongings in suitcases, when the Spanish State announced some of toughest epidemic measures in Europe.

All hostels emptied and closed. I ended up relying on air bnb’s in Córdoba (the city I had planned to move to). In Córdoba, the lockdown caused more panic, and seemed more foreboding than Málaga, where I am now. I think this owes partly to Córdoba being a very old city. There, history and memory of past crises with plagues and quarantines remain present, a residue within Córdoba culture, like the sediment of the Guadalquivir river. The Arabic-medieval style of the old city of Córdoba has not changed drastically over the centuries, with many fountains, shrines and old bathhouses from a time when people quite actively thought of plagues and how to prevent them. Small pharmacies with the sign “Botica” dot every street corner. Where I lodged in the old city, after sundown women would appear in their flowered, latticework windows and balconies and start clapping. At first I thought this was a way to break the silence and monotony, it seemed almost like protest—the kind of behavior one would expect in a prison. Only after the third or fourth day, did I realize they were congratulating each other for good behavior in adapting to the quarantine. “¡Más fuerte!”

From the start, Spaniards seemed very eager to comply with martial law: strapping on masks, scarves and gloves; commanding others to do so. My neighbor in the old Moorish-style building was an avoidant boy, who moved out of his family-home because of fear of infection. People around me in these edifices were informing on each other to their landlords, accusing one other of breaching rules, often using WhatsApp to telegram reports. Another guest in the residence overheard my online video-conversation with a circle of writers— I and others had spoken critically of certain countries’ authoritarian measures. My neighbor called the shaky, angry manager, who then came to confront me, instructing me to obey the spirit of this lockdown. The deaths among mostly elderly patients are, of course, alarming. And the unpreparedness of de-financed healthcare systems, with so little understood still about the illness, seem to have thrown us all back to medieval ways of responding. It surprised me when, after seeking a police station for an hour in winding streets of the Judería neighborhood, I found a Scotch-taped little sign the authorities had hung on their door, announcing (in colorful letters) that because of the pandemic, police agents were also #staying home.

The total disruption of a country where I am a newcomer and foreigner, proved both interesting and difficult even if I know the language and culture. Now I wait in Málaga, to be near the airport as soon as international travel is re-enabled. In Málaga, I communicate more with people: at the greengrocer’s, the butcher’s, the bakery—the only stores open other than pharmacies and Supermarkets. Málaga, on the coast, more resembles the coolheaded Aruban temperament, though Malagueños seem more loquacious. It strikes me as a very modern crisis, when in a Catholic country, churches bolt their doors in Semana Santa while pilgrims line up in processions for the Supermarkets instead.

I miss elements of life on Aruba (the sea, among many others). A Surinamese doctor I know, who lives in Europe, told me over the phone of a “Corona hotline” opened by the Aruba House in The Hague—sounded promising. In Oranjestad stands my childhood home, uninhabited, currently as empty as the quarantined street. I thought I could sit out the emergency there, with a good bookshelf; the garden with shade, frangipane and hibiscus. But the Aruba-Corona-phone hotline attendants apologetically explained that I would not qualify for the last Saturday repatriation flight. The present government decided to limit the number of Arubans who could qualify for the last return flights from the Netherlands: acceptance would only be granted to those Arubans currently registered as actively residing on Aruba, and who had only happened to be on holiday in Europe when they got stranded. Despite being born and raised on Aruba, and having a potential address for quarantine-compliance (and now stranded) I did not qualify due to an administrative factor. Meanwhile, it seemed nearly anyone else holding the passport of a certain European country could still claim rights to a repatriation flight under similar circumstances. Instead of returning, I had to be nimble, improvising here in Spain in this new and restricted territory.”