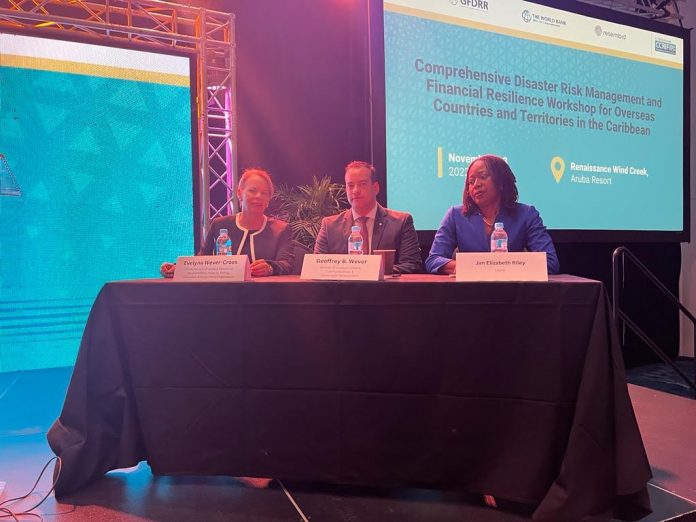 Today, November 3rd is the last day of the Comprehensive Disaster Risk Management and Financial Resilience Workshop for Overseas Countries and Territories in the Caribbean, taking place at the Renaissance Convention Center, where Aruba was chosen as host this year.

The objective of this workshop was for Overseas Countries and Territories (OCTs) in the Caribbean as well as regional organizations and partners in development can discuss and share their experiences in the integral management of disaster risk and financial protection during three days.

The workshop takes place organized by a group of the World Bank together with Caribbean Catastrophe Risk Insurance Facility with support of the European Union and Global Facility for Disaster Reduction and Recovery, under Resilience, Renewable Energy and Marine Biodiversity Programme (RESEMBID).

Redenll de Kort, consultant economist of the World Bank explained that the focus of this event is how the country is financially prepared in advance, so that when confronting a calamity the country can have some financial funds available to deal with this.

De Kort pointed out that this is already common in common areas in the Caribbean, as is the case in Sint Maarten, where in 2017 the island suffered the passage of a hurricane. “Naturally they are more focused on thinking how in the future, knowing that these things happen regularly, to prevent this from being a financial burden”, he said.

Present at the workshop were representatives from all OCTs islands, as well as some organizations like the United Nations World Food Programme, Caribbean Institute for Meteorology and Hidrology, ECLAL Subregional Headquartes for the Caribbean, Federico Baechi of the World Bank, Mary Boyer and David Sisle of the Caribbean Catastrophe Risk Insurance Facility (CCRIF SPC), Isaac Anthony and Elizabeth Emanuel from a delegation of the European Union in Guyana, and Layla El Khadraoui, representative of the regional program of RESEMBID.

Bureau Rampenbestrijding Aruba was also present during this workshop, as they are the ones in charge of preparing the island for any calamity. This encompasses different aspects, not only people, technology, data, etc. It involves keeping people safe, connecting information and cardinal aspects of management of business so that they can remain operational during a crisis or disaster.

Organizations that plan prepare and ensure to be trained in case of unexpected interruptions showed to be those who recover their normal operations faster than others.

From the first day of the disaster, the financial questions come on the table because it is necessary to evaluate how to finance aid in the short term, starting with humanitarian aid. At the same time as a government in general they need to think in the long term how to rebuild the country, how this recovery will take place and how to finance different ministries so they can have the necessary resources going forward.

This initiative was financed by the European fund RESEMBID. This fund is active for a few years already on the islands, which means that aside from the World Bank, it has already provided aid to the OCTs during, for example, the Covid-19 pandemic, which different evaluations of technical assistance to help them overcome unexpected events, like the pandemic, which was a shock. De Kort said that the pandemic might not have been a hurricane; however, it had significant impact. “World Bank was active on the ABC islands and currently in Curaçao is carrying out an evaluation of food security. Ffor Aruba as well, after Covid an evaluation can be done to see the social and economic impact of the shock”, he said.

The RESEMBID project is coming to an end, but it was active for four years according to De Kort, and is directed to helping countries think how they can be better prepare for shocks in general.
The focus was primarily on hurricanes, since this is the best known kind of impact in the Caribbean. The pandemic was something very different even though it halted tourism and income for Aruba, leaving behind a very strong impact.

Aruban minister of Economic Affairs, Communication and Sustainable Development, Mr. Geoffrey Wever was also present during this workshop. He said he is also a Territorial Authorizing Officer (TAO) for projects of the European Union, which means that all EU projects fall under his authority since he is involved reporting for this to the EU.

This is also the reason why minister Wever was invited, since it is a conference organized by the EU through the RESEMBID program.

“It is important for us to have a conference of the EU together with World Bank here in Aruba, of so many international representatives. For us this is already a big win, because these people see our island and our sites, which also have the capacity to organize such a conference here in Aruba with the presence of high level international representatives”, Wever commented. In his opinion, the contents of the conference, which is based on calamity, it is important to know how to manage these. “As small islands, if something happen to us like a hurricane or earthquake, the question is how will we deal with it? This is the reason that we need to allocate all the funds because all these challenges, a small country has them”, he said.

Prime Minister of Aruba, Evelyn Wever-Croes said that this conference is the result of various years of work. In 2018 the work began, in 2019 they were in Sint Maarten to sign the first agreements between the World Bank and various countries that are considered capacitated. They have been working on resilience to climate change for a long time. “Aruba is a blessed island where we don’t have bad weather or hurricanes compared to other islands in the Caribbean. But even so we are also in the risk area, and this is why we are participating”, she said.

What was presented is like risk insurance that countries can purchase with the World Bank to cover effects of a hurricane or other similar events. “Same as you insure your home against fire, in this case it is for the country. They do this because they see that all these islands, if something happens to us be it a hurricane, it will take a long time for us to have the funds to begin recover and rebuild”, Wever-Croes said.

Eagle Aruba Casino and Double Down Sports bar & Grill: The...

Summary of the Monthly Bulletin of December 2021: Claims on the...