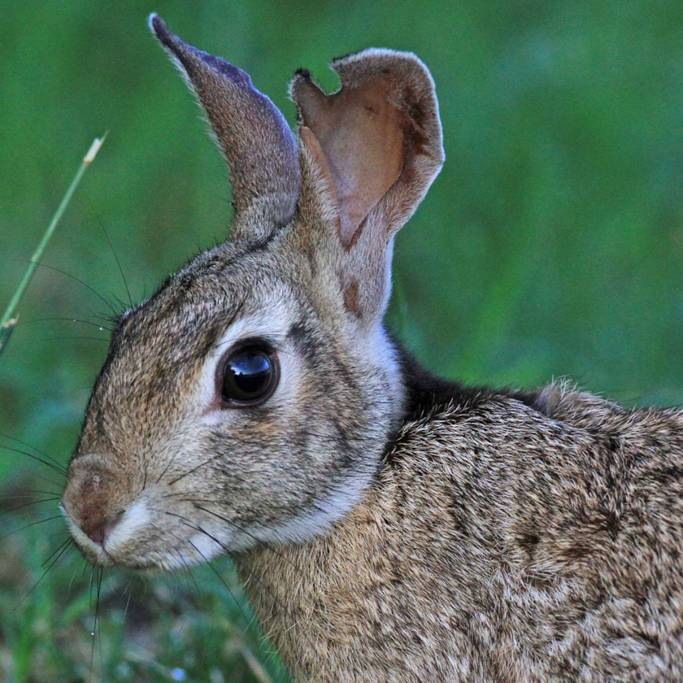 ORANJESTAD – The Eastern Cottontail rabbit (Sylvilagus floridanus) was probably brought over to the island by Indian settlers thousands of years ago as a source of food. This rabbit, locally known as Conew, has spread all over the island and has become part of our ecosystem. The very adaptable Conew can live in a wide variety of habitats, including Aruba’s xeric scrublands, where it typically grazes on weeds and grasses.

The Aruban Conew has a brownish grey color and a distinctive white belly. This white fur extends to the bottom of the tail which becomes visible as the rabbit runs. These rabbits can grow up to approximately 40 centimeters in length over their short lifespan of 3 years. Cottontail rabbits reach reproductive maturity when they are just 2 to 3 months old. A female rabbit, called a doe, finds a suitable nest spot under a shrub or rocks and lines it with fur. She can have an average of 3 to 4 litters per year averaging 5 young each. The doe only visits her young once or twice a day to nurse her babies for a period of 2 to 3 weeks. The young reach independence at 4 to 5 weeks.

The Aruban Conew is an endangered species and protected by Aruban law. The Conew is thought to have drastically declined due to an increase in human activities, habitat fragmentation and predation by the invasive Boa constrictor as well as feral cats and dogs. However, recently there seem to be more rabbit sightings in rural and wilderness areas and also in the National Park. This could be linked to a recent decline of the invasive Boa population after the long period of drought. As the Conew can reproduce very quickly, a short break in predation pressure can lead to a fast increase of rabbits. Sadly, the Boas are back on the rise again with the truly wet rainy seasons we have recently experienced. This could cause a new decline in the Conew population that was just starting to recover.

You can help the Aruban Conew:
– Help reduce the Boa population; Call the Park (585-1234 during office hours) or send a private message on Facebook for us to assist in removing a Boa. We can also assist in determining whether a snake is a Boa or one of our local endemic species, the Santanero or Cascabel.

– Keep your pets nearby; make sure your dog or cat is not allowed to run off and become a
predator to our wildlife. You can also help reduce our feral dog and cat populations by making sure your pets are spayed or neutered.

– Always drive slowly and cautiously in rural and wilderness areas. Avoid driving in nature areas at night; the Conew is mostly active around sunset and sunrise, they are confused by headlights and you could accidentally hit one with your vehicle.